Nature lies. Organisms send signals to each other, and often those signals are honest--in other words, when another organism receives the signal, it can reliably use it to figure something out about the sender. Male fiddler crabs, like the one shown here, send a big, loud signal with their oversized claw. Often, that signal essentially says, "Do not mess with me." And in many cases, that's good advice. Sometimes, though, it's a major bluff. Male fiddler crabs dig burrows to which they try to attract females. The crabs mate, and the females stay in the burrows to lay their eggs. The good burrow-digging real estate is limited, and so many male fiddler crabs end up wandering around, in the hopes of throwing another male out of his burrow and taking it over. A male crab in a burrow will raise up his big claw from time to time to signal his presence, and if a wandering male gets too close, he will raise it up faster. In many cases, an approaching male will break away at this point. If he doesn't, the two males may engage in a kind of crustacean wrestling match. They use their giant claws to try to grab their opponent and flip him over. The flipped crab skitters off in defeat. Sometimes a crab will try to stay in its burrow, and sometimes the challenger can use his big claw to drag him out. The big claw on a fiddler crab is fascinating for another reason: if a bird or another male crab grabs the claw, he can swiftly sever it. The attacker is left holding a claw but nothing else, and the crab escapes. Several species of fiddler crab then regenerate a new claw to take its place, which the males then use in future battles. Australian researchers who surveyed the fiddler crabs in a reserve found that about seven percent of the male crabs had regenerated claws. The claw of a fiddler crab is not just a weapon. It's also a signal. If you see a big claw, you can rest assured it can generate a lot of force. Crabs with bigger claws can clamp down harder than crabs with smaller claws, and they can pull harder. Both of these traits are crucial for winning fights with other males. And it's the claw in particular that relays this signal, independent of the overall size of a crab's body. Males pay close attention to these signals, it turns out. If they face a challenger with a bigger claw than their own, they're more likely to avoid combat, or to break off a fight quickly. 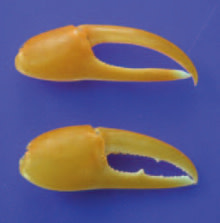 Something odd happens when fiddler crabs regenerate their claws. The claws often grow back to their original size, but they are slimmer. A slimmer claw has less room in it for muscles. Simon Lailvaux of the University of New South Wales recently tested the performance of regenerated claws and found that they do a lousy job of clamping and pulling. Even more significantly, the size of a regenerate claw is not a good clue on its own about how well a crab would fight. (Bigger regenerated claws don't necessarily clamp or pull better than smaller ones). What makes these results all the more striking is that crabs don't seem to be able to tell the difference between original claws and regenerated ones. A crab with a big regenerated claw can get a crab with a small original one to back down--even though he would probably beat the crab with the regenerated claw. It appears that crabs do not pay much attention to the fine details of the shape of claws, but just use the overall size to decide how to behave against an opponent. That means that crabs with regenerated claws are sending dishonest signals. It's not clear why male crabs don't regenerate strong claws again. There may be some limit to their powers of regeneration. It's conceivable that the crabs have evolved not to waste a lot of energy building a big new claw, since their opponents have such trusting natures. It's also intriguing to consider why crabs keep on trusting claw size as a reliable clue to how they'll fare in a fight. There's good reason to think that while the rule isn't perfect, it works well enough. The chances are low that a male crab will encounter a bluff. It's better to err on the side of safey in a fight than to err on the side of distrust. And so the crabs allow deception to thrive. For more on deception in other animals, you can read this article I wrote in the New York Times a couple years ago. [Image of male fiddler crab, Uca mjoebergi. Copyright Tanya Detto. Image of claws from Functional Ecology]