You Can't Make Chocolate Milk By Feeding a Cow Chocolate 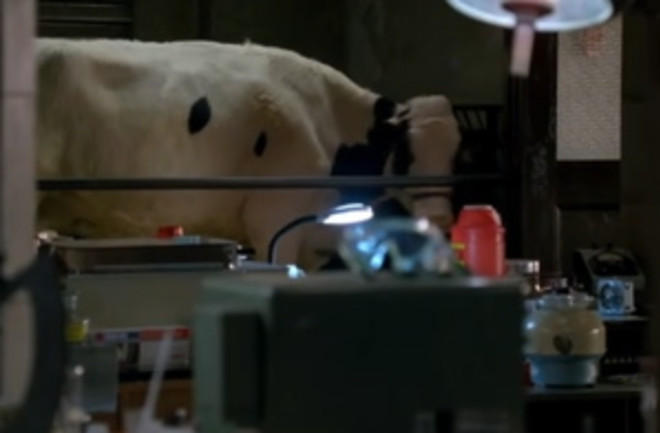 In last week's episode of Fringe , the man who is fast becoming my favorite mad scientist, Walter Bishop, tried to make a cow lactate chocolate milk by feeding it cocoa beans. Obviously this doesn't work. Which is too bad. I spent a lot of time trying to see if one could flavor milk by feeding cows different things, but unsurprisingly, their stomachs digest most of the flavor out of what they eat. Not that feed is irrelevant. As it happens, putting turmeric and coriander into cattle feed may reduce the production of global-warming inducing methane, according to research from Newcastle University in the United Kingdom. Methane is actually much more effective at trapping heat than carbon dioxide, so the vast quantity of methane produced by the world's millions of cows and sheep is a significant contributor to global warming. Mostly it's the bacteria that live in the cows' digestive tract that produces the methane. The Newcastle researchers put cloves, cinnamon and cumin, in addition to the turmeric and coriander, into a solution that includes cow rumen, the bacteria that lives in the cow's digestive tract. They found that the coriander and turmeric reduced the bacteria by 40 percent. But it doesn't make the resulting beef taste like curry, sadly. Feed does influence the taste of milk to a limited degree. A taste test conducted by the University of Missouri in 2008 found that customers preferred both conventional milk and pasture-fed milk to organic milk. And trained taste testers in 2007 found they noticed a distinct grassy flavor when they compared pastured cows to conventionally fed cows (conventional feed is a mix of grains and grasses balanced to meet the nutritional needs of penned cows). So, sorry Walter. Perhaps next time you go to try and change the taste of the milk, you should consult the vast wealth of agrarian science already available, or at least this handy website. It'll save you some time, and reduce your crazy maybe a little.