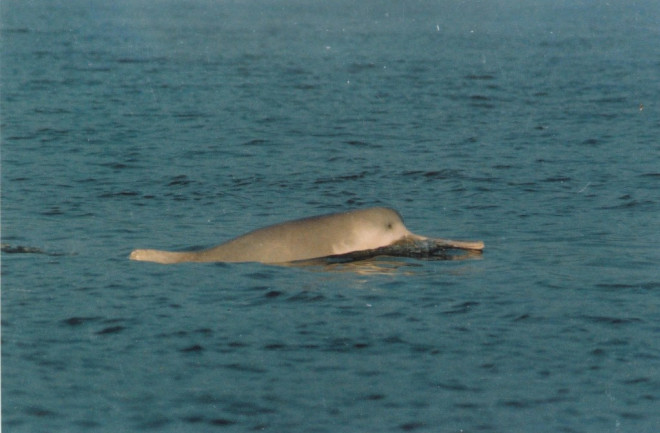 A free-ranging baiji swims in China's Yangtze River in this undated photo. Credit: Kaiya Zhou The verdict is in regarding the recent extinction of a Chinese river dolphin: humans, not a glitch in the animal's genes, were responsible. Researchers reconstructed the entire genome of a baiji (Lipotes vexillifer), or Yangtze River dolphin, using tissue remains from a specimen frozen since 1985. The baiji, poetically known as the "Goddess of the Yangtze," is a symbol of the challenge of marine conservation in the face of expanding human activity.

As recently as the 1950s, there were an estimated 5,000 baiji living in China's Yangtze River. The country's rapid industrialization, however, resulted in habitat loss and water pollution. That coincided with a rapid decline in the dolphin's numbers. The last confirmed baiji sighting was in 2004. Two years later, after a broad survey failed to find a single animal, the species was declared "functionally extinct." A research team has now sequenced the genome of a male baiji and then resequenced the genomes of three additional specimens to create a broader understanding of the species' evolution. The findings appear today in Nature Communications.

Researchers found evidence for a genetic bottleneck that reduced diversity in the species some 10,000 years ago, coinciding with a rapid decrease in global and local temperatures. However they concluded there was no genetic reason for the animals to go extinct, and that human activity alone was to blame. Although the researchers who sequenced the baiji's genome focused on reconstructing the species' past to understand its evolution, the results of their work could one day be used to resurrect "the Goddess of the Yangtze" through de-extinction.