The monk may have even mummified himself. 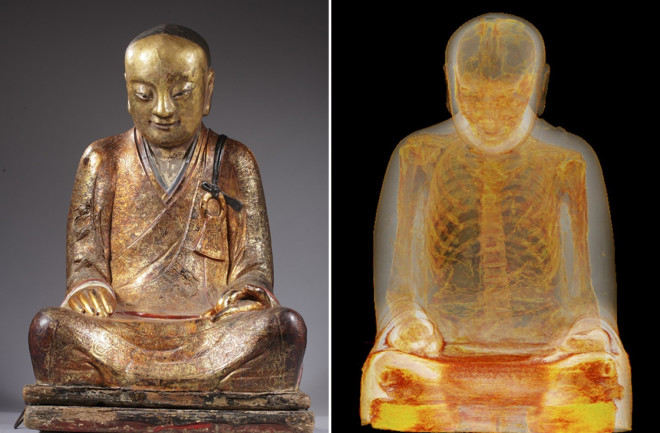 It’s not surprising that Southeast Asia is home to countless ancient Buddha statues, but when one of those statues contains a mummified monk, that is certainly a surprise.

A mummified monk is exactly what researchers at the Netherland’s Meander Medical Center found when they placed a 1,000-year-old Chinese Buddha statue inside a CT scanner. Researchers believe the statue contains the body of a Buddhist master named Liuquan, who may have practiced the tradition of “self-mummification” to reach his final resting place.

One of a Kind

Researchers weren’t completely surprised by what the scans revealed. They knew there was a mummified body within the statue, but they didn’t know much else about it.

Buddha statues containing mummified monks are quite rare and this was the first time this particular statue was released beyond the borders of China. The statue had been displayed in a mummy exhibit last year at the Drents Museum in Netherlands, which yielded the perfect opportunity to examine it in more detail.

Scientists and medical staff performed the CT scan that revealed Liuquan’s mediating body in full detail. They also used an endoscope to examine the abdominal cavity of the mummy inside, and they discovered that the organs had been removed and replaced with paper scraps that were printed with ancient Chinese characters. It isn’t clear what specifically was written on those paper scraps.

If you were a monk that wanted to achieve enlightenment and be revered as a “living Buddha,” self-mummification was your brutal option. Monks on this spiritual path would starve themselves for almost a decade, subsisting on water, seeds and nuts. Then, they’d be sealed inside the statue and ingest roots, pine bark and a toxic, tree sap-based tea for another 1,000 days — eating and breathing through a small tube. Eventually death would come, and monks mummified in this manner were said to have reached enlightenment.

According to the Drents Museum, this Buddha sarcophagus is an example of self-mummification. However, the fact that his organs were removed and replaced with paper suggests that may not be true.

Regardless, let’s hope sealing yourself inside a statue while surviving on toxic tea isn’t the only path to true enlightenment.