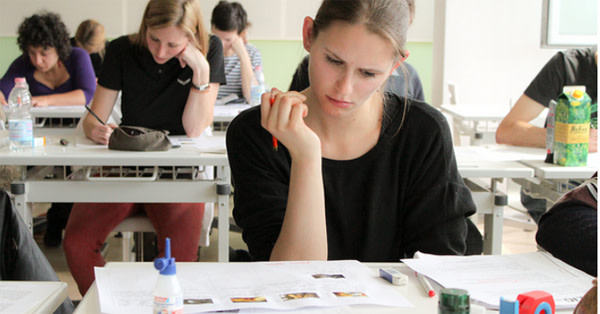 It’s a feeling you’ve almost certainly experienced before – the fear of waiting for an exam to start, heart thumping, palms sweating and brow furrowing. You worry about whether you’ve prepared adequately, and about the consequences of failure. So why not write these worries down? Gerardo Ramirez and Sian Beilock have found that students do better in exams if they spend the prior ten minutes writing about their worries. Even better, the most anxious students showed the biggest improvements. People often choke under pressure, performing far worse that they ought to. There are many reasons for this. For physical tasks, such as taking a penalty kick in football, people under pressure become overly conscious about their own actions. This disrupts the automatic side of familiar movements, turning experts into rookies. For mental tasks, anxieties about performance compete for the same mental resources that we need to succeed. In particular, these worries crowd out our working memory, which juggles small pieces of information and keeps is focused on the task at hand. Beilock is something of an expert on these issues. As the author of Choke, she has literally written the book on the topic. Together with Ramirez, she reasoned that writing exercises might help to reduce pre-exam worries, freeing up enough resources for working memory to function at its best. It was a sound idea. After all, psychologists have used expressive writing to help depressed people from spending too much time ruminating over their thoughts. At first, Ramirez and Beilock tested their solution in the laboratory. They asked 20 college students to take two advanced arithmetic tests and put them in a high-pressure scenario, involving the prospect money and the judgment of peers. Before the first test, the students were simply told to do their best. Before the second test, they were told that they had been paired with a partner, who had already finished and improved on their original score. If the volunteer could do the same, both partners would earn money. If not, neither would get anything. To make things worse, their performance would be filmed and watched. Before they started the second test, half of the students sat quietly and the other half wrote openly about their thoughts and feelings on the pending exam. Ramirez and Beilock found that although both groups scored similar marks after the first relaxed test, the ‘writing’ group did much better at the second intense test. Their scores improved, rising by an extra 5%. By contrast, the students who sat quietly actually did worse; their marks were 12% lower.

But was it the act of writing itself that did the trick? To answer that, Ramirez and Beilock ran the experiment again with 47 new students. This time, some of the volunteers who were asked to write about a completely unrelated topic. They too choked under pressure, scoring less in the second test than in the first. Once again, only the students who wrote about their worries improved. Their words contained a slew of negativity (“I am afraid I am going to make a mistake”). But far from weakening their resolve, the essays provided them with psychological relief. In fact, Ramirez and Beilock found that the amount of negative content in the writing was proportional to the students’ improvements. When they adjusted the final scores for the proportion of negative sentences, the two writing groups came out equal. Encouraged by these early results, Ramirez and Beilock tested their simple exercise in a real setting, with ninth-graders about to sit their final high-school biology exam. They worked with 51 students in one year and 55 from another. Six weeks before the exam, the duo asked the students how anxious they were. When the fateful hour finally arrived, the students found a surprise. They each had personalised envelopes on their desk containing instructions for a 10-minute writing exercise. Half of them had to write about their thoughts on the coming exam, while the other half had to write about an unrelated topic. Only then did they sit the exam. Their final scores revealed that the writing exercise cancelled out the negative effects of anxiety. If the students wrote about unrelated topics, their scores were lower the more anxious they were. If they wrote about their worries, their earlier anxieties had no effect on their marks. And when Ramirez and Beilock divided the students into two groups according to how anxious they we, only the high group benefited from the exercise. 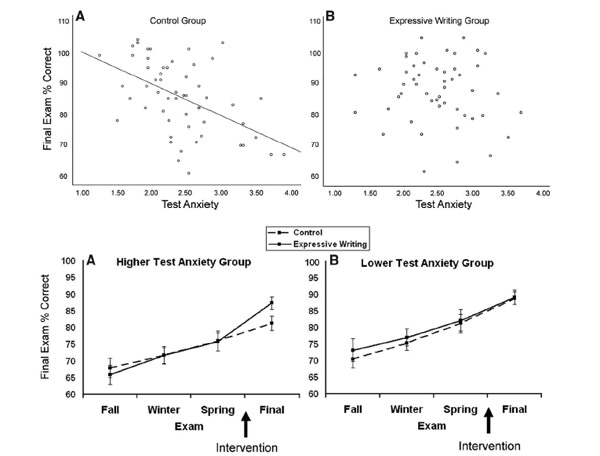 It might strain belief that such dramatic results would come from such a straightforward task. But this isn’t the first time that a deceptively simple writing exercise has helped to alleviate seemingly substantial problems. For example, Geoffrey Cohen has found that a 15-minute writing exercise could close both the gender gap in university-level physics, and the gap between black and white high school students. Cohen’s work had obvious practical implications, and so does Ramirez and Beilock’s study. Nerves get the better of even the most capable students but they have found a simple way of helping the anxious ones to perform at their true level. The duo has shown that the key to overcoming our anxieties is not to push them to the side, but to confront them. As they say, “[Bringing] testing pressures to the forefront enhances the likelihood of excelling, rather than failing, under pressure.” Reference: Ramirez & Beilack. 2011. Writing About Testing Worries Boosts Exam Performance in the Classroom. Sciencehttp://dx.doi.org/10.1126/science.1199427