A remote island that harbored the world's last mammoths is becoming a holdout for Arctic wildlife once again. 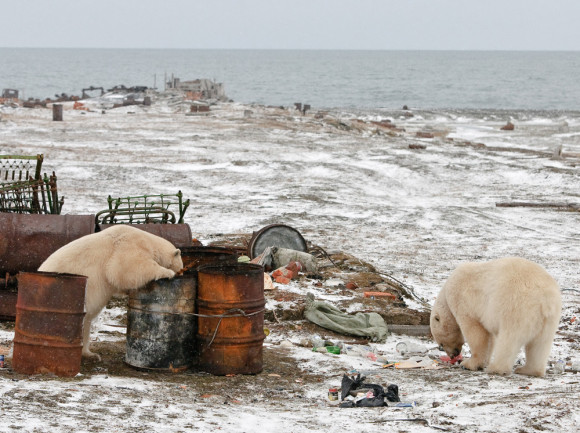 Polar bears dig through discarded barrels on the island, searching for calories wherever they can find them. 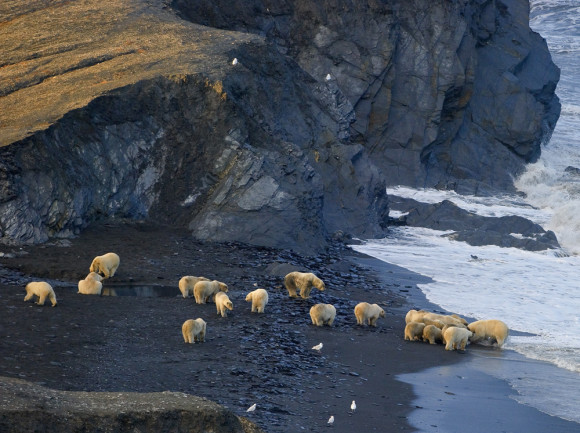 In the absence of sea ice for hunting seals, polar bears resort to scavenging carcasses on land. 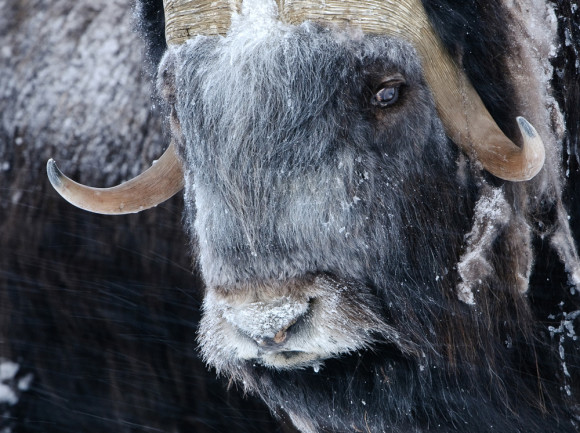 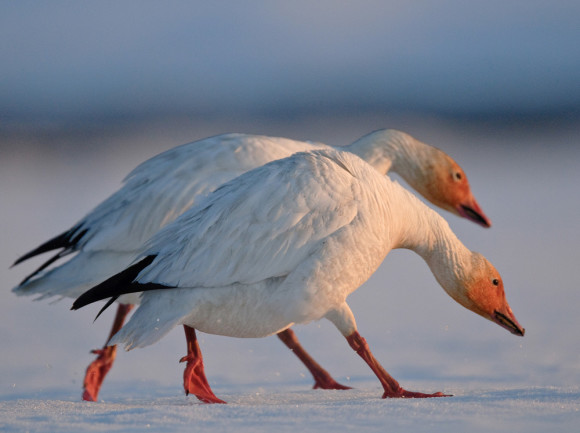 The only population of snow geese in all of Asia breeds on Wrangel island. The population’s numbers are now recovering from historic lows. 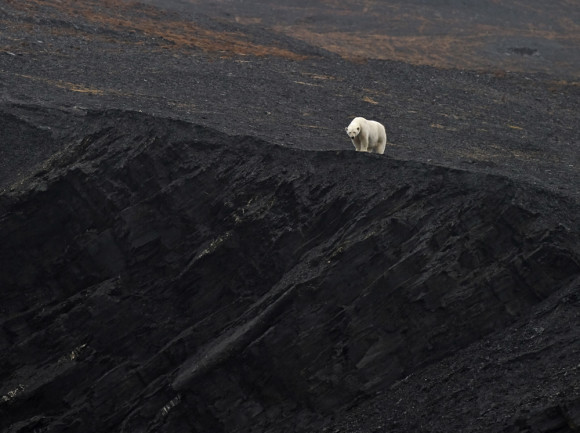 The white fur of the polar bear contrasts with the dark, bare earth of the cliffs. 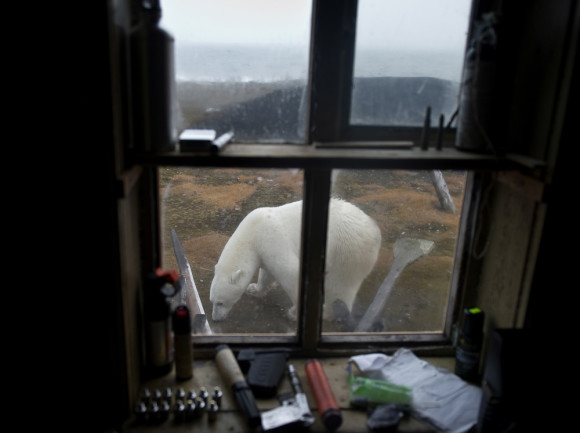 A polar bear can be seen through the window in one of the few buildings on the island. As the human presence on Wrangel grows, some fear an increase in conflicts between bears and people. 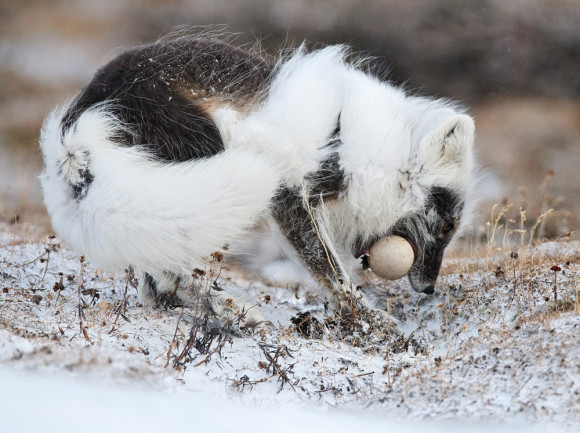 Seasons mark stark contrasts on Wrangel Island, as embodied by this arctic fox, mid-molt from its winter to summer fur. 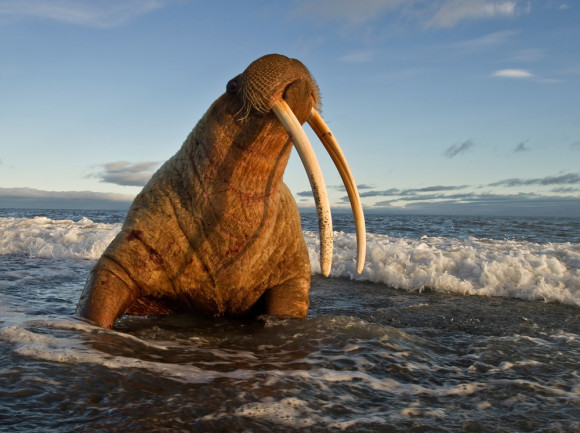 Wrangel Island is home to the world’s largest population of Pacific walrus, Odobenus rosmarus. In ice-free years, between 80,000 and 100,000 walruses gather in coastal rookeries.

A herd of muskoxen, Ovibos moschatus, traverses Wrangel Island. A population of 20 muskoxen were reintroduced here from Canada in 1975. Paleontology records show that the animals lived on the island during the late Pleistocene. 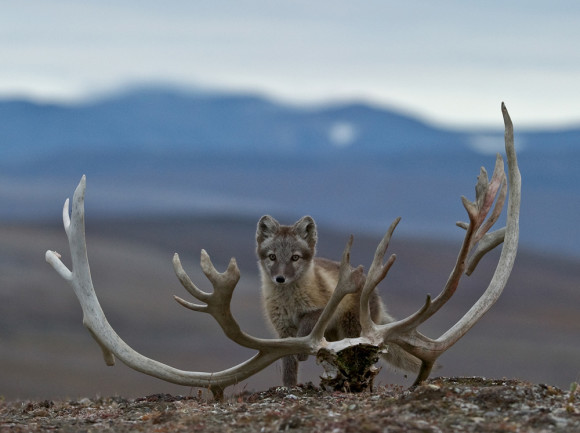 “Wrangel Island is wild nature at its best,” says Joel Berger, wildlife biologist at Colorado State University. “It’s spectacular.” At 7,600 square kilometers (2,900 square miles), the island is roughly the size of Yellowstone National Park. Its low, rounded mountains are arranged in ridges like a corrugated tin roof, and its wide coastal plains spill into the Arctic Ocean.

The island was named after a 19^th century Russian explorer who inferred its existence by observing seasonal bird migrations and listening to stories from indigenous people in northeastern Siberia. Today, the island and its surrounding waters are classified as a zapovednik—the highest level of environmental protection afforded by the Russian government—as well as a UNESCO World Heritage site. These designations are a testament to the island’s rich diversity of plant and animal life, some of which found its way here thousands of years ago.

An arctic fox, Vulpes lagopus, standing next to a reindeer skull on Wrangel Island.

These photos originally appeared in bioGraphic, an online magazine featuring beautiful and surprising stories about nature and sustainability. 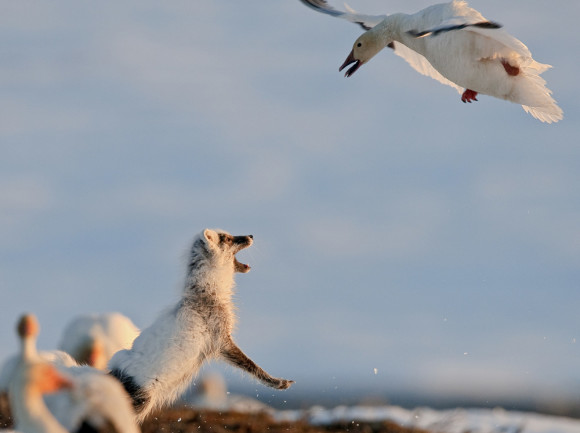 Snow geese, Chen caerulescens caerulescens, defend their nests and the eggs inside them from hungry Arctic foxes, Vulpes lagopus. 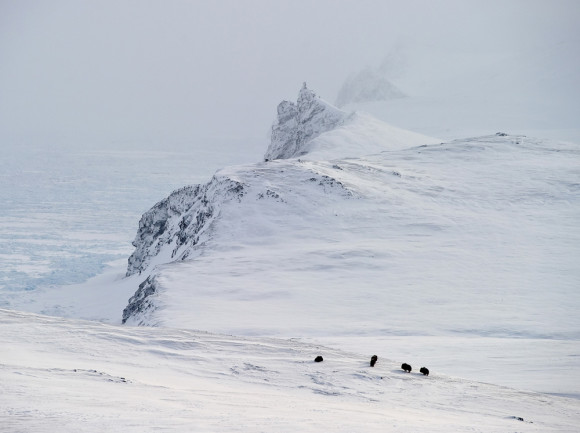 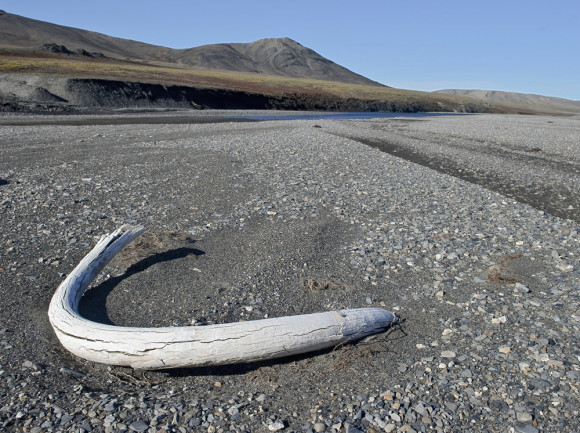 Mammoth tusks protrude from Wrangel’s beaches—relics from its earlier era as a sanctuary. 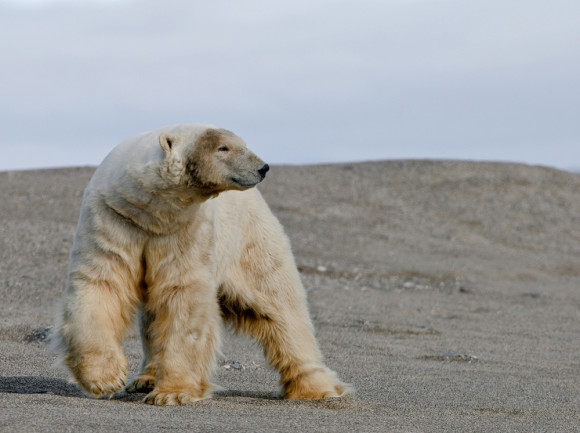 A polar bear, Ursus maritimus, combs one of Wrangel Island’s many beaches, perhaps looking for a carcass washed up onshore.