Worms Eat Impenetrable Sea Urchins by Crawling into Their Mouths 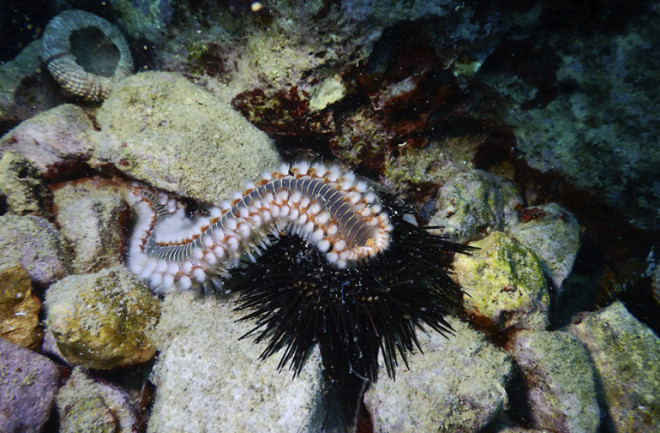 Sea urchins living in the Mediterranean have a new enemy: the bearded fireworm. This toothless but determined predator has found a way to devour sea urchins, despite their spines and stony shells. And the worms’ appetite for urchins might remake entire ocean ecosystems.

The bearded fireworm, Hermodice carunculata, grows up to a foot long and is fuzzy, not in the cute way but in the “DO NOT TOUCH” way. The white tufts that run along the worm’s body are clusters of stinging bristles. The species lives in tropical coastal waters along both sides of the Atlantic Ocean. In recent years it’s also become more common in the Mediterranean, and in the past decade its population has surged along the coast of Italy. The reason for this surge is “still unclear,” says Roberto Simonini of Università degli Studi di Modena e Reggio Emilia in Modena, Italy.

When Simonini and other researchers collected fireworms from the water and brought them back to the lab, the worms regurgitated “huge numbers of spines,” says coauthor Sara Righi. The scientists had also noticed that in the wild, fireworms sometimes appeared to attack sea urchins. And urchin shells lay on the seafloor, empty and stripped of their spines. The researchers decided to investigate whether the newcomer worms were eating sea urchins—somehow.

Sea urchins wear impressive armor to protect themselves as they crawl along the seafloor, grazing on plants. They have a hard shell called a test, and a full-body coat of dense spines on top of that. The animals that prey on sea urchins often have strong claws or teeth that can break through their armor.

So the scientists didn’t expect fireworms to be able to get a bite out of an urchin. “They have no arms, nails or jaws to manipulate and break open the hard shell,” Simonini says. But when the researchers put both animals in a tank together, they saw differently.

Five times, the scientists put three Paracentrotus lividus sea urchins into a tank with 25 hungry bearded fireworms. For an hour or two, the worms moved around the tank without paying attention to the urchins. But when a worm happened to bump against an urchin, it sprang into action. The other worms followed, swarming their spiny victim.

Some worms latched onto the sea urchin’s body, turning their throats inside-out and beginning to gobble up spines. Other worms worked on flipping the sea urchin over. Once they’d pried the urchin off the floor of the tank, its mouth was exposed.

The sea urchin’s chewing apparatus is a complex organ called Aristotle’s lantern. The scientists watched a worm latch onto this structure and suck it off the urchin’s body entirely. Then the worm would crawl into the hole it had created and eat the sea urchin from the inside.

Even if you’re Team Fireworm, this behavior is concerning. That’s because sea urchins are important engineers of ocean ecosystems. Righi explains that P. lividus feeds on algae that would otherwise grow into tall seaweed forests. When lots of P. lividus sea urchins graze in an area, it becomes barren and rocky, allowing different types of algae to grow. The movement of bearded fireworms into the Italian coasts could reduce sea urchin populations and upset the balance between ecosystem types.