Wormholes in old books preserve a history of insects 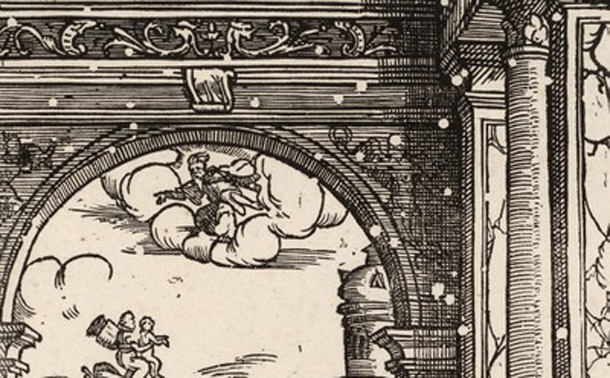 Absence can speak volumes. The lack of sediment in a flat piece of ground—a track—can testify to the footstep of a dinosaur that once walked on it. The lack of minerals in a solid shell—a hole—can reveal the presence of parasite that was once trapped in it. The world’s museums are full of such “trace fossils”, but so are many of the world’s art galleries. The image above is taken from a woodcut currently residing in Amsterdam’s Rijksmuseum. It was made by etching a pattern into a block of wood, so that the remaining raised edges could be dipped in ink and used to print an image. These woodcuts were the main way of illustrating European books between the 15^th and 19^th centuries, and were used for at least 7 million different titles. But as you can see, the print is littered with tiny white holes. These are called wormholes, and inaccurately so—they’re actually the work of beetles. The adults laid their eggs in crevices within the trunks of trees. The grubs slowly bored their way through the wood, eventually transformed into adults, and burrowed their way out of their shelters. The artists who transformed the tree trunks into printing blocks also inherited the exit-holes of the adult beetles, which left small circles of empty whiteness when pressed onto pages.

The beetles only emerged a year or so after the blocks were carved. The holes they left must have been frustrating, but remaking them would have been expensive. So the blocks were kept and reused despite their defects, unless the beetles had really gone to town. The holes they left behind preserve a record of wood-boring beetles, across four centuries of European literature. These holes are trace fossils. They’re evidence of beetle behaviour that’s been printed into old pages, just as dinosaur tracks were printed into the earth. Now, Blair Hedges from Pennsylvania State University has used these fossils to study the history of the beetles that made them. Hedges is an evolutionary biologist, and he has studied the evolution of life right from its very origins through to the rise of back-boned animals. But he also has a fondness for more recent history. He loves Renaissance art and history, and his main website is adorned with pictures of woodcuts. (He has another site with scanned images of 1,100 historical maps from the Caribbean.) Hedges chose not to study actual woodblocks, even though many are well-preserved. That’s because even now, these can still attract new beetles that leave fresh wormholes in the wood. There’s no way of telling how old a particular hole is. Instead, Hedges looked at prints in actual books. Since the books bear their date and place of publication, Hedges could trace the provenance of each hole to a specific year and country. He studied more than 3,200 such holes, made between 1462 and 1899. Those from northern Europe, including England, Germany, the Netherlands, and Scandinavia, were round, and just 1.4 millimetres wide on average. Those from southern Europe, including Spain, Portugal, Italy and most of France, were larger, with average diameters of 2.3 millimetres. The southern holes also included many long tracks—these were made when the beetles, rather than burrowing straight out, exited from the wood in diagnonal paths that followed the grain. These two holes were made by separate species of beetle, and through a process of elimination, Hedges identified the culprits– the common furniture beetle (Anobium punctatum) in northern Europe, and the Mediterranean furniture beetle (Oligomerus ptilinoides) in southern Europe. Only these species make holes of the appropriate size, attack the same types of wood used to make woodcuts, and were found in the right continent. Until Hedges came along, we had no idea about how either species was spread historically. But the woodcuts revealed that they were separated by an invisible line, which kept the common furniture beetle to the north and the Mediterranean one to the south. For four centuries, where one beetle was found, the other was not. While the common furniture beetle is more sensitive to higher temperatures and low humidity, it seems likely that it was kept out of the south by competition from its Mediterranean cousin. But this separation is no more. Both beetles are now found throughout most of Europe. As trade and commerce across the continent increased, the beetles expanded—not just in woodblocks, but also furniture, housing materials, and more. The stable indoor environments of buildings would have sheltered them form the climatic predilections, and allowed them to gain footholds in new areas. 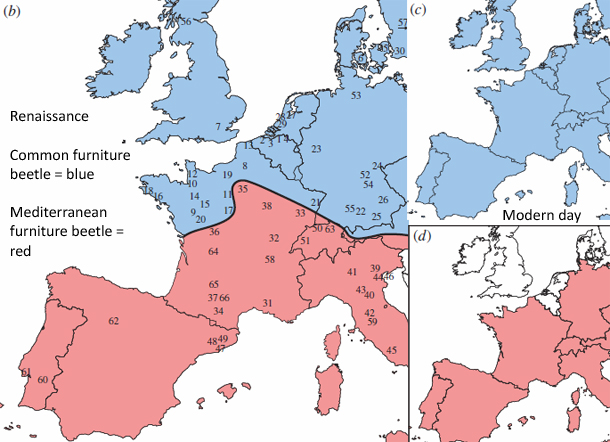 Hedges thinks that other woodcuts can tell us about the histories of beetles from other parts of the world too. “There are other regions around the world that have a long history of woodcut use, including in Japan and China, and in the Americas,” he says. “Benjamin Franklin had his own printing house in Philadelphia and made some famous woodcut prints, such as Join or Die. Different species of wood-boring insects have made their mark on those woodcuts as well, and discovering their history in the same way is now possible.” Reference: Hedges. 2012.Wormholes record species history in space and time. Biology Letters http://dx.doi.org/10.1098/rsbl.2012.0926Images: print from Rijksmuseum, Amsterdam; others from Hedges, 2012. More on trace fossils: