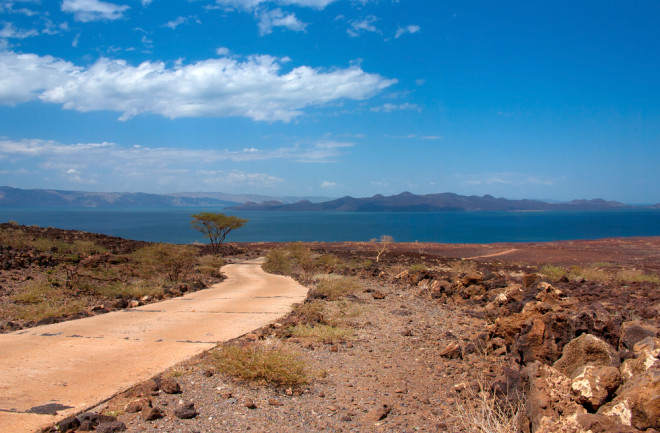 A road leading to Lake Turkana in Kenya. The tools were discovered near the lake's western shore. (Byelikova Oksana/Shutterstock) Archaeologists say they’ve unearthed the world’s oldest stone tools made by human ancestors at a dig site in Kenya. The set of 20 stone flakes and anvils, found off the shores of Lake Turkana, appears to have been crafted more than 3.3 million years ago — 500,000 years before our genus Homo, designating the first fully fledged humans, came to be. The implications, if the evidence holds up, will be far-reaching, since it has long been believed that tool-making was a skill exclusive to Homo. Sonia Harmand announced the findings this week at the annual Paleoanthropology Society meeting in California.

When exactly humans started using tools is a hotly debated topic amongst archaeologists. Until Harmand’s announcement this week, 2.6-million-year-old tools discovered in Ethiopia were considered the oldest in the world. That discovery fit neatly with the emergence of the Homo species, which was recently dated to 2.8 million years ago. In 2010, things got hairy. Archaeologists found cut marks in animal bones near the resting place of an australopithecine child — a species ancestral to the Homo genus. The team dated the cut marks back 3.4 million years, and argued that the marks were made by human forebears. Others researchers argued that the marks were the result of trampling by humans or animals. Now, with the discovery of actual tools, the theory backing the ancient cut marks’ origin is all the more convincing. As University of Wisconsin anthropologist John Hawks wrote in his popular blog:

Harmand and her team stumbled upon the ancient tools by accident. They were searching for the site where a controversial human relative, Kenyanthripos platyops, had been discovered in 1998. They took a wrong turn and found a different location with stone tools on the surface of a site called Lomekwi 3, the DailyMail reports. As they dug deeper, they found a series of sharp stone flakes that bore the telltale marks of intentional engineering. In all, they uncovered 20 well-preserved flakes, cores, anvils — used as a base to shape stones — and an additional 130 other tools. Harman dated the tools by tracking the cyclical changes in the Earth’s magnetic field, as recorded in soil sediment. She is preparing to publish the findings in the journal Nature. “The Lomekwi 3 tools mark a new beginning to the known archaeological record,” Harmand said.