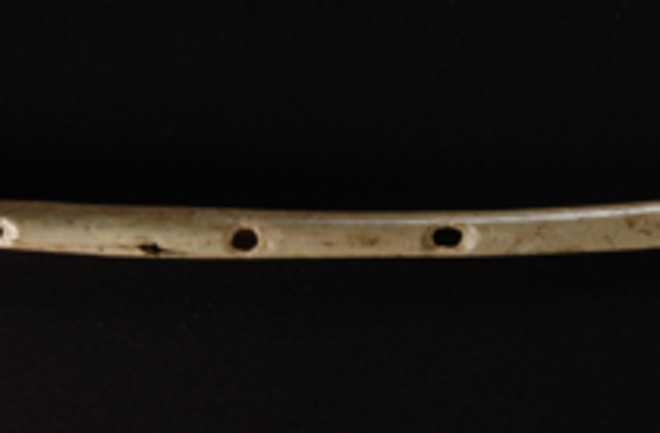 A 35,000-year-old flute made of vulture bone found in a cave in southwestern Germany is the world’s oldest known musical instrument. The artifact suggests music may have been one advantage our ancestors had over their cousins, the now-extinct Neanderthals, according to a report published in the journal Nature.

The five-holed flute, which is fully intact and made from a griffon vulture’s radius bone, was discovered with fragments of other flutes crafted out of mammoth ivory. The bird-bone instrument was found in a region in which similar instruments have popped up lately, says lead author Nicholas Conard, but this flute is “by far the most complete of the musical instruments so far recovered from the caves.” … Until now the artifacts appeared to be too rare and not as precisely dated to support wider interpretations of the early rise of music [The New York Times]. To make sure the newly discovered instruments were dated correctly, samples were tested independently and using different methods at facilities in England and Germany. Both found the bone to be at least 35,000 years old, during the Modern Paleolithic era.

The ancient flute give archaeologists a glimpse into a population that was apparently already beginning to form its own culture and traditions. The flutes show that the human society of the time was becoming modern, [comments functional morphologist Jeffrey Laitman]. They were not simply devoting their lives to finding food, he said. The flutes “are telling us about intricate and delicate communication, bonding, social events that are going on” [HealthDay News]. Conard admits it’s not definitively proven that the flutes were made by Homo sapiens, not Neanderthals. Still, he says that the presence of other artistic artifacts near the instruments, such as a busty ivory figurine, mean it’s highly unlikely Neanderthals crafted the flute.

Early humans’ budding culture might have helped them survive while the Neanderthals, which left no concrete evidence of music-making, mysteriously died off. The ancient flutes are evidence for an early musical tradition that likely helped modern humans communicate and form tighter social bonds…. Music may therefore have been important to maintaining and strengthening Stone Age social networks among modern humans, allowing for greater societal organization and strategizing, said Conard [National Geographic News]. The bird-bone flute probably produced a range of harmonic tones similar to modern flute, according to a specialist in ancient music, who reproduced another Stone Age flute made of ivory to see what the original might have sounded like.