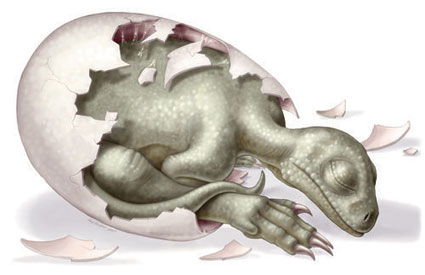 Fossilized dinosaur embryos, found still in their eggshells, have claimed the title of the oldest vertebrate embryos ever seen--they were fossilized in the early Jurassic Period, around 190 million years ago, researchers say. The embryos are from the species Massospondylus, a prosauropod, the family of dinosaurs which gave rise to iconic sauropods like the Brachiosaurus. Robert Reisz and his team found the embryos when analyzing a clutch of fossilized eggs collected in South America in 1976. The find was just published in the Journal of Vertebrate Paleontology.

"This project opens an exciting window into the early history and evolution of dinosaurs," said Professor Reisz. "Prosauropods are the first dinosaurs to diversify extensively, and they quickly became the most widely spread group, so their biology is particularly interesting as they represent in many ways the dawn of the age of dinosaurs." [BBC News] 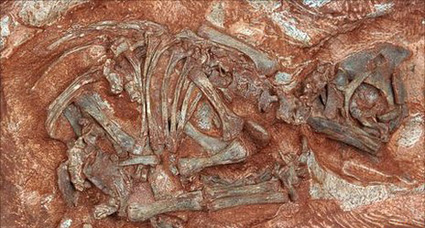 The well-preserved embryos are about 8 inches long and are detailed enough to give researchers a good look at what the juvenile Massospondylus looked like. What they found wasn't exactly elegant. The juveniles looked similar to adult sauropods like Brachiosaurus, with an oversized head and four-legged strut (unlike the adult Massospondylus, which walked on two legs).

To some extent, these dinosaurs then developed as humans do today. The infancy is "awkward," as the researchers put it, and a more erect stance and evenly-proportioned body only comes later. Additionally, the embryos lack teeth. With the awkward body proportions, it's then likely that the hatchlings would have required parental care. If that's the case, these fossils also document the oldest record of parental care, according to the paleontologists. [Discovery]

80beats: The Dilemma of the Dinosaur Stance: How Did They Hold Their Heads?

Hormonal Birth Control Might Cause the Brain's Hypothalamus to Shrink

Planet EarthDating When Dinosaurs Lived is Difficult. This Paleontologist Has Made it Her Mission