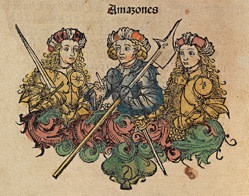 There was a time--in the 1960s and 1970s--when the phrase "Man the Hunter" enjoyed a lot of popularity. Some researchers claimed that the evolution of hunting played a key role in the origin of our lineage. That's what we made tools for, and that's how we got all the extra energy to fuel our big brains. Much of our anatomy, according to the Man-the-Hunter theory, was the result of adaptations for hunting. You have to stand tall above the savannah grass, for example, to spot your game. You need to make weapons. And a bloody-minded psychology helped too. In the 1976 book The Hunting Hypothesis, Robert Ardrey declared, "Man is man, and not a chimpanzee, because for millions upon millions of evolving years we killed for a living." And remember, it's Man the Hunter. The ladies were supposed to sit at home raising the wee ones and gather some berries. The story of hunting is a lot more complicated today, thanks to a lot of new evidence and some critical reappraisal of the old evidence. Jane Goodall discovered that male chimpanzees hunt monkeys, and since they're our closest living relatives it's possible that our ancestors were hunting millions of years before they could stand upright. And in their book Man the Hunted, anthropologists Donna Hart and Robert Sussman argue that for millions of years our hominid ancestors were more likely prey than predator. The oldest stone tools from hominids, dating back 2.6 million years, were likely stone scrapers and other items that were better for scavenging meat than taking down a wildebeest. By 1.5 million years ago, hominids may have been hunting some of their food while stills scavenging other meals. But hunting tools remained very simple for a long time. The oldest wooden spears are 400,000 years old. And the evidence keeps coming in. Today the journal Current Biology publishes yet another piece of the puzzle: female chimpanzees hunting with spears. More below... The sight of chimpanzees using tools is hardly new. They've been seen making probing sticks for snaring termites, using rocks to bang nuts, and so on. But it was surprising for a team of primatologists to see chimpanzees in Senegal using tools to hunt. On several occasions the scientists saw chimpanzees fashion sticks into spears, which they then rammed into tree hollows where little bushbabies were hiding. In one case, a chimpanzee successfully pinned down a bushbaby and was able to grab it and have a snack. The discovery adds more weight to the suspicion of some researchers that stone tools can only offer a limited picture of the history of tool use in our ancestors. Ancient hominids might well have been making simple spears and stabbing small animals for millions of years without leaving behind much evidence of their exploits in the fossil record. Studying chimpanzees may offer some clues to what they were up to--particiularly these chimpanzees in Senegal, which live in a mix of woodlands and grasslands that resembles the East African ecosystems where our own ancestors evolved for millions of years. And what's particularly intriguing in the report is the fact that of the 22 observed cases of spear-fashioning, only one involved an adult male. Thirteen were carried out by females. (The other cases involved young males.) The scientists suggest that female apes played an important role not only in the development of tools for crushing nuts and catching insects and other kinds of foraging, but also for hunting. Among our earliest ancestors, females might have spent some of their time spearing prey. If scientists can observe these Amazonian primates some more, it will be interesting to see how much they share their meat. In the forests of the Ivory Coast, scientists have found that when chimps catch small animals they tend to keep the prey for themselves. If the animals are bigger, they're more likely to share it--willingly or unwillingly--with other chimps. But big game makes up only a small fraction of their calories. Human hunter-foragers, on the other hand, share much more of their food with other members of their group. They also split the work of getting food much more strictly than chimpanzees, with men mostly providing meat and women getting the roots and fruits. Some anthropologists have argued that this division of labor and broader sharing means that humans can have a more reliable supply of food over their lifetime. However, this is not a hard and fast rule. As Harvard anthropologist Frank Marlowe observes, Austrlain females hunt lots of small animals, while men in many cultures are full-time foragers for honey and fruit. There are even cultures in which the men and women hunt together.(pdf) Man, Woman, Hunter, Hunted, Root-Digger, Fruit-Picker--harder to fit on a book cover, but perhaps closer to our complicated reality. Current Biology has a couple movies you can watch, although they don't have close-ups of kills. See also National Geographic for more information.