Wolves Have Dogs to Thank for Their Dark Fur 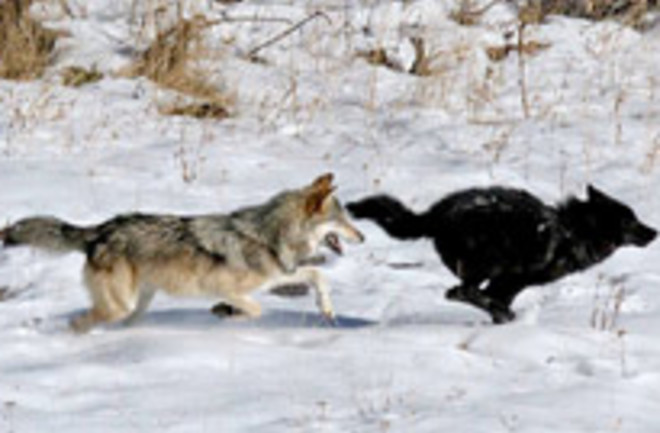 Thousands of years ago a few bold wolves moved into a human encampment, and human lives have been richer ever since. But a new study shows that domesticated dogs gave something back to their wild cousins. A genetic analysis has revealed that the dark black coats common among wolves living in North America arose through wolves mating with dogs, who already had dark fur.

The finding presents a rare instance in which a genetic mutation from a domesticated animal has benefited wild animals by enriching their “genetic legacy.” ... Because black wolves are more common in forested areas than on the tundra, the researchers concluded that melanism — the pigmentation that resulted from the mutation — must give those animals an adaptive advantage [The New York Times].

But what that advantage may be remains something of a mystery. Researchers at first wondered whether dark coats help forest wolves blend into their surroundings. But wildlife biologists say that wolves don't rely on camouflage for protection (they don't have many predators, anyway) or to escape notice when they're hunting, so the trait must confer some other advantage. Researchers note that the

same protein responsible for coat color differences in dogs and wolves is associated with fighting inflammation and infection in humans. Thus, it "might give black animals an advantage that is distinct from its effect on pigmentation," Barsh said [AP].

In the study, reported in Science [subscription required], researchers determined that the mutation that causes dark fur first occurred around 45,000 years ago. Then

a molecular-clock analysis showed the mutation was oldest in dogs, suggesting it originated with them and then spread to wolves and coyotes through interbreeding [Wired News].

North American wolves probably picked up the trait between 15,000 and 12,000 years ago, when people crossed the Bering Land Bridge from Asia and spread out over the continent--domesticated dogs in tow. Now, among

the gray wolves in North America, the number of dark wolves in a given population can range from 10 to 70 percent. Worldwide, the only other wolves known to have darker coats are in Italy [National Geographic News].

Related Content: 80beats: Are Wolves Interbreeding Themselves to Extinction? DISCOVER: Ascent of the Dog DISCOVER: Return of the Wolves to Yellowstone Park Image: Daniel Stahler/NPS