In the X-Men comics, the superhero Wolverine is armed with three sharp claws on each arm. They extend through the skin of his hand, and the resulting wounds are closed by up his superhuman ability to heal. Now, in a bizarre case of life imitating art, scientists from Harvard University have discovered that a group of African frogs use similar weapons. 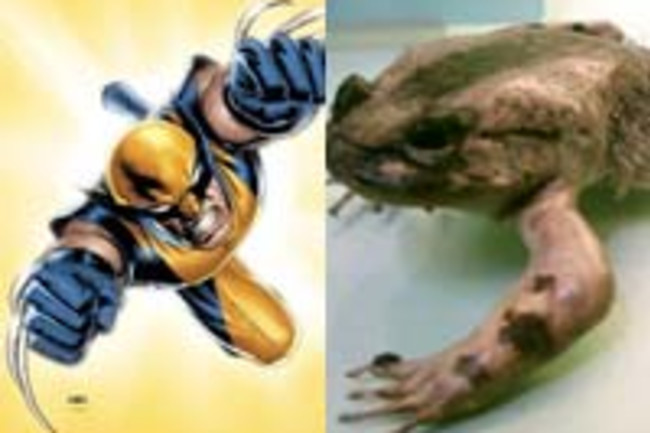 The frogs defend themselves with sharp bone claws on their hind feet but to do so, the animals have to drive the claws through their own skin. It's an extreme defence that is completely unique in the animal world.

The clawed frogs belong to a family called Arthroleptidae that were discovered in Central Africa more than a century ago. At first, people wondered if the claws just stuck through the skin as a side effect of the preservation process. Alternatively, the frogs may have used them to grip or climb. Their true function as defensive weapons only became clear when naturalists first described actually picking up and handling live animals.

Doing so is a mistake, and anyone who makes it is punished with a series of deep, bleeding wounds inflicted by the struggling animal as it kicks out violently with its claws. The ability is well known to the people of Cameroon, who only ever hunt the frogs with machetes or spears.

David Blackburn from Harvard University revealed how the claws work by studying 63 specimens housed in museums. Two genera in particular - Astylosternus (the night frogs) and Trichobatrachus (the hairy frog) - have well developed claws on eight of their hind toes. Claws are, of course, very common in the animal kingdom and cats also have retractable claws on their feet. But those of the frogs are completely unique for several reasons. 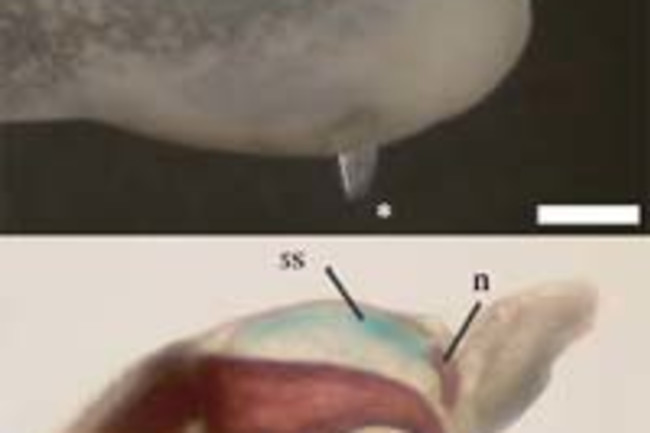 For a start, they are made of naked bone and lack the sheath of keratin that covers the claws of all other land-living back-boned animals. The way they work is special too. When the claw is 'at rest', it lies completely within the flesh of the toe, held in place by a small, bony nodule, which is in turn anchored to the frogs' skin. The nodule holds the claw in place, and prevents it from being accidentally extended while the frogs go about their day-to-day business.

When the frogs are threatened, they flex a muscle that connects to the lower half of the claw. This severs the connection to the nodule and pulls the claw downward. Its barb-like tip is made of reinforced and thickened bone, which easily pierces through the skin of the toe.

Among back-boned animals, no other claw needs to pierce its way to use. Only salamanders use a comparable technique; some species jab their bony ribs through special sites in their skin that contain poison glands. And unlike the toes of cats, the frogs have no permanent slots through which the claws extend. Every time they are used, they create new wounds. In the X-Men movie, Wolverine, when asked if it hurts to pops his claws, answers, "Every time." One can't help but think that the same is true for the frogs.

Blackburn isn't sure what happens after the frog has deployed its secret weapon. It may be that the animal cannot actively retract the claws and has to wait for them to passively return to the 'cocked' position. Nor do we know if the broken connection between the bony nodule and the claw will regrow.

However, many amphibians have extraordinary healing abilities that can even regenerate severed limbs. It may be that the clawed frogs, like their comic-book counterpart, have a 'healing factor' that closes up the wounds that open every time their claws are used.