With Robotic Rectum, Doctors Practicing Prostate Exams Are No Longer In the Dark 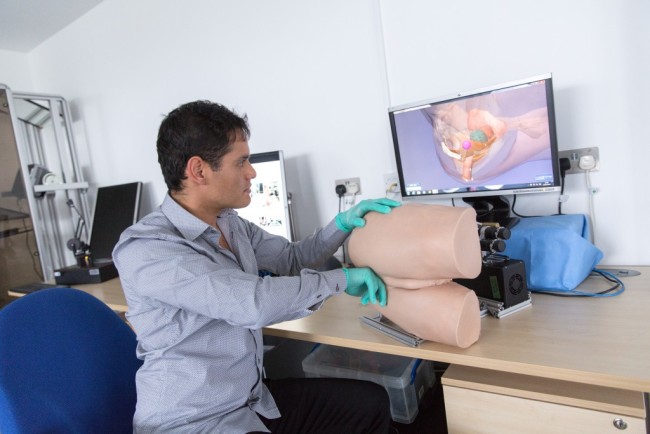 The rectal exam is a delicate art to learn. Doctors perform this procedure entirely by feel, with just one finger. Students who are learning how to do such an exam have no way of showing their work to their teachers. And volunteer subjects are—unsurprisingly—rare. In the entire United Kingdom there's only one person registered as a test subject for rectal exams, says Fernando Bello, who works on surgical computing and simulations at Imperial College London. Rectum models made of plastic exist to help train new doctors. But these are limited in how much they feel like the real thing. That's why Bello and his colleagues built a robotic rectum. On the outside, the teaching tool (shown in the photo above getting an exam from Imperial College London's Alejandro Granados) looks approximately like a disembodied rear end. Inside, squishy robotic elements recreate the feel of a patient's prostate gland and other anatomy. The model's robotic parts both track the examiner's finger and push back on it in a realistic way, Bellos explains. "The position of the finger is sent to the simulation software," he says, "which can then detect when the finger collides with anatomical regions and generate adequate reaction forces." The device can even be programmed to match different anatomical specifications. When Bello and his colleagues took MRI scans of volunteers, they found a lot of variation in the sizes and shapes of people's rectums and prostates. Being able to program the robotic rectum means doctors could practice on a range of anatomies that represents human variation better than an unchanging plastic model does. Meanwhile, a computer screen shows a 3D image of what's happening inside the robotic patient. Researchers presented the technology at the Eurohaptics conference earlier this month. ("Haptic" technology is the intersection of computer science and the sense of touch.) Bello says the next frontier in robotic anatomy is the female pelvis. "We are already working on bimanual vaginal examinations," he says. The haptic technology is similar, "but of course the virtual anatomy is that of a female patient rather than male." This model is even more challenging to build than a robotic rectum, Bello says, because a doctor doing a female pelvic exam uses two hands—one inside and one outside the body—to squeeze the uterus or ovaries. So a robotic model has to simulate the interaction between the anatomy and both hands, rather than just one finger. But the researchers think the effort will pay off. Robotic models could be an added step in training, they suggest, after simpler models but before students practice on an actual person. By the time doctors get to examine patients, maybe the robots will have helped give their technique a more human touch. Image: Imperial College London