With Parasites, Nothing is Sacred: Study Finds Lungworms Alter How Their Host Toads Poop 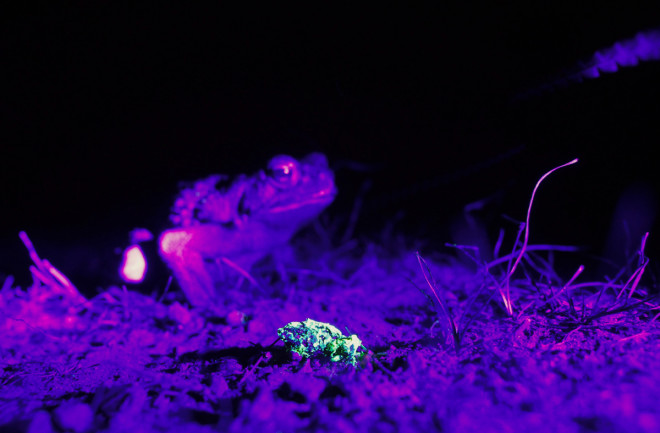 Researchers from the University of Sydney had to get creative to see how a toad lungworm alters its host's behavior. Photo Credit: Patt Finnerty Parasites are nature's master puppeteers. Jewel wasps can make cockroaches into docile, edible nannies for their young with just a sting, for example. Some nematodes convince the insects they infect to commit watery suicide because their larvae are aquatic. It's even thought that Toxoplasma gondii, a parasite that usually infects rats and cats, can alter our brains when we accidentally host them instead, subtly altering our personalities and maybe even making us more likely to commit suicide. So perhaps it's not surprising that scientists recently discovered lungworms alter the behavior of their cane toad hosts to ensure things are most comfortable for them. But what is surprising, or at least a little unnerving, is what they actually do: the worms makes their hosts poop differently.  The question of whether the parasites were manipulating toads arose after Patt Finnerty noticed that infected toads acted a little differently in other lab trials he was conducing. Further investigation revealed significant differences in behavior between infected and uninfected toads, particularly when it comes to their bowel movements. The findings are published in an amusingly-titled new study in the journal

The miniature manipulators. Photo Credit: Greg Brown The parasite in question is the lungworm Rhabdias pseudosphaerocephala, a nematode that primarily infects cane toads (Rhinella marina). It came to the attention of scientists because its those toads—normally native to the Americas—have become invasive pests in places like Australia after they were introduced in 1935. And with the invaders came their parasites, which have since found their way into other amphibians and are evolving rapidly at the invasion front, shifting their size and timing of the different stages of their complex lifecycles. That lifecycle involves a two-generation process with both parasitic and free-living stages. As the name implies, the parasitic lungworms live in their hosts lungs as adults feeding on blood (1). The eggs they lay there are essentially coughed up and swallowed, and hatch in the toad's digestive tract (2). As larvae, they hang out in feces, which they consume (3), and a little after the frog defecates, they molt to become free-living adult worms (4), which find one another and mate. The female worm gets the short end of the parenting stick at this point, as she retains her fertilized eggs until after they hatch (5). The offspring develop inside her until they kill her as they burst free (6). They then wait in the soil (7) until the opportunity presents itself to burrow into the next unfortunate toad that stops by (8), starting the cycle anew.

The lungworm's lifecycle. Figure Credit: Crystal Kelehear Scientists have known that these lungworms harm their host toads—which isn't surprising, since each unlucky amphibian can have nearly 300 of them inside their teeny lungs—but whether the parasites truly manipulate their hosts in any way was less clear. While some parasites make their puppeteering obvious, it's not always easy to distinguish between true manipulations and general bodily reactions to infections, which can include immunological responses like fevers or other "sickness behaviors" that occur because of an infection but don't necessarily have an adaptive purpose. Still, that's exactly what the University of Sydney researchers set out to do. They were especially interested in behaviors related to hydration, because the worms need a certain level of moisture to survive, especially while they're in the soil. So the team captured nearly 50 wild toads and kept them in captivity. Some were naturally infected, while others were not; about half of each received a dewormer, such that they ended up with four treatment groups of 11-13 toads: those that were infected and dewormed, those that were infected and not dewormed, those that weren't infected but got the dewormer anyway, and those that weren't infected and didn't receive the meds (the last two served mostly as controls). Then, over 4 months, they subjected the toads to a battery of tests including temperature and hydration trials to see if the parasite affected its host. They also conducted field studies where they captured toads, fitted them with radio transmitters so they could find them again, determined if they were infected, and then treated some of them, just like with the captive animals. They then fed them different colors of a non-toxic, UV fluorescent dye which allowed them to see where the animals defecated, and tracked where they went. The infected lab toads tended to prefer warmer areas, which seemed to benefit the parasite, as the toads' feces contained 27% more larvae when the toads were kept warm. The infected toads also spent more time in water, no matter what the temperature of their enclosure was.

Paper figure showing how infected toads spent way more time in water than those that were dewormed. Figure 1 from Finnerty et al. 2018. The researchers also noticed that infected toads defecated more often, and seemingly aimed for their water containers rather than the dry newspaper floor of their cages. When they weighed these poops out, the average wet mass of the infected animals' feces was higher than that of the dewormed ones, but the dry mass was the same—infected poops were just about 15% moister. And that was especially intriguing, because when they put the lungworm larvae through the gauntlet, they found that over 15 times as many survived after three days if the soil was moist rather than dry. The same story emerged from the field data. Infected wild toads tended to poop closer to bodies of water, and on moister soils. And when the weather was dry, the infected toads stuck much closer to water. "We found that toads with lungworms behaved much differently than uninfected toads is several regards," explained Greg Brown, a research fellow at the University of Sydney and co-author on the paper. "Most notably, infected toads tended to stay closer to water and poo in moister areas." "These are the conditions that increase survival of the larval worms in the poo and increase their likelihood of encountering a new host." It's possible that these behavioral changes are the result of an immunological assault, but the researchers think this is unlikely. "The fact that infected individuals act differently than uninfected ones isn't that surprising," Brown continued, "but the nature of the differences seemed to consistently be in directions that that should favor parasite fitness. That’s why it appears to be manipulation rather than just general sickness." And if so, then the results open a, well, can of worms, so to speak, because they are evidence that parasitic manipulation of hosts may be more subtle than scientists thought—and more common. "Lots of parasite larvae are transmitted to the environment through feces, so maybe parasite ability to manipulate host pooing is widespread," said Brown. "It seems like a logical way for the parasite to increase the likelihood of its offspring surviving and infecting another host."

A cane toad, perhaps contemplating where its next bowel movement should be deposited. Photo Credit: Greg Brown But if the worms are really manipulating their hosts, then more questions arise—like, how are the worms causing these behavioral changes? The researchers couldn't say for sure, but they're betting the worms tweak circulating cellular signals like neurotransmitters or hormones to get the toads to deposit moist, frequent poops near water. Learning exactly how they exert their control could help scientists better understand the toads' physiology, or maybe even point to novel ways of getting rid of them. Controlling an invasive species by controlling its bowels—now wouldn't that be something.