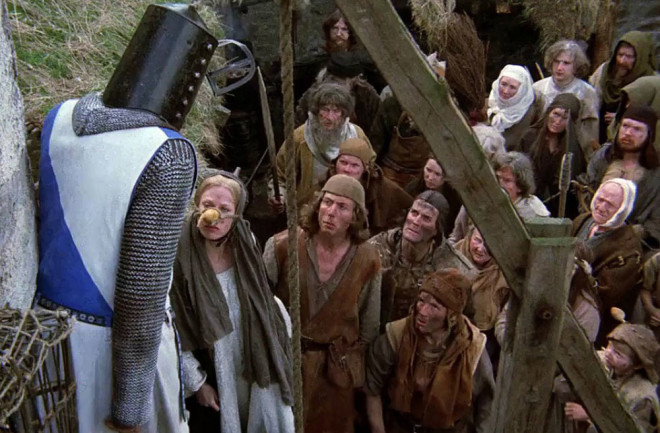 (Credit: Monty Python and the Holy Grail/Columbia Pictures) Being labeled a witch can do great harm; it did during the Salem witch trials and continues to today in many places in Africa and Papua New Guinea. Now, researchers investigating villages in China have analyzed the effects the reputation of witchcraft could have on everything from recruiting workers to getting married. It's data that could shed light on why this belief persists in societies. Scientists examined farming villages in southwestern China headed by a group known as the Mosuo. Whereas most of China is patrilineal, with children taking on the surnames of their fathers, the Mosuo are matrilineal, with children taking on the surnames of their mothers. During their work in this rural community, the researchers discovered that people were at times stigmatized with the label "zhu," which can be translated as "witch." Zhu are thought to possess the supernatural power to poison food. "People do not like to talk about this, especially not to outsiders, but we were sometimes warned not to eat in certain houses," said study lead author Ruth Mace, an evolutionary anthropologist at University College London. "Only after getting many years of data at this site did we address this question, and were well-known enough for people to tell us what, to them, was common knowledge." The label of zhu is usually given to female heads of households and often inherited by their daughters. The way in which people were stigmatized as zhu could be murky, although there were accounts of households becoming zhu after bringing something valuable into their homes. "No one admits to starting such rumors," Mace said. "Even the victims do not always know they have been accused — they just notice that they are shunned." Previous work suggested the zhu label may have emerged due to conflicts between the Mosuo and the patrilineal Han people making up most of China. For instance, one way it was said that Mosuo households could rid themselves of the zhu stigma was by changing their surnames to follow their fathers instead of their mothers. In addition, the fact that becoming zhu may be linked with gaining wealth could be a way of leveling or taking wealth from women. The researchers noted the concept of zhu had many similarities to witchcraft in other cultures. "For example, it is often middle-aged women who are victims," says Mace. "I think gendered harassment or bullying or ostracism is common across most populations, or harassment or poor treatment of people who are different in some way, so it is likely there are common underlying causes, even if specific triggers and manifestations are different in different cases." To learn more about the effects of the witchcraft stigma, Mace and her colleagues conducted interviews and experiments with roughly 800 households across five rural villages in southwestern China. They found about 13.7 percent of these households were labeled zhu, or between 1 in 7 and 1 in 8. The scientists found the social network of households was clearly divided between zhu and non-zhu when it came to cooperation. For instance, zhu and non-zhu largely did not intermarry. In addition, given that farm owners usually provide meals for those who labor in their fields all day, zhu households also were mostly excluded from trading workers with non-zhu households. Moreover, in games where people could gift money to others, zhu usually gave and received presents from other zhu and not from non-zhu. Zhu "are tolerated in villages, just avoided," Mace said. Zhu households made up for all this ostracism by preferentially interacting with each other. Still, the researchers noted that female heads of zhu households did have fewer living children, revealing this stigma had biological consequences. The researchers urged caution when interpreting their work, as the Mosuo are often subject to lurid sensationalism because of their different way of life. "It is a story about gender-based discrimination, in effect, and has to be treated sensitively," Mace said. The scientists noted the social function of the label of witch is poorly understood, with some researchers suggesting it marks uncooperative people, while others suggesting it undermines competitors. However, until now, there was little quantitive data to explore these alternatives. "We are breaking new ground quantifying this and looking at the implications for social networks," Mace said. Since Mace and her colleagues found that zhu were just as cooperative as non-zhu, they suggest their findings hint that the label of witch helps besmirch potential rivals and gain a competitive advantage in resources and reproduction. This could shed light on how such practices may persist even when one might expect beliefs related to supernatural powers to decline with modernity — in a culture where a stigma may contaminate others, even those who do not believe so-called witches are dangerous might run the risk of ostracism. The scientists detailed their findings online Jan. 8 in the journal Nature Human Behavior.