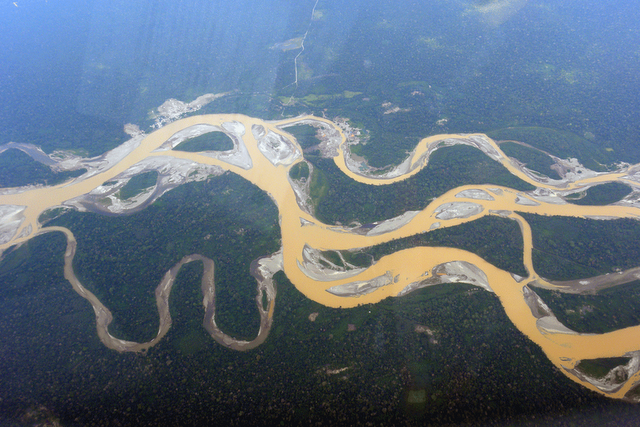 Some of you may remember that in September, I flew to Peru for a story I was writing for Wired UK. That story is finally out. It's about Greg Asner, a scientist who is scanning the Amazon by air, in an effort to study and save it. Here's how it starts:

A small twin-propeller plane flies over the Amazon rainforest in eastern Peru. The scale of the vegetation is staggering. The tree canopy stretches as far as our eyes can see – an endless array of broccoli florets bounded only by haze and horizon. Greg Asner, 43, Asner has seen the rainforest from this vantage point many times before, but he still stares out the window in rapt fascination. This patch of forest in the Tambopata National Reserve is luxuriant with life even by the Amazon’s standards. A 50-hectare patch of forest – the size of as many rugby pitches – contains more plant species than the whole of North America. “We might as well be exploring Mars,” says Asner. “You’re looking at areas where no human has ever been. There’s no access.” Access isn’t a problem for Asner. Behind him are three state-of-the-art sensors of his own devising which, as the plane flies along, takes the forest’s measure. “We’re trying to do something really new,” Asner says. “This world is changing and it requires science that isn’t incremental.” Using the technology he’s developed, Asner is mapping the shape and size of the trees down to individual branches from two kilometres overhead. He can measure the carbon stored in trunks, leaves and soil. He can even identify individual plant species based on the chemicals they contain. With wings and lasers, Asner is conducting one of the most ambitious ecology studies ever staged. He accumulates more data in a single hour than most ecologists glean in a lifetime. With this data, he means to influence governments, steer the course of climate-change treaties and save the forests over which he soars. Asner’s high-flying science has roots on the ground. In 1994, Asner was working in Hawaii for Nature Conservancy, the environmental non-profit organisation. He was frustrated. His seemingly simple task of eliminating invasive plants was thwarted by an equally simple problem – he could not find them. “We were stumbling around in the dark. That’s how I started getting into this, thinking how we could get maps of this stuff.” Satellite data was too coarse and aerial photos uninformative. Eventually, during a PhD position at the University of Colorado, Asner found his answer – airborne sensors. Fifteen years and much head-scratching later, his team has developed AToMS (Airborne Taxonomic Mapping System), a suite of three plane-borne sensors that he describes as “probably the most advanced Earth-mapping system in the world”.

I'm really proud of the piece. It was my first true taste of field reporting, the science is interesting, and it's a bit structurally more interesting than what I normally do. For the moment, you'll have to buy the issue (or subscribe to the iPad edition) to read it. I'd encourage you to do that (support science writing!) but for non-UK people, the story will be online by the end of the month, and I'll stick a PDF up in a few weeks.