Will we ever restore sight to the blind? 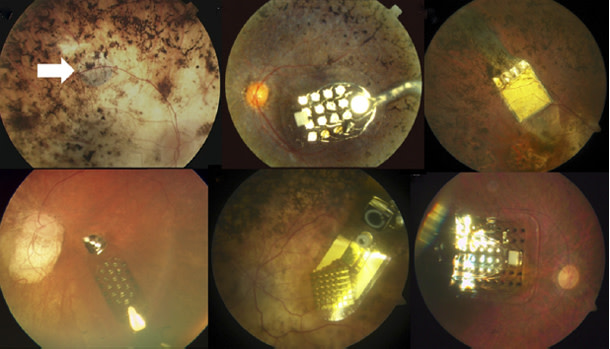 Here's the third piece from my new BBC column

A 46 year-old man called Miikka spotted a simple spelling mistake. A group of scientists had misspelled his name as Mika. He told them as much, and they responded with delight. Why? It was the clearest evidence yet that Miikka, who had been blind for many years, might be able to see again

. This miracle is thanks to a pioneering chip implanted in his retina. Just as cochlear implants have restored hearing to people once considered deaf, devices like this are being developed that can restore sight to the blind. Miikka suffers from a particular form of blindness called retinitis pigmentosa, an inherited disease that gradually destroys the light-detecting cells of the retina. As the cells die, a person’s field of view begins to collapse from the edges. Miikka’s case was so advanced that he could only sense the direction of a bright light, and he needed a cane to get around. Success in sight That changed when German scientists led by Eberhart Zrenner

implanted the tiny chip in his retina. The chip consists of 1,500 light-detecting electrodes, which stand in for the retina’s own degenerated sensors by producing an electric current whenever light falls upon them. In early trials, this was enough to restore vision at a low resolution – enough to recognise objects and read large letters. Miikka has been one of their best success so far – he could not only see spelling errors, he was also able to recognise cutlery and a mug on a table, he could read a clock face and he could even distinguish seven different shades of grey. Zrenner’s chip, produced by Retina Implant AG, is one of several “retinal prostheses” in development (see image above). So far, only one has been approved for use in Europe: the Argus II implant by California-based company, Second Sight

. Unlike the device Miikka received, the Argus II detects light with an external camera mounted on a pair of glasses, and it uses just 16 60 electrodes rather than 1,500. The two implants might look different, but the challenges in creating them are the same. Developing these implants meant years of animal experiments to understand how much current you need to produce the sensation of light. It meant creating surgical techniques for cutting a flap in the eye and attaching the devices in the space beneath the retina. It meant using “biocompatible” materials that will not send the immune system into intruder alert mode, and that can be sterilised without damaging the electronics. And it meant protecting the delicate chip from any eye-related wear and tear. “The eye is a salty warm environment. It’s very corrosive for electronics,” says Mark Humayun

from the University of Southern California, who worked on the Argus II. Limited vision But it is not simply a case of insert implant, switch on and hey presto sight is restored, says Humayun. “It’s like a broken arm that’s been in a cast,” he says. “You have to get them reoriented about how to use their eyes.” Their brains also need time to adjust. Blind people famously repurpose the visual centres of their brains towards other senses, like smell or hearing. But Humayun notes that those same areas could “drift back to serving vision again”. It has taken years to overcome these challenges, and fewer than 100 patients – all with retinitis pigmentosa – have taken part in clinical trials. But their experiences have provided all the motivation needed to plough ahead. “We had patients telling us “I was sitting in my garden and I could see a sunflower”,” says Zrenner. “One patient said he could walk around at night, because he could see streetlamps and headlights. Another told us that he saw the face of his fiancée for the first time. He could make out the shadows between individual teeth when she laughed.” That’s the good news. The bad news is that these devices have unavoidable limitations. Perfect 20/20 vision, for example, is out of the question. You need more electrodes to get a better resolution, which means making them smaller or more densely packed. If they get too small, they cannot provide enough charge to the underlying cells. If they get too close, the underlying cells cannot tell that they are separate points, and they might as well be one big electrode. “For electrical stimulation, we have a maximum limit of 20/100 vision,” says Zrenner – this means that from 7m (20ft) away, people could only read letters that were 10cm wide. Colour vision is unlikely too. The retina contains three types of colour-detecting “cone cells”, which are sensitive to red, blue and green light. Each cone hooks up to a special double-pronged nerve cell called a bipolar cell, which conveys its signals towards the brain. The retinal implants stimulate these bipolar cells, but each electrode is so big that it triggers dozens at a time, including those corresponding to all three colours. The results are monochrome images of white and grey. And do not expect these devices to remedy all conditions that can rob someone of their sight. Retinal chips can remedy those that partially damage the retina, but all the hardware in the head needs to work. That rules out anyone with glaucoma, one of the most common causes of blindness, as this damages the optic nerve that carries signals to the brain. Nor will the chips benefit people with damage to the visual centres of their brain, acquired through injury or stroke. But that does still leave millions of people with retinal diseases who could benefit from the devices. Their sight should improve to the point where they could read, and get on with daily tasks. For them, cost is the limiting factor. Second Sight is currently asking around USD $100,000 for its device. For now, only the rich (and those on clinical trials) will see again but as with all electronics, costs will fall as popularity increases. Seeking alternatives So, other sight-restoring techniques are sorely needed. Some scientists are trying to stave off the loss of retinal cells, either by bathing them in the right chemicals, or stimulating them with electricity. Others are focusing on replacing lost cells. The US firm Advanced Cell Technology has used stem cells to regenerate a patient’s dying retinal cells, which could be transplanted back into their eyes. In an early study

, two patients who were been treated in this way showed “modest improvement in their vision”. Meanwhile, Jean Bennett from the University of Pennsylvania has used gene therapy to rewrite the faulty genes

behind a rare inherited eye disease. In her pilot study, three women who were born virtually blind gained the ability to avoid obstacles and recognise faces. These studies are preliminary ones, and it will take many more years to test the techniques for safety and effectiveness. But Zrenner is thrilled that such possibilities are even on the horizon. He says, “You once had the patient sitting there and you had to say, “Look, I know what the problem is down to the right molecule, but I can’t help you.“ Now, we can say, okay, there are some options.” The future is, it seems, bright.More from Will we ever?