Will Dog Cloning Become Mainstream as the Price Drops? 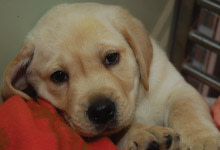 A Florida couple has just received a genetic copy of their beloved and deceased golden Labrador Sir Lancelot, naming the three-month-old puppy Lancelot Encore. The couple paid $155,000 for one of the first commercially cloned dogs in the world, and say the money was well spent.

"He was a wonderful dog," said Nina Otto, 66. "Money wasn't an object. We just wanted our wonderful, loving dog back" [ABC News].

The project was masterminded by the California biotech company BioArts. Lancelot Encore joins a handful of other dogs cloned either commercially or as a proof of concept, and the latest success seems to indicate that researchers have thoroughly overcome the scientific barriers to cloning man's best friend.

Canines are considered one of the more difficult mammals to clone because of their reproductive cycle that includes difficult-to-predict ovulations [Reuters].

Now the fate of the fledging pet cloning industry is largely dependent on whether dog lovers think that clones are worth the high price tag. However, just yesterday another cloning company announced a new technique that could reduce the cost of dog cloning to about $50,000 within three years. The Korean company RNL Bio announced that their new cloning technique has a much higher success rate than previous cloning methods, which will allow the price to drop.

Conventionally, scientists use skin cells taken from the donor to extract the DNA that they fuse with an egg to make a clone.... But last October, RNL Bio said, its scientists extracted fat tissue from the beagle, isolated and expanded the stem cells and developed 84 embryos that were transplanted into five surrogate mother dogs. One of those gave birth to two puppies, Magic and Stem, this week [BBC News].

While RNL Bio is accepting orders for commerically cloned dogs, grieving pet owners aren't the only people on the list. The company says pet owners

should be prepared for long waits because most commercial canine cloning is for working animals including sniffer dogs at airports [Reuters].