Politics, geography and tradition have long focused archaeological attention on the evolution of Homo sapiens in Europe and Africa. Now, new research is challenging old ideas by showing that early human migrations unfolded across Asia earlier. 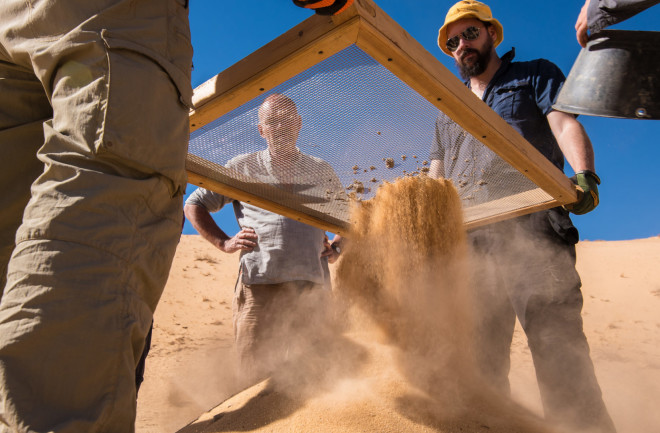 The Nefud Desert is a desolate area of orange and yellow sand dunes. It covers approximately 25,000 square miles of the Arabian Peninsula. But tens of thousands of years ago, this area was a lush land of lakes, with a climate that may have been kinder to human life.

On a January afternoon in 2016, an international team of archaeologists and paleontologists was studying the surface of one ancient lakebed at a site called Al Wusta in the Nefud’s landscape of sand and gravel. Their eyes were peeled for fossils, bits of stone tools, and any other signs that might remain from the region’s once-verdant past.

Suddenly, Iyad Zalmout, a paleontologist working for the Saudi Geological Survey, spotted what looked like a bone. With small picks and brushes, he and his colleagues removed the find from the ground.

“We knew it [was] important,” Zalmout recalled in an email. It was the first direct evidence of any large primate or hominid life in the area. In 2018, lab tests revealed that this specimen was a finger bone from an anatomically modern human who would have lived at least 86,000 years ago.

Prior to this Al Wusta discovery, evidence in the form of stone tools had suggested some human presence in the Nefud between 55,000 and 125,000 years ago. To anthropologists, “human” and “hominin” can mean any of a number of species closely related to our own. The finger bone was the oldest Homo sapiens find in the region.

The bone’s dating contradicts a well-established narrative in the scientific community. Findings, particularly from the area of modern-day Israel, Jordan, and Lebanon, known as the Levant region, have led to the understanding that H. sapiens first made their way out of Africa no earlier than 120,000 years ago, likely migrating north along the Mediterranean coast. These people settled in the Levant and their descendants — or those from a subsequent early human migration out of Africa — traveled into Europe tens of thousands of years later.

Only later, that story goes, did they journey into parts of Asia, such as Saudi Arabia. By some estimates, then, anatomically modern humans would not have been in what is now Al Wusta until about 50,000 years ago.

The finger bone, then, adds a twist to the tale of how and when our species left the African continent and, with many starts and stops, populated much of the rest of the earth. A new crop of discoveries, particularly from Asia, suggest that modern humans first left Africa some 200,000 years ago, taking multiple different routes. No longer is the Levant necessarily central — and points east could have had unforeseen importance to early human migrations. As anthropologist Michael Petraglia, of the Max Planck Institute for the Science of Human History, puts it, “A new story is unfolding.”

These findings could shed light on big unanswered questions, such as why humans made these migrations, what past environmental conditions were like, and how H. sapiens interacted with other hominins. But the changing narrative also underscores how much of our knowledge comes from — and is limited by — where archaeologists and other researchers have worked. The geographic emphasis has long been influenced not by science but by access, funding, and tradition.

The first hint that the long-held story of human journeys out of Africa had missed something critical came from within the well-studied Levant region, in the Misliya Cave in Israel. In 2018, archaeologists revealed that they had found a human jawbone in this cave.

The bone — dated with three different methods in the course of a decadelong investigation — is between 177,000 and 194,000 years old, pushing back the timeline of when humans first lived here by at least 50,000 years. And older stone tools found in layers beneath the jaw suggest that humans could have been present in this area even longer.

It’s possible, then, that humans left Africa and journeyed into the Levant — and elsewhere — even earlier than the date of this jawbone. This line of thinking gained still more traction in July 2019, when a group of scholars published novel findings on a skull discovered in Greece in the 1970s. That fossil, the new work suggests, is human and more than 210,000 years old.

But in addition to this changing timeline, researchers are rethinking where humans traveled when they left Africa. The Al Wusta find is just one example.

Researchers have discovered that these H. sapiens teeth, found in China, are at least 85,000 years old. (Credit: S. Xing and X-J. Wu)

In 2015, researchers in China published their finding of 47 human teeth, dating between 85,000 and 120,000 years old, in a cave in Hunan province. Until this discovery, the oldest modern human fossils found in southern Asia were only about 45,000 years old.

These new findings “oblige [us] to rethink when and the way we dispersed,” says forensic anthropologist María Martinón-Torres, director of the National Research Center on Human Evolution in Burgos, Spain, and a member of the team that discovered and studied the teeth. She adds: “There may be more than one ‘out of Africa’ dispersal … humans, like any other animal, may have expanded as far as there was not any barrier, ecological or geographic, that prevented them from doing so.”

In 2018, researchers in India published on the discovery of a collection of advanced stone tools. They say this find indicates a hominin presence stretching back at least 170,000 years — millennia earlier than previous research suggested. And some evidence suggests early humans may have headed directly toward Asia by crossing from Africa over the Arabian Peninsula, altogether bypassing the Levant, where so much of the earliest evidence of humans outside Africa has come from.

Acombination of new discoveries, then, has shifted understandings of the timing, routes, and geographic range associated with H. sapiens’ dispersal out of Africa. But for archaeologists, the finds also flag a blind spot of sorts. As Martinón-Torres says, “These findings are also a big warning note regarding Asia.”

Indeed, there is growing awareness of the need to expand the geographic scope of paleontology and archaeology related to early human migrations and evolution. “For a long time,” Martinón-Torres adds, “Asia was considered like a dead end with a secondary role in the mainstream of human evolution.”

“There is a huge bias in archaeological fieldwork and where it’s occurring, and our theories on human evolution are built on these geographic biases,” says Petraglia, who with Zalmout and colleagues at the Saudi Commission for Tourism and National Heritage found the Al Wusta fingerbone. Several factors have contributed to this bias, explains archaeologist and writer Nadia Durrani, who co-authored Archaeology: A Brief Introduction with anthropologist Brian Fagan. Archaeology began more than a century ago “as a Western scientific discipline,” she says.

The first archaeologists, who were European and American, focused mainly on Mediterranean Europe and lands mentioned in the Bible, including modern-day Iran, Iraq, Egypt, Israel, and the West Bank. “People were interested in the Bible and classical issues,” including ancient Greece and Rome, Durrani says. As archaeologists made discoveries in those areas, the interest in those regions grew, and institutions sprouted up in those same places, which in turn fueled further research there.

The opposite is also true. It can be difficult to convince colleagues or prospective funders of a place’s potential when it has been little explored and lacks certain forms of infrastructure. Environmental and natural barriers can come into play. Petraglia points out that working in areas that haven’t been well-explored can require starting from the beginning with tasks like surveys and mapping, and there is often no previous work to draw on.

For that matter, political issues may help or hinder archaeologists. Durrani participated in fieldwork in Yemen in the 1990s, for example, and later led tours at archaeological sites there. This work came to a halt in 2008 due to political instability in the area. Violence and conflicts pose serious barriers for access, she says.

The new findings indicate that attitudes toward Asia are changing, with more and more attention turning to this region. The shift coincides with economic and political changes. In the past two decades, China has been inviting scholarship into previously unstudied regions. More recently, Saudi Arabia has been opening up certain sites for archaeology and tourism.

Over time, access and conditions will, scientists hope, further improve. In the interim, this research reveals that anatomically modern humans left Africa earlier than expected and traveled south, along the Arabian Peninsula, in addition to north.

However, some of these finds have drawn skepticism. Jeffrey Schwartz, professor emeritus at the University of Pittsburgh, cautions against drawing dramatic conclusions from the findings. “I think we are calling too many things H. sapiens,” he says.

By contrast, Mina Weinstein-Evron, an archaeologist at Haifa University who co-discovered the Misliya Cave jawbone suspects that the recent findings are H. sapiens but agrees that the story of anatomically modern human dispersal is still far from clear. “We know nothing. We have a dot of evidence here and a dot of evidence there,” she says. “And then we use these big words like ‘migration’ and ‘dispersal.’ We talk as if they bought a ticket. But they didn’t know where they were going. For them it was probably not even a movement, maybe it was 10 kilometers per generation.”

What’s more, some genetic findings hint that even if humans traveled out of Africa and into Asia earlier than previously thought, it’s possible these early human migrations were ultimately unsuccessful from an evolutionary perspective. According to conclusions from three different groups of scientists who published in Nature in 2016, the DNA of Eurasians diverged from that of Africans 60,000 to 80,000 years ago. In other words, all humans alive today are descendants of H. sapiens who migrated out of Africa within that window—as well as other hominins, such as Neanderthals.

Scholars are recognizing that H. sapiens may have taken many different routes out of Africa, shown here in red. (Credit: Catherine Gilman/SAPIENS)

Nonetheless, the earlier migrations are intriguing, says Luca Pagani, a biological anthropologist who authored one of the Nature articles. “Although it’s not going to change our idea of which migrations were a success, it does show a richer variety of attempts at dispersal,” he says, and that is an essential part of the story of early modern humans.

Indeed, the reasons certain early human migrations failed could illuminate major questions in archaeology. Martinón-Torres and her colleagues working in China, for example, have posited that early modern humans may have been in competition with Neanderthals or other hominins, which could have influenced their movements.

Petraglia, meanwhile, suspects early modern humans may have thrived in the Arabian site until water disappeared as the desert expanded. “If you want to know how climate change may affect us one day, well, we’ve got a whole story here about the effects of climate change on human populations,” he says. In short, the descendants of these intrepid humans may not have survived, but their stories could still guide us into the future.

Sara Toth Stub is a journalist living in Jerusalem. This story was originally posted on SAPIENS. Read the original article here.