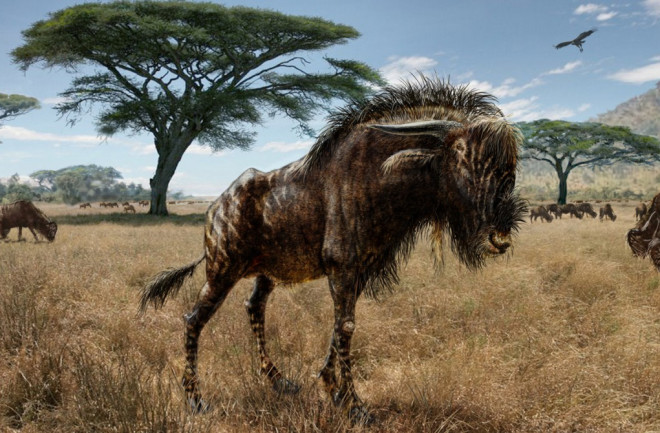 An artist's interpretation of Rusingoryx atopocranion. (Credit: Todd S. Marshall) It seems unlikely that a shaggy-maned antelope from the Ice Age would have much in common with a group of dinosaurs that roamed during the Cretaceous period 145 to 66 million years ago. But, then again, science is perpetually full of surprises. Rusingoryx atopocranion, an extinct species related to the modern wildebeest, shares a bizarre adaptation with a group of hadrosaurs: a hollow, domed ridge of bone along the front of its face called a nasal crest. Paleontologists say that a Pleistocene antelope with a bony nasal crest like that of some hadrosaur species is a surprising example of what's called convergent evolution.

The bones that make up the front of Rusingoryx’s face – its nasal bones, premaxillae (the pair of small bones at the end of the upper jaw) and frontal bones – are all elongated and tilted upward to form a closed ridge or bulge, which Ohio University, Athens, paleontologist Haley O’Brien and her colleagues call a nasal dome. Rusingoryx is the only mammal with a bony nasal dome, but hadrosaurs, of the lambeosaurine subfamily, have hollow crests constructed almost exactly the same way.

It’s a surprising case of convergent evolution, which occurs when two distantly related species happen to evolve similar adaptations within a similar environment. It turns out that Rusingoryx and hadrosaurs actually had quite a lot in common, despite being distantly related. Two continents and 65 million years apart, Rusingoryx and hadrosaurs enjoyed very similar lifestyles: both grazed in herds on wide, grassy plains. O’Brien and her colleagues described them as “gregarious plant-eating mammals and dinosaurs.” In an environment like that, with animals spread out across large areas, those who could call out to potential mates from a distance would have a serious advantage, and that’s exactly what nasal domes allow.

Most of Rusingoryx’s nasal passage ran through the dome, just above a very large set of sinuses, before it looped down from the top of the dome to enter the pharynx. Those enlarged sinuses would have made a perfect resonating chamber for amplifying very low-pitched sounds. The pitch was so low that the humans who hunted Rusingoryx during the late Pleistocene — 1.8 million to 11,700 years ago — probably couldn’t even hear their calls. The lower limit of human hearing is a frequency of about 20 Hz. Rusingoryx’s bony nasal dome could have produced calls from 248 Hz to 746 Hz, but since researchers don't have any information about the soft-tissue parts of its vocal tract, such as the pharynx, larynx, and trachea, they say that's a conservatively high estimate, and Rusingoryx's vocalizations could have been in the range of infrasound, well below the limits of human hearing. In the dry air of Kenya’s arid plains, such low-frequency sounds could travel over 6 miles. That would give an animal like Rusingoryx a real advantage in communicating with potential mates or warning competitors. Based on acoustic modelling, paleontologists think that lambeosaurines’ nasal domes amplified sound in about that same range of frequencies, which makes sense, because lambeosaurines grazed upon very similar landscapes in North America and Eurasia. O’Brien and her colleagues think low-pitched vocalizations enabled both the lambeosaurines and Rusingoryx to call out to each other at a distance without catching the attention of predators, although they aren’t yet certain. “What we know about infrasound is actually quite limited, from animals that are capable of producing infrasound to those that are capable of hearing it,” says O’Brien. “One predator that we do know can’t hear infrasound is humans, and it is quite possible that other predators aren’t capable of hearing low frequencies,”

When the first Rusingoryx skulls were discovered in 1983 on Rusinga Island in Kenya’s Lake Victoria, most of the animal’s facial bones were missing. At the time, paleontologists could see that its nasal bones were be angled slightly upward, leading them to surmise that they might be part of a structure resembling a nasal dome. The idea, however, was ultimately dismissed due to lack of evidence – until O’Brien and her colleagues found six complete Rusingoryx skulls at a Rusinga Island site called Bovid Hill, with intact nasal domes. The paleontologists performed CT scans and acoustic modelling on the skulls to better understand how the nasal dome was formed and what purpose it served. They published their work in the journal Current Biology.

Researchers want to know more about how the crest evolved, although they have a basic idea. In earlier relatives of Rusingoryx, called Megalotragus, paleontologists say the nasal passage gradually shifted upward, and then the facial bones began to lift and elongate to form the dome. “Specialized cheek teeth may have set the process in motion; this is something we’re hoping to look into further. The molars in the cheek (upper jaw) and lower jaw are proportionally very tall in Rusingoryx. This may have instigated some of the changes that we see in the cheek (maxillary) region,” says O’Brien. Lambeosaurines followed a very similar evolutionary path to form nasal domes. In two unrelated species, it may seem surprising that the process and the result could be so similar, but O’Brien and her colleagues say that only a few sequences of evolutionary changes could have led to nasal domes. Making all those changes happen would have required a very similar set of circumstances, such as life in large grazing herds on open grasslands under constant threat from deadly predators. In other words, Cretaceous hadrosaurs and Pleistocene antelope had to have a lot in common after all.