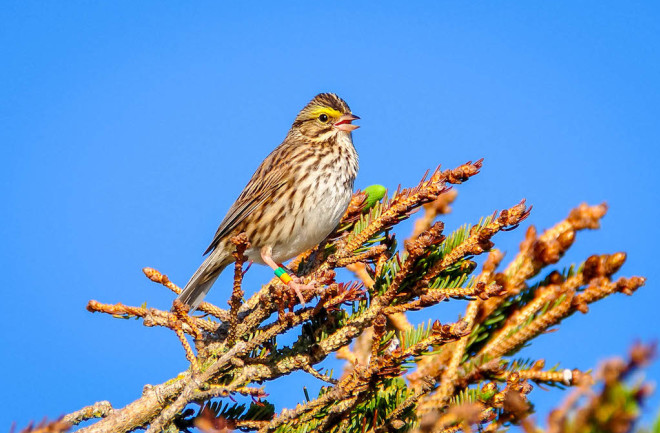 A Savannah Sparrow at Bowdoin Scientific Station on Kent Island, New Brunswick Canada, subject of a playback experiment that revealed wild birds learn to sing based on sounds they hear in the first year of their life. (Credit: Dan Mennill) Researchers have taught a population of wild sparrows to sing a different song. Out today in Current Biology, the research suggests new answers to the question of how birds learn to sing. “This was a risky experiment we conducted because we didn’t know if it was going to work,” says Dan Mennill, lead author of the study. Mennill explains that song learning has been studied for years in controlled laboratory settings. But it’s much more difficult to run an experiment in the wild since there are so many complex factors at play. The team, led by Mennill at the University of Windsor, was interested in learning about how – and when – birds learn to sing their songs. They had an idea for some tests, but whether they would work hinged on whether the team could teach wild birds a foreign song.

The researchers have been studying the savannah sparrows living on a remote island off the coast of New Brunswick in eastern Canada for decades. As Mennill says, “we know every kind of sound that has been ever uttered on that island by a savanna sparrow.” Savannah sparrows live across North America and have regional dialects just like their human neighbors. So songs from West Coast populations living 3,000 miles away are still distinctively savannah sparrow, but are easy enough for researchers to tell apart. The researchers hoped they could teach the East Coast birds to sing West Coast songs. But they needed tutors. So they programmed weatherproof, solar-powered speakers to wake with the sun, sing at random intervals throughout the day and sleep at night. When they first deployed the speakers, they didn’t know if any birds would pick up their songs. But they did. “This was maybe one of the key highlights of my scientific career,” says Mennill. “The moment when a bird arrived from migration and opened its beak to sing, and it had learned our experimentally introduced song. Not a local song.” “I still remember that bird. His band combination was light blue, black, light blue,” he says, referring to the color-coded anklet system researchers use to identify individual birds in the wild.

Their success with the speaker-tutors opened up a world of possibilities for song learning experiments. It had long been assumed that young birds learned their songs by listening to adults, but the evidence from laboratory studies hadn’t been confirmed in the wild. By slightly varying the songs they broadcast each year, and keeping track of the individual birds born each year, the team confirmed that young birds do, in fact, learn the songs sung by adults (or speakers) in the neighborhood they’re born in. But, they learned, that’s not the only time young birds need to hear a song for it to really stick. To learn a song, birds need to hear it both right after they hatch and then again when they arrive back at their home turf for their first breeding season. Why? Mennill has some ideas. “First, just like humans, they need to be exposed when they’re young in order to lay down the neural basis of sound,” he says. “Just like a young human is very good at learning languages early in life but is not so good later in life.” Then, “what it’s hearing when it first returns from its first northward migration is the sounds that will define the acoustic landscape where a young male will defend his territory and attract a mate,” says Mennill. “So if you’ve grown up learning French and English, and then you settle in to an area where only French is spoken, French is the language you’ve got to be able to speak in order to capably secure resources and attract a partner.”

Only one-third of the birds born on the island learned the researcher’s songs. The other two-thirds learned the local songs, which were still being sung by resident adult birds throughout the study. What determines which song a bird picks up? It’s not clear. The researchers kept track of the frequency of song playback and the proximity of speakers to nests. But neither of these affected which song a bird learned. Now, the researchers have turned off their speakers, and are eagerly listening to find out what will happen in this novel bird population that’s singing two different songs. They’ve already witnessed a new generation of birds picking up the experimental song – not from the loudspeakers, but from the older birds on the island. “We’re going to set up now and allow the birds to do their thing,” says Mennill. “It’s going to be fascinating.”