Wild Chimps Look Both Ways Before Crossing the Street 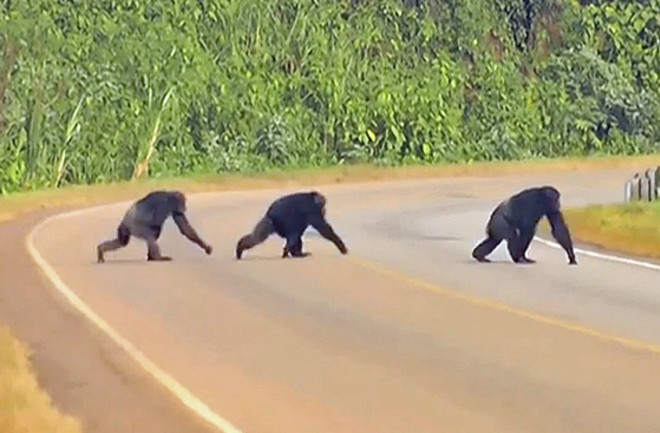 Chimps crossing a busy highway in Uganda. (YouTube screengrab) “Look both ways before you cross the street!” It’s one of the first, and most important, lessons we learn as children. But humans aren’t the only creatures that heed this crucial bit of advice. Scientists conducting a 29-month survey in Uganda’s Kibale National Park found that chimpanzees checked for oncoming traffic before crossing the dusty, busy highways that run through the park. Of the 122 chimps that were caught on camera crossing the road, 92 percent of them looked left, right or both ways before crossing. Scientists hope observations like these will both deepen our understanding of how animals adapt to human development and encourage engineers to design wildlife-friendly roads.

Encountering an asphalt highway is a serious matter of life and death for a troop of chimpanzees on the move. Roughly 90 vehicles per hour, traveling at speeds reaching 60 miles per hour, use the particular stretch of highway where scientists set up their camera. Individuals from six different primate species lost their lives here in about a year. Chimps, it appears, take these risks into account before deciding to cross. In 83 percent of the crossings scientists observed, alpha males took control to organize and lead road-crossing groups when they approached the dangerous highway. By comparison, such males took the lead just 50 percent of the time when descending or climbing nearby feeding trees. In other words, when it comes to the perilous task of crossing a road, chimps want their best leaders in charge. And when it comes to finally crossing, it’s truly a team effort. A troop will break up into smaller subgroups and cross together, with vulnerable individuals — females, juveniles or the injured — crossing less frequently. When the crossing groups were larger, chimps picked up the pace and crossed more quickly to get everyone across. After successfully crossing, about 20 percent of the chimps even looked back to check on the rest of the group and wait for them to reach safety. Researchers published their findings earlier this month in the Journal of Primatology.

It seems the more we fix our cameras on chimps, the more we realize how human-like their behaviors are. Recently, female chimps were observed shaping branches into spears

and even enjoy doing puzzles

for fun. Scientists want to continue monitoring roadways to see how they affect chimps’ territory and species dispersal. More information will help engineers decide where additional signage, reduced speed limits or increased police patrols would help mitigate the number of chimp — and other wildlife — fatalities in Africa, where road-building is surging. And who knows, maybe someday chimps will get their own "Walk" button to press before crossing the street. From the looks of it they could surely figure it out.