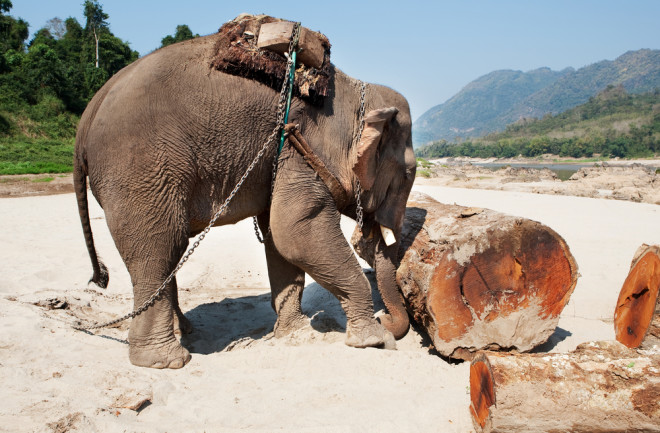 Asian elephants are commonly used in the timber industry. (Credit: Muellek Josef/shutterstock) New research into captive elephant lifespans reveals that wild-caught animals live shorter lives. Elephants are critical to the logging industry across Southeast Asia, even though the animals are endangered. And in Myanmar, a country long largely cutoff from the world, the animals are an especially integral part of the workforce. For centuries, Myanmar kings employed the beasts in their armies. And since the early 1700s, the country’s government has used the giants as draft animals to harvest timber, like teak, a popular hardwood that grows in mountainous regions where vehicle access is difficult. But to tame and train the animals, people first had to capture them. Capturing elephants typically happens in one of three ways: lassoing individuals around the neck; immobilizing them with an opiate-derived narcotic before administering a reversal agent and tethering them to another elephant that leads them to camp; and herding whole groups, usually families, into stockades. Previous research showed capture is traumatic for the animals and can significantly affect their health and behavior. The breaking and taming process likely enhances these negative effects. Mirkka Lahdenperä, a biologist at the University of Turku in Finland who led the new research, wanted to compare different capture methods. Since elephants are highly intelligent and social animals that live in strong family groups, she thought the herding method might mean less social isolation for the creatures.

To find out how being captured affects elephants, Lahdenperä tapped a unique dataset: full life histories of thousands of Asian elephants stretching back more than a century. Khyne Mar, Lahdenperä’s colleague at the University of Turku and co-author of the new paper, collected the data from the Myanmar Timber Enterprise, which archives the life details of each work animal with the aid of local vets and regional timber managers. The records track the elephants from birth to death and include not just whether an elephant was born in the wild or in captivity but how they were captured, how old they were when tamed, and who their parents and offspring are. Although earlier studies assessed how captivity affected elephants shortly after capture, the long-term effects on elephants’ lives were unknown. So, Lahdenperä and her team analyzed nearly 50 years of the timber company’s records that chronicled more than 5,000 elephants’ lives. The team’s analysis revealed that capturing elephants from the wild reduces their lifespan by around 5 years, regardless of how they were captured or their gender. “This means all these [capture] methods had an equally negative effect on the elephant’s subsequent life [in the long-term],” Lahdenperä said in a statement. Death during capture and taming killed 5 to 30 percent of the animals, but since the researchers did not have access to this data, Lahdenperä says they can’t determine which capture method might be best (or worst) for elephants.

Wild elephant populations are declining, thanks in part to conflict with humans, but also to sustain captive populations like those in zoos. One-third of Asian elephants now live in captivity. And even in elephant research and conservation programs, the effects of capture on the subsequent health of the animals are not taken into consideration, says Lahdenperä. She hopes this unique dataset can help provide new solutions to elephant management and healthcare, adding that “capturing elephants isn’t only detrimental because it reduces wild populations of this endangered species, it also fails to provide a viable solution for sustaining captive populations.” The scientists detailed their findings August 7 in the journal Nature Communications.