Why Your Dog Likes Sticking Its Head Out the Car Window 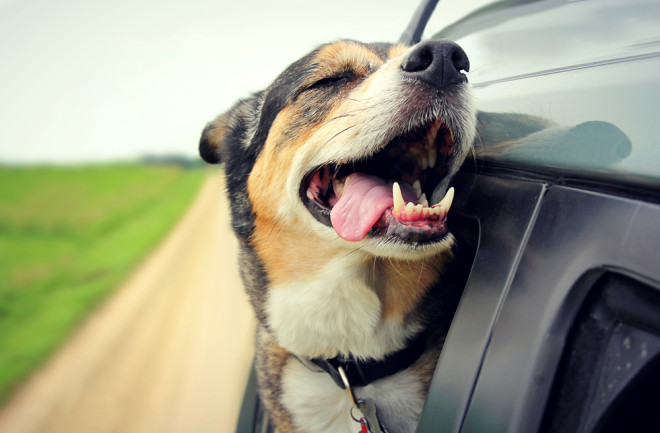 What’s so great about hanging your head out of a car window? (Credit: Shutterstock)

If happiness were a picture, there’s a pretty good chance it would be a dog with its head sticking out of a car window.

It seems few pups can resist a breeze running through their fur and their ears flapping in the wind as their owner cruises into the sunset. And based on those wind-whipped grins, dogs seem to wholeheartedly enjoy this simple pleasure.

But you have to admit, seeing a dog zoom by while catching the breeze is a pretty odd spectacle. Most of us have probably wondered why dogs stick their heads out of car windows. Is it the fresh air, or is there something more to it?

Most dogs have a weird quirk or two that (usually) makes them all the more lovable. But unlike other common canine behaviors — such as butt sniffing, tail chasing and kicking a leg during an epic belly rub — their car etiquette is less understood.

Riding in Cars With Dogs

Sticking heads out of windows, understandably, hasn’t gotten much attention in animal behavior research. But experts have a pretty good hunch as to why an open car window is your dog’s idea of a good time. And it’s not because Rover is glad to be getting out of the house for a bit.

“Dogs receive more olfactory stimulation with their heads fully outside the car versus inside the car. And even having the windows down only a few inches seems to provide enrichment and stimulation that dogs will seek out,” says Natalie Zielinski, director of behavior services at the Wisconsin Humane Society.

The canine olfactory system is highly developed and far superior to ours. For starters, a dog’s nose is equipped with a complex maze of 300 million scent receptors, compared to our measly 5 million. The more receptors, the more sensitive the nose is.

And dog noses aren’t just cute — they’re practically designed to savor smells. Dogs have two air passages, one for breathing and one dedicated to smelling. To top things off, the canine olfactory cortex, the part of the brain responsible for processing smells, is 40 times larger than that of a human.

The result is that a dog’s sense of smell is far more powerful than ours. And a rolled-down car window opens up a world of near-infinite olfactory novelties for dogs.

“When sticking their head out the window, they can smell every person in the street, every trash can they go by, every patch of grass, restaurant and other dogs. It’s like watching TV for us,” says Jennifer Cattet, an animal behavior researcher and owner of Medical Mutts, a service dog training center in Indianapolis.

Although odors are probably the main attraction here, we shouldn’t underestimate dogs’ other senses. Contrary to popular belief, Cattet says sight is a dog’s primary source of information. An open window is much more interesting than laying in the back seat.

Zielinski likens an open car window to a sensory trifecta for dogs. In addition to constantly changing sights and smells, dogs also get tactile stimulation from the air blowing on their faces, which probably feels good.

But we shouldn’t paint all dogs with a broad brush. Cattet says motivations for leaning out the window may depend on the individual dog. And for some, the reasons could go beyond stimulating the senses.

While many dogs love excitement and adventure, others are creatures of habit. Looking out the window may help some dogs gain a sense of control over their environment by allowing them to see where they are. They could be trying to anticipate what’s next, or trying to figure out if they’re going to the dog park or the vet.

And even though your dog is probably happy to be sitting next to its favorite human, an open window may represent access to freedom, Cattet says.

“When dogs are confined in any capacity, they tend to look for an opening,” she says.

No matter the reason, unless you have an unconfident pup on your hands, most dogs can’t resist a cracked window. The same might go for other animals too, in fact. Dogs simply happen to be the creatures we travel around with the most. After all, who can resist the wind in their face?

“I’m sure other animals would do the same if they were in a car, but we generally don’t travel with goats, sheep or cats loose in the car,” Cattet says. “I have seen horses stick their head out, but I have no way to tell if most [animals] would if they had a chance.”