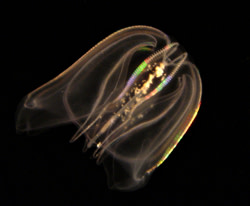 In my last post I wrote about how scientists are learning about the origin of animals by studying their genomes. One of the surprising findings of the latest research is that a group of animals called comb jellies (ctenophores) belong to the oldest lineage of living animals. Comb jellies look a bit like jellyfish--soft, tentacled creatures without brains or eyes but with a nervous system. As I wrote in the Boston Globe Monday, earlier studies had generally pointed to sponges as belonging to the oldest lineage. If comb jellies take their place, that may mean that the ancestors of sponges lost their nerve(s) and became anchored filter-feeders. David Marjanovic then left this comment:

IMHO the tree is full of long-branch attraction. The position of the ctenophores is probably spurious.

So what's David talking about? Long-branch attraction refers to a pesky problem that evolutionary biologists face when trying to reconstruct ancient episodes in the history of life. In my article I only referred briefly to these sorts of challenges, but fortunately blogs give me a little room to stretch out. Long-branch attraction is a new twist on a classic phenenomon in evolution called convergence. This happens when two lineages evolve into very similar forms. Legless lizards and snakes, for example, independently evolved a serpent body shape. The octopus eye forms images like a camera, just as ours do. Several strains of E. coli have evolved into disease-causing bacteria that invade intestinal cells. On the surface, two convergent species may look as if they share a close common ancestry. It can take some close scrutiny to discover that they are not. A segment of DNA can also evolve convergenty in two lineages. Imagine that a particular segment of DNA in the ancestors of insects had a sequence, AAATAAA. Imagine that vertebrates had a sequence AATTGAA. It takes only one mutation in each lineage for them to both evolve into AAATGAA. Now they have an identical segment that they did not inherit through common ancestry. This sort of convergence is unlikely to happen soon after two lineages split apart. But as more time passes--as branches get longer--it becomes more likely. Branches that are not in fact closely related get attracted to each other when scientists study their DNA. Hence, long-branch attraction. In the case of this new study, David is suggesting that sponges ended up looking more closely related to us than comb jellies because the DNA the scientists studied happened to evolve convergently. I dropped a note to Casey Dunn, the lead author of the new study in Nature, and he fired back some enlightening comments...

Long branch attraction is one of the most common types of systematic error encountered in phylogenetic inference...It is the primary reason we say in the paper that the ctenophore result "should be viewed as provisional". Unfortunately, the Nature format is very restrictive in its length so we did not have room to explicitly discuss this issue, though we were very mindful of it and much of the experimental design was structured specifically to address it.

That design included finding lots of weird animals. Adding branches to an evolutionary tree essentially chops down long branches to shorter lengths, because the new species are more closely related to some of the animals than to others. That's why one of Dunn's colleagues fished up a second species of comb jelly when the startling results first emerged. The long branch of the original comb jelly now became split in two, reducing the amount of long-branch attraction. Another possibility might be that the ancestors of comb jellies have evolved faster than other animals. Their rapid evolution would give rise to more differences between their DNA and the DNA of other animals. As a result, the more slowly-evolving animals, including sponges and us, would appear more similar. But when they measured the rate of change on each branch, the comb jellies didn't appear at all peculiar. By taking these extra steps (and others), Dunn and his colleagues felt confident enough to go into print with their results. Fortunately, scientists can continue to test for the possibility of long-branch attraction by adding more species to the tree. Animals that belong to deep lineages are the best. The bizarre, balloon-bodied Trichoplax would be a good place to start, since its genome is already sequenced. Science, thankfully, marches on.