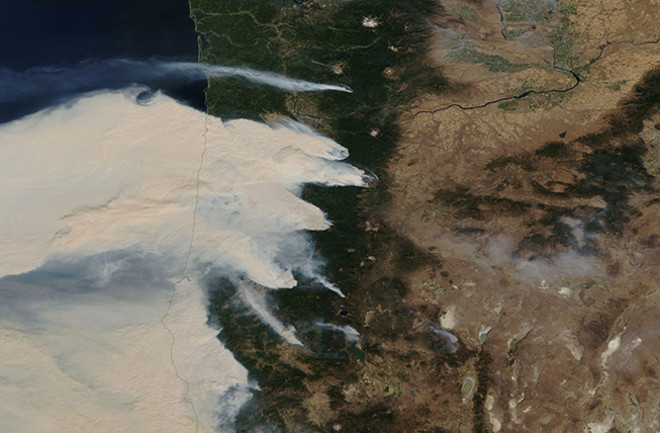 Terra/MODIS image of the wildfires across California, Oregon and Washington on September 10, 2020. Credit: NASA.

The western United States is on fire. Large swaths of Oregon, California and Washington have massive wildfires burning over millions of across. The immediate threat to people is the fire itself — we need people to evacuate when the order is given so they can stay out of harm's way.

However, the larger hazard might be the wildfire smoke and ash being generated from all this burning (see above). This is a trait that wildfires share with volcanic eruptions because it is the widespread volcanic ash that can cause the most harm. However, wildfire ash and volcanic ash are very different beasts.

Let's talk about how they're the same. They both drift in the winds and are driven upward by thermal gradients — hot material billowing upward. That might be where the similarities end.

So, how are they different? Wildfire ash is made from burning organic material — stuff like trees. As they burn, they can produce three different materials that will drift in the air: char, soot and ash. The first — char — is organic material that didn't burn all the way. The second — soot — is fine carbon particles from the burning process. The last — ash — is the light colored fine powder left from burning. All three of these materials are carbon rich and ash is also rich in calcium.

An image of wildfire ash under a scanning electron microscope. Credit: EPA.

Just like pretty much anything else, you don't want wildfire ash and smoke in your lungs. If this material gets deep in your lungs, you can definitely experience permanent lung damage or even die from smoke inhalation. This is doubly so for children and people with pre-existing conditions like asthma.

All this organic material in the air leads to poor air quality many hundreds of miles from the fires. Anyone who has lived in an area with wildfires knows how eerie it can be when the smoke and ash spread over the area. The sky darkens, the air smells of burning wood and your eyes start watering. Even after the fire, people need to wear masks and gloves when they clean up during and after the fire thanks to all this wildfire ash.

Volcanic ash can lead to much of the same hazards: breathing troubles, eye irritation, contamination of water and food. Yet, it is for entirely different reasons.

Unlike wildfire ash, volcanic ash is not caused by burning (so be a cool kid and never say a volcano is producing "smoke"). Volcanic ash is made of tiny fragments of rock and volcanic glass. It's generated during an explosive eruption where rock can be pulverized or magma can be shattered. The heat from the eruption helps send the ash skyward with volcanic gases like water vapor, carbon dioxide and sulfur dioxide.

Volcanic ash can drift in the wind as much as wildfire ash — sometimes even farther because volcanic ash can be injected into the atmosphere up to at least 150,000 feet (45 kilometers). This means that ash can spread easily in the stratosphere. Wildfire smoke and ash plumes reach up to 50,000 feet (15 kilometers), but most are much lower.

Thanks to the fact that volcanic ash is made of silica, one of the most dangerous aspects of breathing in volcanic ash is silicosis. This happens when all those glass shards from the ash cut your lung tissue, leaving it scarred. Deep inhalation can leave permanent damage. You can inhale enough ash to lead to asphyxiation as well, both brought on by the ash in the lungs and fluids that accumulate as your lungs are cut.

A scanning electron microscope image of ash from the 2020 eruption of Taal in the Philippines. Credit: Erik Klemetti / Denison University.

Yet, unlike wildfire ash, volcanic ash is actually quite dense. Pile up a few inches of volcanic ash on a roof and it is the equivalent of many feet of snow. So, deaths from roof collapse near volcanic eruptions can be attributed ash.

In some places where very large volcanic eruptions have happened, like the area around the Valley of 10,000 Smokes in Alaska, volcanic ash can remain a hazard for over a century. The wind can blow ash deposits, creating renewed hazard. That betrays another difference between volcanic and wildfire ash: Volcanic ash can accumulate many feet thick, especially near the volcano. Wildfire ash tends to be a thin veneer that gets incorporated back into the soil quickly because it is organic material. Volcanic ash can persist for decades, thanks to its rocky nature.

Although they share the same terminology, volcanic ash and wildfire ash aren't the same. They might lead you to the same fate thanks to their damaging effects on your lungs. They both betray the destructive nature of their sources, but as the Earth's climate continues to change, we may have to get more used to wildfire ash across the globe.