Why Viruses may be a Genome Editor's Secret Weapon 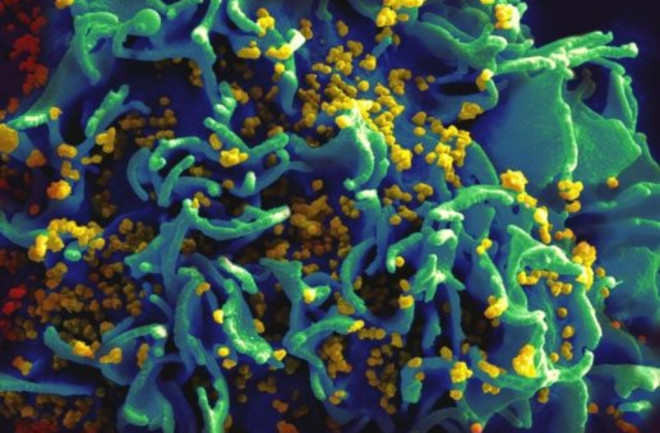 A scanning electron micrograph of HIV particles (orange) on a human T cell. (Image: NIAID/NIH) Viruses have a bad reputation. Smallpox, bird flu, Dengue fever, Ebola - some of the most frightening health threats come from the diminutive pseudo-lifeforms, which are often just a few dozen nanometers across. Viruses deposit genetic material into unsuspecting host cells, which ultimately process the new instructions through transcription and translation, running off copies of the invader like an over-caffeinated Xerox. When the virus is ready to make its move, a couple of hundred viral particles assemble, bursting out of the doomed host to spread far and wide. This sequence of events is primarily a negative experience for those of us who aren’t viruses, but their ability to re-package DNA and deliver it to an unsuspecting organism isn’t always a bad thing. In fact, a community of virus apologists has arisen over the last several years, exposing the benefits of viral activity. For example, viruses appear to serve as important regulators in marine environments, cutting harmful algal blooms down to size, or enabling a wider array of lifestyles by supplying fresh food supply to environments like the deep sea. When viruses don’t go nuclear and instead incorporate their genetic payload into the host’s chromosome (the “lysogenic” phase), novel functions can be passed among organisms. And now, the idea of capitalizing on viruses’ ability to inject host cells with foreign material - turning a bug into a feature - has gained additional attention as gene editing experiments have proliferated. In order to effectively chop up native genes, and potentially insert new versions, you’ve first got to smuggle the molecular tools (proteins) and/or their blueprints (DNA) into the cell. Traditionally, this has been done by disrupting the cell membrane - by heat, chemicals, or electrical fields - just enough to shuttle the cargo across. But things don’t always come back together, and high mortality rates make such methods impractical when maintaining the integrity of the living environment (e.g., the human body, in medical applications) is a priority. Viruses are a more nuanced scalpel - they have an evolutionarily vetted mode of entry and expression. To avoid the unsavory bursting cell scenario, “replication-deficient” viruses have been engineered. Given these strategic advantages, and spurred on by the enhanced editing capabilities enabled by CRISPR-based nucleases, Xiaoyu Chen and Manuel Goncalves at Leiden University Medical Center recently published a review of viral vectors as gene editing tools in Molecular Therapy. They highlight three types of viruses that can do the trick, each with its own strengths and weaknesses. Lentiviruses have the unique ability to infect non-dividing cells, an important consideration for hosts that aren’t actively growing. Most engineered lentivirus vectors are based on HIV-1 - whose wild type variant is responsible for the global AIDS pandemic - because they can stably insert imported genes into the host’s genome. But that’s not necessarily a good thing for a CRISPR-mediated gene replacement, where a separate DNA strand (one not integrated into the genome) can be used to bridge the CRISPR-Cas-damaged site. With this consideration in mind, an engineered “integrase-deficient” lentivirus that ditches the DNA insertion step is many gene editors’ vector of choice. Adeno-associated and adenoviral vectors are the other promising options; the former is a minuscule 20 nm across, while the latter can pack particularly large cargos. All three types of viruses can be developed to spec, loaded with a researcher’s specific gene or protein sequences, within a few weeks. Viral delivery of gene editing proteins is actively being investigated for clinical use. After all, nuclease-modified cells are already showing promising results: in one clinical study, immune cells modified in a lab by removing the CCR5 gene (a critical receptor for HIV) were infused into HIV-positive patients. The edited cells outlasted the native cells. If this modification could be made in the body, an effective gene therapy could be within reach. The type of protein employed to do such genetic editing will no doubt be hotly contested in the coming years, but the way to get it to susceptible cells may be sorted. By co-opting viruses, we can turn a feared enemy into a valuable ally.

Help us do science! I’ve teamed up with researcher Paige Brown Jarreau to create a survey of Extremo Files readers. By participating, you’ll be providing me valuable feedback AND contributing to real live science on blog readership. You will also get FREE science art from Paige's Photography for participating, as well as a chance to win a $50 Amazon gift card (100 available) and other perks. It should only take 10-15 minutes to complete. You can find the survey here: http://bit.ly/mysciblogreaders