Why Tainted Spinach And Antibiotics Are a Bad Match 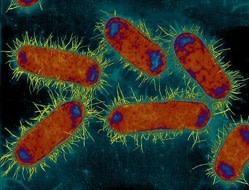 Over the weekend I wrote about the natural history of the Escherichia coli strain that has contaminated spinach. According to reports today, 109 people have been identified as sickened with Escherichia coli O157:H7, and one has died. In the comment thread of my post, the subject of antibiotics came up. It turns out that antibiotics are the last thing you want to take if you get sick with Escherichia coli O157:H7. It may turn a nasty--but temporary--case of bloody diarrhea into fatal organ failure. More below the fold... Like other microbes, Escherichia coli O157:H7 carries a number genes that were delivered to it by viruses. In some cases, the viral DNA has mutated to the point that it cannot produce new viruses, and so the genes can only be passed down from one generation to the next. In other cases, the viruses are dormant but still independent. In response to stress, Escherichia coli starts making new copies of the virus, which then burst out of their host. Antibiotics are among the stresses that trigger the viruses to escape. It's a good strategy for the virus, because it can escape from its host before the antibiotics kill the bug. It's not so good for the host, of course, and can be pretty bad for us as well. That's because the toxins in Escherichia coli that can cause organ failure are actually carried by the viruses. The genes only become active as the host begins making new viruses. That means that if you take antibiotics for infection with Escherichia coli O157:H7, you may wipe out the infection, but you may also trigger organ failure. As a result, the advice from experts on this bug is to just rig patients up with hydration and hope for the best. While a few people may suffer organ failure even without antibiotics, in most cases the bloody diarrhea passes, and people recover. Let sleeping viruses lie.