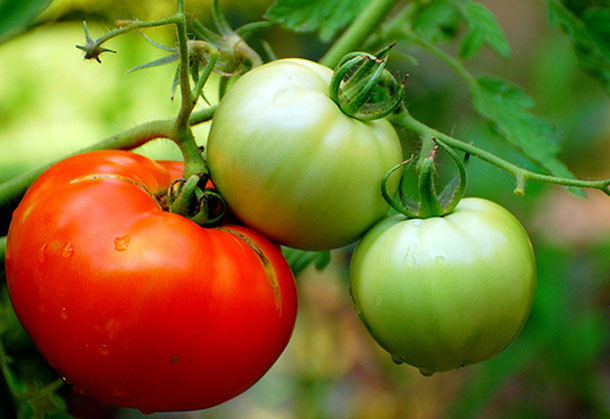 If you’ve ever bitten into a wild tomato, you’ll have enjoyed a sweet, intense explosion of flavour. The tomatoes that line most supermarket shelves are a world apart. They look great – a wall of even, ripe red – but they taste like cardboard. These two facts are related. Ann Powell from the University of California, Davis has found that farmers have inadvertently ruined the taste of tomatoes by selecting for ones that ripen together and look good. That aesthetic appeal has been driven by a single change in a single gene, which also affects how the fruits taste. Before they ripen, wild tomatoes are dark green near their stems, and lighter at the bottom. For the past 70 years, tomato breeders have preferred fruits that start off being uniformly light green. They ripen more evenly, which makes them more visually pleasing to consumers, and it’s easier to tell when they’re mature. This trait is governed by a cluster of genes called the “uniform ripening locus” or simply “u”. Powell showed that this region includes at least eight genes, including one called SIGLK2 that affects the tomato’s colour. SIGLK2 controls the activity of hundreds of other genes. Around half of these are involved in the production of chloroplasts, the small structures in plant cells that allow them to harvest energy from the sun and produce their own food. They are the engines of photosynthesis. They also give plant tissues their colour because they contain the green pigment chlorophyll. So, wherever SIGLK2 is active, tomatoes are a dark, intense green. In the wild fruits (denoted by a capital U), SIGLK2 is eight times more active near the stem than the bottom, while is why the top half is a darker shade of green. In the evenly coloured fruits (denoted by a small u), SIGLK2 has picked up a single mutation – a difference in one DNA letter. This tiny change means that the gene encodes a stunted, broken protein. As a result, it doesn’t produce chloroplasts properly, it doesn’t increase levels of chlorophyll, and it doesn’t make the tomatoes any greener. This is why the u-fruits that are favoured by tomato breeders are light green, and evenly so. But these changes also affect how the tomatoes taste. During photosynthesis, they convert carbon dioxide and water into sugar and oxygen. If you downplay the number of chloroplasts, you reduce the levels of photosynthesis, and you get a plant with less sugar in its tissues. And that’s why supermarket tomatoes aren’t going to hit your palate with the same sweet punch that their wild counterparts pack. There’s a silver lining to all of this. If Powell stuck a working copy of SIGLK2 from a different plant into a u-tomato, she increased its sugar levels by around 40 per cent. She also boosted its levels of lycopene, the red pigment that affects the colour of ripe tomatoes. Perhaps by manipulating this gene, we can produce a tomato that is still easy to farm at a large scale, while restoring the wonderful tastes of ancestral varieties. Reference: Powell, Nguyen, Hill, Cheng, Figueroa-Balderas, Aktas, Ashrafi, Pons, Fernandez-Munoz, Vicente, Lopez-Baltazer, Barry, Liu, Chetelat, Granell, Van Deynze, Giovannoni & Bennett. 2012. Uniform ripening Encodes a Golden 2-like Transcription Factor Regulating Tomato Fruit Chloroplast Development. Science http://dx.doi.org/10.1126/science.1222218Image by Manjith Kainickara