Why Scientists Taught A Spider to Jump on Command 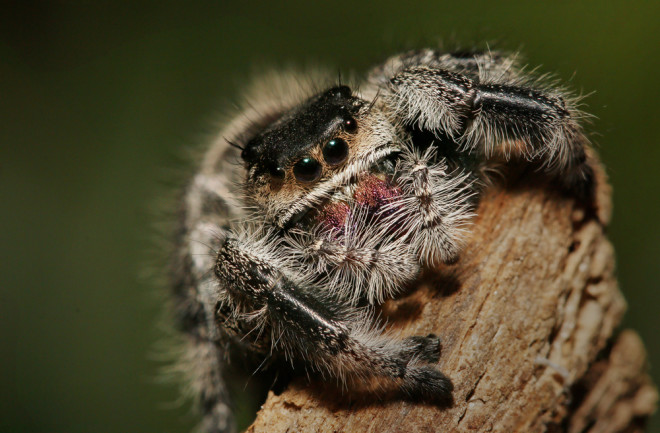 A Regal Jumping Spider. (Credit: Jiri Prochazka/Shutterstock) Spiders may give you the creeps, but they’re pretty cool critters. They create silk that scientists are still learning from, and use them to spin webs that are natural works of symmetric art. And, uh, some spiders can jump. That might not seem as cool — and certainly doesn’t help on the creepiness front — but as a team of UK scientists has shown, we could learn a lot from the leaps a spider makes, too.

How to Train Your Spider

But before they could learn a spider’s secrets, the team had to train their spiders to jump on command. Easier said than done, apparently. In a paper published today in Nature Scientific Reports, they write, “However, it proved difficult to induce the spiders to jump in the test chamber and ultimately only one individual (female, body mass 150 mg, L = 15 mm) showed any inclination to jump as required, hence all experimental data is based on this individual.” You might think it was easy — just set up the spider’s favorite snack on the landing platform and watch her go, right? Or maybe just annoy the spider on the take-off platform till it gets the message and jumps, maybe with a blast of air or something? Nope. The scientists didn’t want to use any stimulation to produce the jumps, and the thing only ate once a week, meaning a snack-based jumping system would take months to study. “Instead,” they write, “the spider was manually transported between the take-off and landing platforms until it became familiar with the challenge.”

The amenable spider, nicknamed Kim, was a member of the species Phidippus regius, the Regal Jumping Spider. As it made 15 different kinds of jumps, with a horizontal gap of 2-5 body lengths and a vertical one of +/- 2 body lengths, the scientists filmed it with high-def cameras and CT scans. As a result, they saw exactly how it plans each jump, and the different jumping “strategies.” “For long distance jumps the power limitations of the spider may force it to use the distance optimum trajectory,” they wrote. “For shorter jumps it can choose from a range of available take-off angles, and because these short jumps are typically used for prey capture, a rapid low trajectory may well be the best choice.” Basically, longer jumps are more energy efficient, and shorter jumps maximize speed. Makes sense, and now we know how it does it too. Some insects and spiders jump with a kind of internal spring-like mechanism, or via fluid pressure within the joints. But Kim, at least, used only her normal leg muscles in all her leaps. Which means soon, maybe our devices will too. As engineers mine nature’s designs to create better, faster, stronger robots and other machines, every new animal discovery means more potential new tech. “Less attention has been directed towards creating spider-inspired jumping robots,” the authors write, “which prioritise speed and accuracy over jumping distance.” Which means soon, if we’re lucky, our gadgets may give you the creeps, too!