Why Randy Peacocks Give a Hoot

Even when Indian blue peacocks have their mates in range, they'll make the reckless decision to call out. Why? 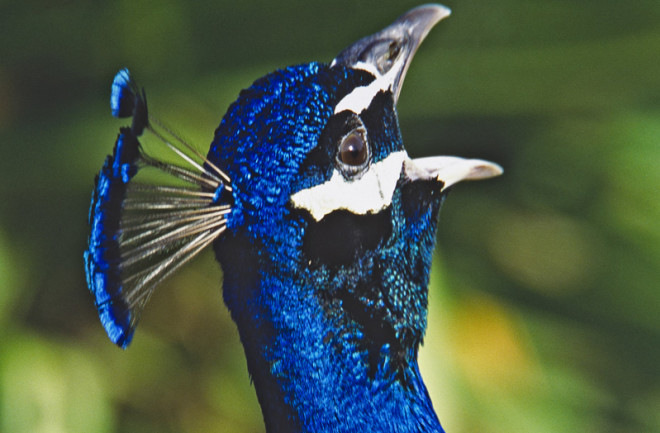 Even when Indian blue peacocks have their potential mates well in range, they make a point to hoot and announce their intentions.  | Richard Mittlemann

During a research trip to northwest India’s Keoladeo National Park in 2011, Jessica Yorzinski sat inside a hunting blind. Searing summer temperatures caused her camcorders to malfunction. Animals — probably jackals — growled and scratched at her shelter, while a speaker blared an odd hooting noise. She watched for peahens to approach.

They did, far more frequently on days when Yorzinski, then a postdoc biologist at Duke University, played a particular peacock mating call, called a hoot-dash, than when she played nothing. Male animals often use mating calls to attract females, but the hoot-dash is peculiar. Indian blue peacocks emit a single ecstatic hoot just before dashing less than a yard toward females to mount them. “Few species emit courtship calls directly before copulating,” says Yorzinski, now at Purdue University. Not only do the calls expend energy, they might also attract predators like jackals, tigers and leopards. During Yorzinski’s research trials, some predators approached, but none struck.

So why would peacocks be so reckless? Yorzinski’s observations showed that the hoot-dash attracted other females, increasing the male’s chances of mating again. Despite the peacock’s over-the-top tail and infamous strutting display, the birds need help finding each other in India’s dense forests and scrubland. Yorzinski believes peahens may also be able to decode a male’s hoot for useful information, like his size or dominance status. And frequent hooters may take advantage of a phenomenon called mate-choice copying, in which females prefer popular males.

But peahens should beware, Yorzinski says: “Peacocks occasionally produce the hoot when they’re not mating, giving the false impression that they’re with a female.” Future studies could explain why peacocks don’t fake it more often. Two possibilities: Females might reject them if they catch them bluffing, or other males might attack them if they appear to be greater rivals.