Why Michael Phelps Will Never Swim Faster Than a Dolphin 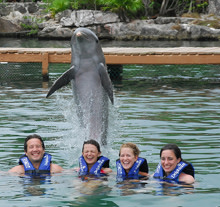 The secret to a dolphin's speed is sheer strength, according to a new study that used high-tech measurements to finally put a 70-year-old conundrum to rest. In 1936, British zoologist James Gray incredulously observed dolphins swimming at speeds of over 20 mph. He estimated that the dolphins should only be able to produce a tenth of the necessary force and imagined that something about the dolphins' skin allowed them to overcome the force of drag in the water and reach high speeds. "For the first time, I think we can safely say the puzzle is solved," said [researcher] Tim Wei..."The short answer is that dolphins are simply much stronger than Gray or many other people ever imagined."

Although most biologists had long rejected what became known as Gray's Paradox, there has never been a study to determine the strength of a dolphin's kick. To observe the powerful swimmers up close, researchers recruited two retired U.S. Navy dolphins, Primo and Puka, to swim in a specially designed tank filled with tiny bubbles that make the movement of water visible.

The tank was too small to capture video of the dolphins at full speed, so they also videotaped them performing tail stands on the water (think Sea World). The thrust was calculated based on the dolphins' weight and measurements of the wake created by their tails [AP].

Using software that tracked the rush of bubbles, the researcher

then used force measurement concepts from aerospace research to translate those velocities into a force that the dolphins' tails were producing - nearly 100kg (200lb) on average [BBC News]. That amount of thrust is about six times that of an average Olympic-level swimmer and more than triple that of swimming phenomenon Michael Phelps.

Without similar muscle mass, even the the new Speedo LZR Swimsuits wouldn't give Phelps an edge over Flipper. "There is no paradox. The dolphins always had the muscles to do this," said Frank Fish, professor of biology.... "Gray was wrong" [AP].

Wei presented his findings at yesterday's American Physical Society conference. He plans to use similar setups to

investigate flow dynamics and force generation of other marine animals, which could offer insight into how species evolved because of their swimming proficiency [UPI].