Why Gray Wolves Are Back on the Endangered Species List 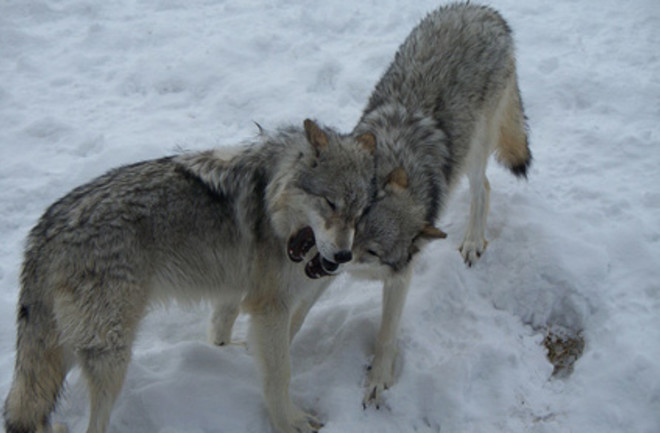 You'd think that nothing would make environmentalists happier than seeing a flagship species like the gray wolf rebound so successfully that it could be taken off the endangered species list. So why are some fighting to keep it on the list? Because wolves don't see state lines.

Wyoming, Idaho, and Montana are the battleground states for the current fight over wolves, which last week resulted in U.S. District Court Judge Donald Molloy's ruling that the species must stay on the endangered list despite its recovery. Two years ago the U.S. Interior Department declared that the wolves had reached a large enough population in Montana and Idaho to come off the list, so last year Interior Secretary Ken Salazar left them off. That allowed limited wolf hunts to begin in those states. Molloy, however, overturned the Interior Department's decision, because of the rules in Wyoming.

That's because Wyoming law allows the unregulated hunting of wolves throughout most of the state if they are taken off the endangered list. So while the federal government delisted wolves in Montana and Idaho last year after those states agreed to management plans that included controlled wolf hunts, the U.S. Fish and Wildlife Service (USFWS) kept Wyoming wolves on the endangered list [Washington Post].

The judge's ruling, then, was that the wolves must be treated as a whole population rather than individual populations in the states—after all, gray wolves don't know if they've crossed the border from Montana to Wyoming when they go looking for new territory.

"The service's decision to delist the wolf in Idaho and Montana reflected the strong commitments from the states of Idaho and Montana to manage grey wolves in a sustainable manner," says Tom Strickland of the US Fish and Wildlife Service. "Today's ruling makes it clear this wolf population cannot be delisted until the state of Wyoming has instituted an adequate management programme, similar to those of Idaho and Montana" [New Scientist].

Wyoming, of course, is trying to look after the livelihood of its ranchers, who fear losing too many livestock to predatory wolves if the populations are allowed to grow unchecked. Montana and Idaho have the same worries, but the different regulations between states result in a merry-go-round: Wyoming wants unregulated hunting to protect against the growing number of wolf packs, but because of the state's policy and the judge's decision, the wolf will stay on the endangered list and populations will continue to grow. Meanwhile, the other two states can't use the wolf management systems they want because wolves will stay endangered until their safety as a whole population can be protected.

Gray wolves were once the most widespread mammal in the world, spread throughout North America, Europe, and Asia. However, the last century of their history in the United States has seen their population winnowed to just 30 to 40 in the Yellowstone National Park region by 1920. By the time of the 1973 Endangered Species Act there were no gray wolves in the West, save a few who came down on visits from Canada. The reintroduction of the species came in the 1980s, which spurred the legal wrangling that continues today. (Minnesota is home to a gray wolf population of nearly 3,000; those have been listed as a distinct population that is threatened but not endangered.)

The tri-state legal fight will continue, as Idaho was only weeks away from opening its restricted wolf hunt and plans to appeal the court ruling.

Idaho Fish and Game officials said they remained determined to carry out a plan, nixed by Thursday's court ruling, that calls for reducing Idaho's wolf population by over 40 percent, to 500 from 845. One wolf pack in particular, a group of 100 animals in northern Idaho, is targeted for reduction by 80 percent. Montana, the second of two states where the gray wolf was ordered returned to the federal endangered species list, is likely to follow Idaho's lead in seeking permission to thin its wolf packs through licensed sport hunting or government squads of aerial gunners [Reuters].

That's the line from the state. The line from hunting groups rings with a bit more chest-thumping hubris.

Toby Bridges of the anti-wolf group Lobo Watch predicted people would be pulling triggers. "If Molloy, or any of these environmental organizations, think for a second that the decision of someone who is totally out of touch with modern wildlife management will keep hunters from killing wolves this fall and winter, they need to think again," Bridges wrote in an e-mail message.... "Any wolf that now steps out in front of any hunter this fall is very likely to be shot ... and left to rot" [The Missoulian].