Why Does the Earth Have Continents?

Our planet is made of continents and that makes us the oddball of the solar system. No other planet has continents like we do ... and it is unclear why. 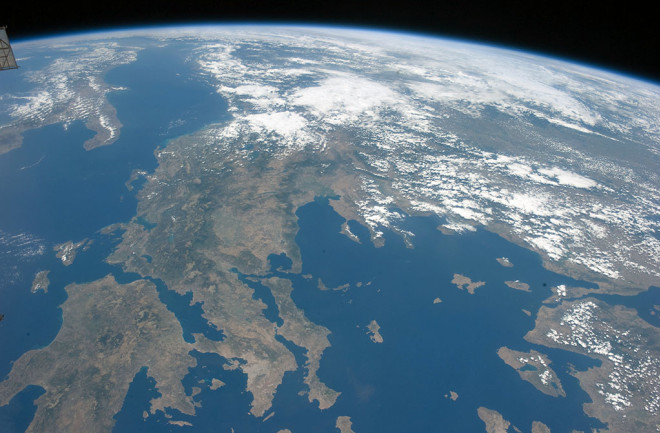 The eastern end of the Mediterranean Sea seen from space in 2011. Credit: NASA

If you were to arrive in our solar system never having seen it before, you'd be impressed with variety. Giant gas planets with rings, moons spanning from minuscule to enormous, icy comets that hurtle in from the edges, rocky planets all with varying amounts of atmospheres. It almost seems like no two planets/moons formed the same way, but one really sticks out as an oddball.

It's Earth. Our planet has liquid water (weird!) It has life (even weirder!) It has plate tectonics churning away (continued weirdness!) It even has gigantic masses of rocks unlike anything else in the solar system (totally weird!) Those masses are the continents, made of rocks like granite, sandstone, gneiss, slate, andesite, rhyolite and more.

The rest of the planets are almost entirely basalt or something close, but Earth. No, earth hides most of its basalt surface under deep oceans, instead letting its freak flag fly with continental rocks showing off to any passersby.

All of these unique features are connected. Plate tectonics may exist on Earth because we have liquid water at the surface. Life might be a product of the abundant water and volcanism. The composition of the Earth's continents might be a product of life's interactions with rock. It is all deep time evolution of minerals, rocks and organism that make Earth what it is.

What are continents anyway?

A view of part of the Canadian Shield, some of the oldest continental crust on Earth, near Yellowknife, Northwest Territories. Credit: awmcphee/Wikimedia Commons.

There is still a lot unknown about the formation of our continents. We're pretty sure that no other planet has the silica-rich continental masses that Earth possesses. Mars might have a little bit of what geologists call "evolved" rocks (in other words, more silica than basalt). Venus could have a little bit as well. The Moon has anorthosite highlands that are a bit like continents except they formed from lighter minerals floating in a primordial magma ocean ... that and those highlands are mostly all the same stuff.

No planet has the complex melange of volcanic rocks, sediment, metamorphic rocks and cooled magma that are Earth's continents. The current theory, based on the ages of tiny zircon crystals found in Australia, is that our continents may have started forming over 4 billion years ago. However, whether they all formed quickly to close to their current size or have been slowly growing over time is an open question.

What makes continents so special?

Well, they are less dense and much thicker than the other flavour of plate on Earth, oceanic plates. Our ocean basins exist mainly because the crust underneath them are denser and thinner basalt plates, meaning they sit lower on the Earth's ductile mantle (note: the Earth's mantle is not made of molten magma). The continents, on the other hand, sit high because of their lower density and thicker profile, much like a volleyball sits higher in a pool than a tennis ball (a concept we call isostasy).

This difference does more than just create the different shapes of Earth's surface. Continents are so buoyant that they can't get shoved back into Earth's mantle like the denser continental crust. Thus is born features like mountain belts formed from continental collision and subduction zones (and their volcanoes) where oceanic crust dives underneath continental crust.

The continents change as well. With plate tectonics comes the "supercontinent cycle" (also known as the Wilson Cycle) where continents collide to form massive supercontinents like Pangaea and then split apart over hundreds of millions of years. Today, the only thing we have close to a supercontinent is the amalgam of Europe, Asia and India.

The core of continents

The oldest parts of our continents are called cratons (and if those rocks are exposed at the surface, they're called shields.) They represent the nucleus of each major continent, usually much smaller than the continent as a whole. These areas haven't seen much in the ways of active tectonic processes like collisions or rifts for hundreds of millions to billions of years.

In North America, the craton stretches from northern Canada and Greenland (where the oldest rocks going back 3-4 billion years) to the south into Texas, but only parts of it are exposed at the surface. Most continents are more than just their cratons, so we know that the continents didn't form all at once in the early history of the Earth. You can check out a map of the world's cratons below to get a sense of the old cores of continents.

Map of the world's geologic provinces. The areas in orange are the oldest craton/shields. Credit: USGS.

One of the biggest questions might be what got the whole continent thing started ... and what keeps it going. It didn't seem to happen at the other rocky planets of our solar system. This means that there are some factors that are likely intrinsic to Earth -- our liquid water and molten/solid core -- that helped continents develop as fully as they have. However, as they say, that's not all.

Next week, I'll talk about some new research that suggests that the initial events that got continents to start forming might be from far out in space. At the same time, the processes that keep making our continents such compositional oddballs in the solar system could be linked to life itself. Things just get weirder when it comes to Earth's continents.