Why Do People Get Goosebumps?

Our goosebumps are one of those weird quirks that make us human. 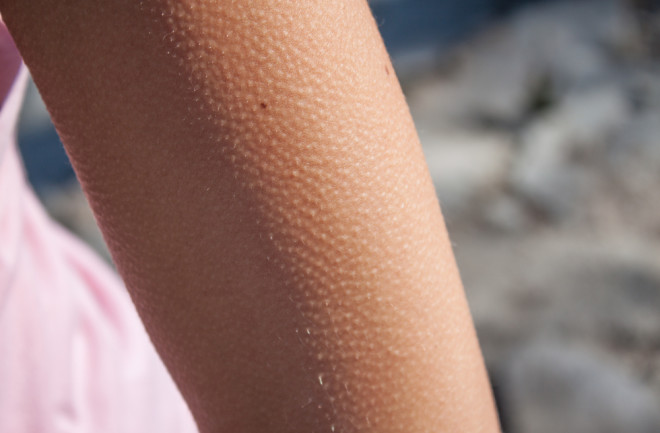 Human bodies do a lot of weird stuff. But goosebumps may be one of our strangest bodily functions.

Goosebumps are humanity’s near-universal reaction to the cold. But for some reason, those unmistakable, tiny bumps on the skin also appear when we’re scared or when we’re moved by something awe-inspiring.

What is it about these starkly different experiences that triggers a similar reaction on our skin? And why do we get goosebumps in the first place? The answers are rooted in our evolutionary history.

To modern humans, goosebumps probably don’t seem very useful. But long ago, scientists think they were practical for our ancestors.

Homo sapiens were once covered in fur — lots of it. And goosebumps, a phenomenon known as “piloerection,” provided early humans with some extra protection from the cold, functioning a bit like a built-in puffer jackets.

When we’re exposed to the cold, it makes tiny muscles at the base of each hair contract, pulling the connected hair straight up. And this involuntary reflex would have fluffed up our ancestors’ fur, trapping in a small amount of air close to the skin that would have created an insulating effect. We see this happen among other members of the animal kingdom, too, like chickens who fluff up their feathers for warmth.

And while goosebumps might be a funny name, there’s nothing funny about them when it comes to facing a foe. Hair-raising goosebumps are also a response to threats, which would have made our ancestors appear larger and scarier. Just imagine a cat or dog when the fur is about to fly. Their puffed up hair is an indication that they’re ticked off and are in fight-or-flight mode.

This cat is standing its ground. And thanks to piloerection, its raised fur makes it appear a little larger and scarier. (Credit: Peretz Partensky/Wikimedia Commons)

Even though humans lost most of their extra fur, the physiology of hair-raising goosebumps has stayed with us. But what’s really puzzling is that we don’t just get goosebumps when we’re cold or when feeling threatened. Many of us also get a shiver on the skin when we experience something beautiful or awe-inspiring.

If a song has ever left you with chills, you experienced what’s known “frisson.” Some researchers have dubbed them “skin orgasms,” and they feel like waves of sensations washing across the skin. According to Mitchell Colver, a researcher at Utah State University who has studied the phenomenon, frisson (sometimes called aesthetic chills or musical chills) are created pretty much the same way as cold chills are.

“Our emotional brain is really easy to trick into being threatened,” Colver told Discover in an email. “Our sympathetic nervous system gets all fired up and raring to go because our emotional brain says, ‘WHAT THE HELL IS THAT?!?!'”

To our brain, anything emotionally resonant — even positive and happy stuff — can get classified as a threat, at least at first, Colver says. So an angry jerk, a screech on a chalkboard or your favorite singer’s high note sounds very much the same to our brain — it’s a scream, and that means danger. This is thanks to the amygdala, a region of the brain important in processing emotions.

Emotion-stirring experiences activate our primal fight-or-flight response. When our amygdala perceives a threat — whether real or not — it sends S.O.S. signals to the hypothalamus. The hypothalamus functions a bit like a dispatch center, and its job is to push communication out to the rest of the body. This activates our sympathetic nervous system, a division of our autonomic nervous system. And when our sympathetic nervous system is activated, a jolt of the stress hormone adrenaline gets released — which triggers goosebumps as well as other involuntary stress reactions, like a racing heart and sweaty palms. Colver says the distress signals that originated from the amygdala continue up a cognitive pathway to the rational brain, where they get correctly categorized. So, often when we get goosebumps it’s because our brain got all worked up for nothing.

“Literally, in the few split seconds between our emotional brain’s interpretation and our cognitive brain’s interpretation, something really funny happens: The emotional brain fires (BLAM!) all of our typical threat-response behaviors. Goosebumps is just one of five. Then, a split-second later, the cognitive brain says, ‘No worries, settle down. This is actually great and beautiful’,” Colver explained.

That’s why you might get chills from pretty innocuous stuff, like going to a concert. A screaming crowd alone is enough trigger our goosebump reaction.

“Your emotional brain … is like a tiny, scared rabbit in the forest. It expects death around every corner. So a crowd screaming will sound just like that — something that we should be scared of,” Colver said.

And often, it’s the music itself that gives us the chills. According to Colver, certain instruments, tempos and pitches are known to cause these skin orgasms. An unexpected or particularly resonant sound can initiate our fight-or-flight response.

“Loud noises, or piercing noises (like a sustained high note played on a violin) get interpreted as really threatening,” he said.

While cold goosebumps are pretty universal, Colver says not everyone what experiences skin orgasms. It’s estimated that between 55 and 80 percent of people do, with some more prone to experiencing the phenomenon than others.

In 2015, Colver found we’re more likely to experience “emotional chills” when we’re cognitively immersed in something. And people who rank high in a particular Big Five personality trait seem to be predisposed to frisson.

“People who have a high level of openness have a much lower threshold for being thrilled,” Colver said. “While [some] people have to jump out of a plane to feel the thrills of life, [some] people that experience goosebumps just have to watch a cartoon lion get murdered while intense music plays in the background.”

In addition to personality, brain wiring might play a role as well. Another recent study suggested that people who are more prone to music chills have brains with more connectivity between auditory and emotional processing regions.

Will Our Goosebumps Go Away, Too?

Given that we shed our excess body hair a long time ago, will we eventually lose our goosebumps, too? Colver doesn’t think so. Goosebumps, even the frisson variety, are essentially a byproduct of a functional fight-or-flight response that has been with our species all along, ensuring our survival.

“The cool thing about this is that individuals who pay closer attention to their surroundings and who are also more able to interpret the stimuli correctly are most likely to survive and pass on their genes,” Colver says. “If I had to make a prediction, the percentage of people in the population who experience frisson is only going to increase in time.”