Why do killer whales go through menopause? 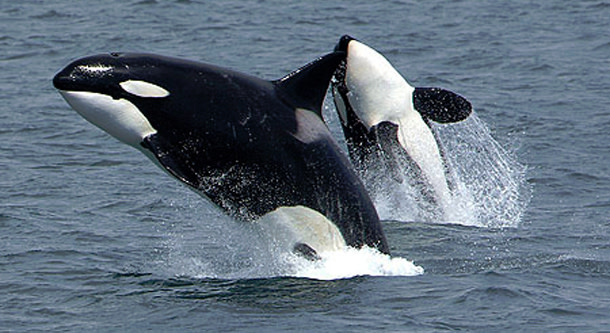 Here’s yet another reason why humans are weird: menopause. During our 40s, women permanently lose the ability to have children, but continue to live for decades. In doing this, we are virtually alone in the animal kingdom. From a cold evolutionary point of view, why would an animal continue to live past the point when it could pass on its genes to the next generation? Or put it another way: why don’t we keep on making babies till we die? Why does our reproductive lifespan cut out early? One of the most popular explanations, first proposed in the 1966, involves helpful grandmothers. Even if older women are infertile, they can still ensure that their genes cascade through future generations by caring for their children, and helping to raise their grandchildren.* There’s evidence to support this “grandmother hypothesis” in humans: It seems that mothers can indeed boost their number of grandchildren by stepping out of the reproductive rat-race as soon as their daughters join it, becoming helpers rather than competitors. Now, Emma Foster from the University of Exeter has found similar evidence among one of the only other animals that shows menopause: the killer whale. Killer whales, or orcas, become infertile during their 30s or 40s, but they can live well into their 90s. Individuals stay within the pod they were born in, which gives older mothers plenty of chances to help their children and grandchildren. The same is true for humans and pilot whales – the only other species known to have a long menopause. The question is: Does this actually matter? There’s no better place to get an answer than the Pacific North-West. Since the early 1970s, when Mike Bigg discovered that individuals could be identified from photos of their fins, scientists have conducted a thorough census of all the whales swimming off Washington state and British Columbia. Led by Ken Balcomb, they have recorded the lives of 589 individuals (and the deaths of around half of them). They have even deduced the whales’ family ties. By tapping into this rich vein of data, Foster found that a mother’s presence does help her offspring survive, even if they are full-grown adults. If sons are 30 or younger at the time of their mother’s death, they are 3 times more likely to die themselves in the next year. If they are older than 30 when mum dies, they are 8 times more likely to die. It’s clear that mothers who had been through menopause were just as useful to have around, and probably more so, than those who are still fertile. On average, a 30+ male is 8 times more likely to die in the next year if his mother passes away, but his odds actually go up by 14 times if mum had gone through menopause. This confirms that mothers are helping their sons well into adulthood, since older orcas actually benefit from mum’s presence more than young ones. Perhaps she helps them to hunt, or maybe she watches their backs during fights with rivals. “It would be great if we knew more about orca social behaviour, in particular just what benefits mothers are conferring,” says Michael Cant from the University of Exeter, who has studied killer whale menopause himself. “But working on [these animals] is just enormously challenging, and this is very rare and hard-won data. Given the constraints... this is a provocative and stimulating result.” Foster also found that killer whale daughters don’t depend on their mothers in the same way. If mum died, younger daughters were fine, and older ones were just 3 times more likely to die in the next year. You can see this in the graph below: the death of a mother has a far smaller impact upon her daughters (red lines) than upon her sons (blue lines). 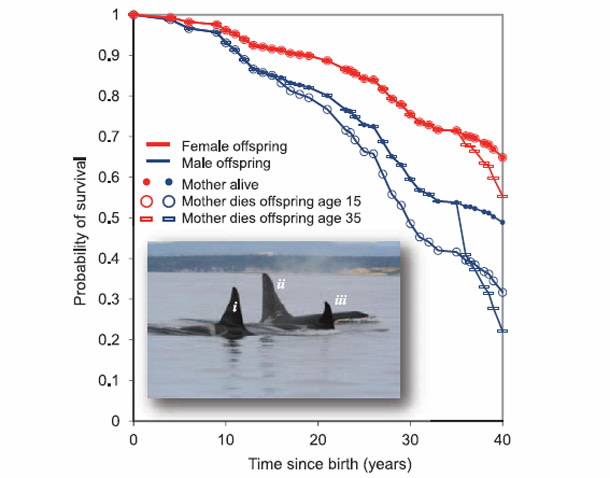 This gender difference is exactly what you’d predict. Put yourself in a mother orca’s perspective. Orcas mate between groups, so your son’s offspring will be raised in another pod but your daughter’s offspring will stay in the home pod and compete for resources. For as many grand-calves as possible, but as little direct competition as possible, it’s better for you to help your sons with their parenting than your daughters. “It is exciting to see this result, which would otherwise be rather unexpected and puzzling,” says Cant. “If we find out more about menopause in cetaceans, it may help us to better understand the forces that shaped our own unusual life history.”

*There are some other explanations that we can rule out. It’s not that old age is a symptom of modern society, and humans never used to live beyond menopause. Hunter-gatherers go through menopause and are surprisingly long-lived. Among the Ache of Paraguay or the Hadza of Tanzania, around half of women survive to 45, and continue living into their late 60s. Other scientists point to the fact that we’re born with a full set of eggs that constantly depletes, but this disappearing act doubles in speed at the age of 40. Chimpanzees, monkeys and mice, which also have the same egg starter kits, don’t go through a similar acceleration. Finally, it’s not an inevitable consequence of long life that ovaries just stop working, since long-lived mammals like elephants and blue whales can breed into their 60s and 90s. There’s another idea that’s more compelling, suggested by Dustin Penn

: “Women retire early from child-bearing for the same reasons that athletes retire from their sports at a young age – their bodies cannot handle the strain. Childbirth is a taxing process for a woman and at some point, it becomes too risky for mother and child. Menopause is an evolutionary respite from the burdens of having children. Reference: Foster, Franks, Mazzi, Darden, Balcomb, Ford & Croft. 2012 Adaptive Prolonged Postreproductive Life Span in Killer Whales. Science http://dx.doi.org/10.1126/science.1224198