Why Do Humans Have Wisdom Teeth That Need to Be Removed? 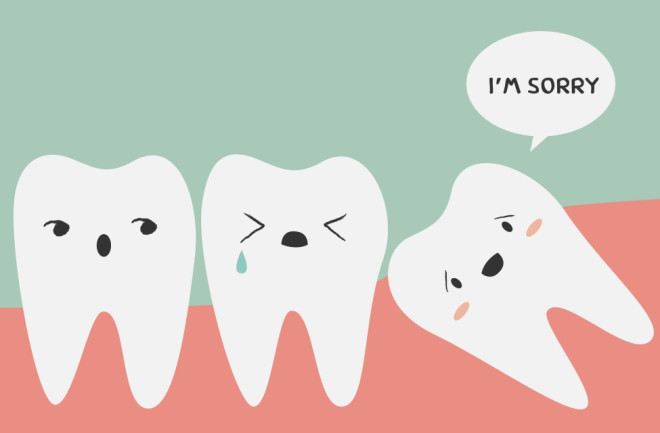 Wisdom teeth seem like a biological mishap. Our third and final set of molars to grow, wisdom teeth don’t quite fit in many people’s mouths, leading to millions of surgeries per year. But in some people, these "extra" teeth come in just fine, while others don't have them at all. What’s the biological story here?

First let’s establish what’s probably not the story: Conventional wisdom about wisdom teeth assumes evolution was doing away with these unnecessary chompers until modern medicine halted the process. Throughout childhood, our permanent teeth emerge from the gums in a gradual sequence, starting with the first molar and incisors between ages 6 to 9 (Table 5.1). By our early teens most teeth are in place, except for the third molars (M3s), which usually appear between ages 17 and 24. If there’s not enough space left, wisdom teeth become impacted, or unable to penetrate the gums properly.

According to the standard story, before surgical intervention, people with impacted M3s perished. Those lacking the problematic teeth flourished, passing on genes for reduced dentition to future generations. Today, thanks to oral surgeons, individuals with impacted teeth survive and contribute to the gene pool.

But decades of research challenges this survival-of-the-toothless explanation. Many scholars now propose that third molar problems stem from our eating softer foods as children, made possible by farming and industrialization.

Thus, according to this view, overcrowding in our mouths is not an evolutionary issue, it’s a developmental one. Inherited genes don’t entirely dictate the fate of wisdom teeth. Rather, diets and chewing habits during childhood probably have the most impact.

The Back Story of Back Molars

Like all apes, human ancestors had a lineup of 32 teeth: two incisors, one canine, two premolars and three molars, mirrored on both sides of our upper and lower jaws. Today, humans may or may not develop the final back molars.

Worldwide, it’s estimated that one or more wisdom teeth are absent in about 22 percent of people and become impacted in 24 percent. The flip side: Over half the planet forms normal, functioning wisdom teeth. So when in human evolution did wisdom teeth become wild cards?

Several million years ago, our hominin ancestors had humongous back teeth. Australopith species (~2 to 4 million years ago), like the Lucy fossil, had molars with chewing surfaces about twice the area of ours today — despite the fact that these creatures were just three to four feet tall, with skulls less than one-third Homo sapiens’ cranial volume. Since the era of Australopiths, dental size has been on the decline in the human lineage. By ~2 million years ago in Homo erectus, molar surface area was about 1.5 times what it is today.

Changes to our teeth as humans evolved seem to line up with advancements in diet and food preparation techniques. First, by the time of Homo erectus, stone tools for pounding and cooking would have softened wild foods, making chewing easier — and mega chompers less critical.

Around 12,000 years ago, humans began to experiment with farming, and this lifestyle ultimately took hold in most societies. Domesticated products, like wheat flour and cow’s milk, make for much softer diets than wild foods.

And lastly, the industrialization of food production has really softened our meals. In Westernized populations, people slurp protein shakes, devour spongy Big Macs and munch gummy snacks. A far cry from the kudu meat and mongongo nuts eaten by some present-day foragers.

Use Them or Lose Them

So the idea is that processed and/or agricultural diets reduce the stress on our jaws necessary to induce full growth during adolescence. By the time we’re breaching adulthood, there may not be enough space to accommodate our final molars.

This hypothesis is supported by comparisons of jaw size and M3 formation across different societies. A 2011 paper measured skulls housed in museums from six farming and five foraging groups. The farmers, raised on softer foods, consistently had shorter jaws, which would have provided less space for tooth formation.

This finding is consistent with the notion that diet influences jaw size. Using more advanced statistical methods on a greater number of skulls, anthropologists in 2017 came to similar conclusions: They detected “modest” but reliable differences between foragers and farmers, particularly if the latter group had dairy products. Other researchers have shown this trend over time, though with only a couple dozen skeletal specimens.

Similarly, access to processed foods is a big predictor of wisdom teeth problems across societies. For example, one study looked at third molar impactions among 900 rural and urban people in South India. Impactions occurred in about 15 percent of rural participants, compared to nearly 30 percent of the urban dwellers. In Nigeria, another paper found impacted third molars were seven times more common in urban versus rural people, based on 2,400 participants. A third line of evidence comes from experiments with animals raised on soft or hard foods, or sometimes the same diet either cooked (soft) or raw (hard).

These studies, though, don't explain why some people don't have wisdom teeth. The complete disappearance of third molars in some cases may indeed be an example of recent evolution, in which people lacking wisdom teeth didn't face dental crowding issues and weren't at a chewing disadvantage because their diets had softened.

Furthermore, based on the above studies, it’s unclear which dietary changes — tool use, cooking, domestication or industrialization — triggered our wisdom teeth issues. But their cumulative effect is certain: Today, people eat considerably softer foods than our ancestors did, and our mouths aren’t growing to their full potential.

Consequently, many dental scientists recommend increasing the number of crunchy, hard foods on your kids’ plates. Some additional raw fruits, veggies and nuts could potentially prevent later wisdom teeth extractions. As anthropologist Julia Boughner put it writing for The Conversation, “While science can’t yet say for sure that it will work, it probably can’t hurt.”