Why Do Houseplants Have Holey Leaves?

Inspired by a plant in his office, a researcher created a mathematical model to explain why foliage holes could be a smart strategy. 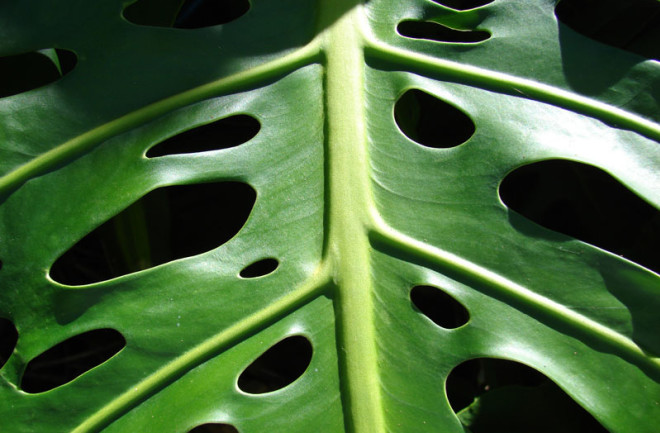 Monstera deliciosa, a tropical plant named for its aberrant leaf shape and tasty fruit, makes the most of the sunshine it receives with the unusual perforations in its leaves. Forest and Kim Starr/Wikimedia Commons

Evolutionary biologist Christopher Muir has seen plenty of unusual vegetation while exploring tropical rainforests, from a foot-long flower to a plant that uses ants to protect itself. But it was in a hallway near his office at the University of the Balearic Islands in Spain that he spied something truly memorable: a holey houseplant, Monstera deliciosa, also known as the Swiss cheese plant for the large holes that punctuate its leaves.

The plant immediately struck Muir (a distant relative of famed naturalist John Muir) as odd because plants need to maximize surface area to absorb as much sunlight as possible. They can do this by either having lots of small leaves, or fewer large ones.

Why, Muir wondered, would this large-leafed plant punch windows in its foliage? Searching for a plausible evolutionary explanation, he considered where the plant naturally grows: in thick tropical forests, clinging to the trunks of trees about midway between ground and canopy. Might the holes somehow help Monsteracapture the sparse, dappled sunlight that filters down through the thick trees?

Muir proposed to solve the puzzle by creating a mathematical model that captures the relationship between a leaf’s shape, size and ability to intercept stray glints of sunlight that filter through the canopy. He saw that surface area wasn’t everything: By extending a leaf’s overall size while keeping living, energy-greedy matter to a minimum, the plant increases the odds that at least some of the splotchy sunlight will strike each leaf.

It’s a smart strategy. “If you have some resources you’re going to allocate to make a leaf, you can make it smaller but completely filled in, or make windows and take up a larger area,” Muir says. “If light is relatively random, it makes sense to spread the leaf area you have … to give you more chances to intercept those sun flecks.

[This article originally appeared in print as "O Holey Leaf."]