Why Do Animals Fight — And What Do They Fight About?

In the wild, confrontations are common between both members of the same species and those of different species. Just don’t get between a mama bear and her cubs. 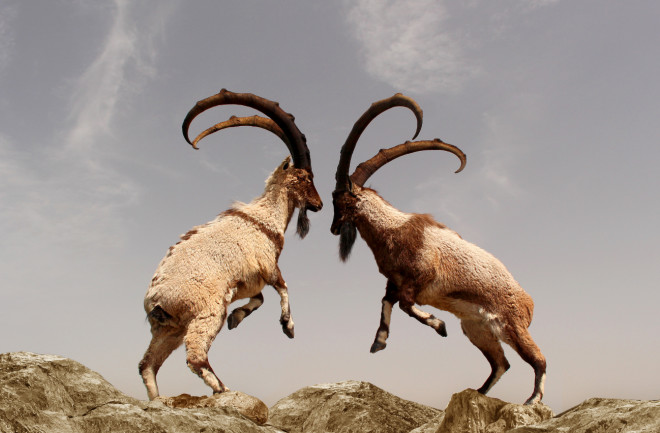 With 8.7 million animal species living in the world, it’s no wonder they don’t always get along. In fact, animal fights are a regular part of living and surviving in the wild. The ability is an important indicator of an animal’s capacity to survive in the face of danger.

But this combat isn’t just between predator and prey. Scientists classify conflicts in two ways: Those encounters between members of different species are called interspecific conflicts, and those that occur within the same species — sometimes even within specific clans or families — are intraspecific.

Close Encounters of the Interspecific Kind

The dance between predator and prey is one struggle we’re all aware of, especially parents (human and otherwise), who are primed to protect their young from the maw of a predator. Hikers who regularly spend time in the wilderness know better than to get between a bear and her cubs, or a mountain lion and her kittens. But did you know that pregnant or recently parented animals tend to show heightened signs of aggression? And this isn’t relegated solely to mothers. Male weasels, for example, bare their teeth and attack quickly when they perceive threats to their young.

Because animals need a place to live and access to resources, they also fight over territory. Some are more territorial than others, but all must stake their claim somehow. Eastern bluebirds have carved out a niche so desirable to other birds, for example, that they’re now considered a threatened species in the avian world. But that doesn’t stop the male bluebird from defending the one- to two-acre territory he staked out to ensure success in nesting, laying eggs and hatching them. The male’s ability to chase out cowbirds, sparrows, wrens and woodpeckers ensures his legacy is carried into the next generation.

And while mating within a species may seem like a given, attempts to mate with other species do occur — and, understandably, bring about conflict. In the case of damselflies, this is purely due to confusion. Male damselflies have difficulty distinguishing females of their own species from those of others, due to similar coloring. This means the males will battle it out for territory and mates, whether they’re compatible or not. And because the insects are naturally so aggressive, these fights are common.

All In the Family

There’s struggle and competition for resources within species too. Male damselflies exhibit such conflict-centric and aggressive behavior because they have a relatively short time to mate with females of their species: just a couple of weeks to live, fight off other suitors and mate. The victors then pass their aggressive DNA into the next generation of damselflies.

Some animals live longer, confining their aggression to the mating season. Frogs, for example, must stake out territory and call potential mates at breeding time. They defend the area from other males as needed, but reduce their aggression in the off-season.

Younger males of chimp clans might also chase out older males to reduce competition for resources, territory and access to mates. Animal behavior expert Gordon Burghardt from the University of Tennessee, Knoxville, says there are “lots of fights due to social status and then access to resources.”

Read more: Why Are Chimpanzees and Gorillas Suddenly Going to War?

This ties directly to dominance hierarchies, or the networks of social power relations among members of a species. Sibling rivalries, besides being something most of us are familiar with, are evidence of this struggle for dominance. “Animals can fight over food and at carcasses,” Burghardt says, when dominance-related fights break out.

Pros and Cons of Power

Dominance certainly has benefits among some animal species. Within a population of Senegalese sole, a typically non-aggressive flatfish, for instance, researchers observed dominant behaviors more often in areas where territory or resources were scarce. In this instance, dominance was an important mechanism for survival.

But in other species, like baboons, dominance can sometimes have negative consequences. These dominant males tend to defend their subordinates from others; when dominant males are absent, subordinates are more likely to be hurt or killed by more domineering types. The result is a drop in population.

And the fitness of the male, though not always synonymous with dominance, plays an important role as well. An aggressive baboon might have the guts to stand up to other members of his clan, but that doesn’t automatically ensure his ability to fight off predators or secure resources. When subordinates follow this type of male, they’re more likely to become a detriment to their clan.

One very interesting form of fighting within an animal species, however, isn’t based in aggression or the need to defend territory from competing mates. It’s play! Play fighting occurs among all sorts of animals and involves reciprocal play bites and scratches that don’t do any harm.

The function of play conflict has interested scientists for quite some time. Researchers in Alberta, Canada found that it serves to help animals monitor their behavior in interpersonal relationships among their own families. Play also trains animals to learn the best methods of survival — so that when a real conflict arises, they have the skills to survive. Different modes of play also help the development of animal brains, allowing them to exhibit more adaptability in the face of environmental pressures. So go ahead, roughhouse with your siblings a little more often for the good of the clan.