Why did the chicken cross the road? Maybe it was looking for its penis.

Warning: the following may be considered NSFW, particularly if your employer finds avian genitalia inappropriate.  Thanks to the detailed research of Patricia Brennan and the fluent coverage of it by Ed Yong and Carl Zimmer, a lot of people have not only heard of the impressive duck penis, they've seen it in all its explosive glory (if you don't know what I'm talking about, take a moment to click on the links above — trust me, it's worth it). 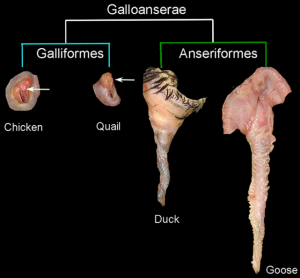 Why do chickens and other birds lack the fancy phalluses of their relatives? Good question. At least, now, we know how...Image from Herrera et al., Fig 1. But while ducks and their fellow water fowl boast these impressive, large penises, the penes of most birds are nothing to squawk about. Ninety-seven percent — over 10,000 species of birds — have either reduced or non-existant penises that are incapable of penetration. "One of the most puzzling events in evolution is the reduction and loss of the phallus in birds," explains biologist Marty Cohn in a Cell Press Video Abstract. "It's remarkable that a group of animals would eliminate a structure that is so important for reproduction." Given that, like us, birds conceive through internal fertilization, you would think a penis would be essential. How else is the male's sperm supposed to get all up in the female's vagina? While scientists still debate about why the chicken lost most of its penis, a new study published this week in Current Biology finally explains how it was lost, a crucial first step in unraveling this evolutionary enigma. 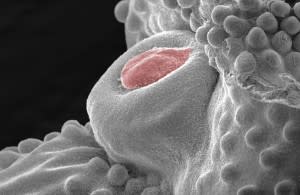 Chick porn: a developing chicken's penis (red) before it regresses, visualized by a scanning electron microscope.Image c/o A.M. Herrera and M.J. Cohn, University of Florida Marty Cohn and his lab at the University of Florida study the development and evolution of appendages, and are particularly interested in the bird penis conundrum. "It really catches your attention when you see a species that reproduces by internal fertilization and realize that it lacks a penis, which we tend to think of as a critical organ for this mode of reproduction," explains lead author of the study and Cohn's graduate student Ana Herrera. To get to the bottom of mystery of avian penises, Herrera and fellow grad student Claire Perriton, with the aid of undergrad Simone Shuster, watched developing bird embryos closely to see exactly when and how the development of genitalia in the micropenis-wielding chickens diverges from that of their well-endowed duck cousins. They found that through the first stages of development, the two embryos grow the same way. Male chickens begin life with a normally-forming penis. But then, as development progresses, everything changes. In chickens, the penis stops growing and even shrinks, while the duck penis continues to extend and extend, eventually coiling. When the team began examining these developmental penises at the cellular level, they expected that the cessation of growth by the chicken's penis would be due to a decrease in cell division — but it wasn't. "We expected to find that some critical outgrowth factor was missing," said Cohn. Instead, the proliferation pathways in developing duck and chicken penises were the same, even after the stage when the chicken penis starts to regress. Since the signal for penis enlargement is steady throughout, the team realized that developmental penis growth has to be controlled instead by cell death.