Why Did Earth Have a Poison-Filled "Boring Billion" Years?

Andrew Kroll argues that during this apparently stagnant time, monumental changes were afoot, setting the stage for the geyser of evolutionary change that followed, and the complex world we see today.

This article is a small sample from DISCOVER's special issue on evolution. 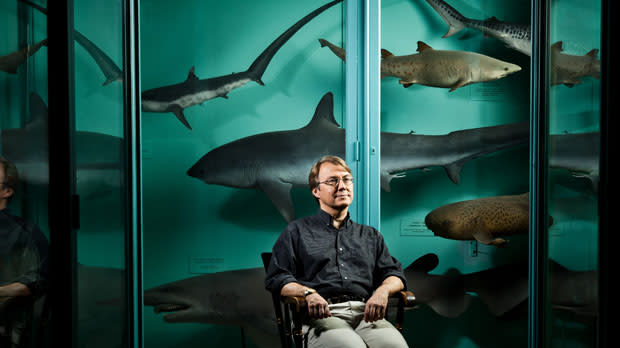 Almost 2 billion years ago, evolution came down with a puzzling case of the blahs. For roughly an eon, life on Earth changed but little, dominated by hardy microbes in oceans starved of oxygen. The sheer monotony of the geologic record for this period inspired scientists to nickname it the Boring Billion. The moniker is unfair, says Andrew Knoll, professor of natural history and of Earth and planetary sciences at Harvard University.

During the Boring Billion, the planet’s oceans were light on oxygen and heavy on toxic hydrogen sulfide. What was life like under such harsh conditions?

Most of the biomass in the oceans would have been bacteria and archaea [another type of microbial organism that often inhabits extreme environments]. This was probably the golden age for bacteria that photosynthesize in the absence of oxygen, using hydrogen sulfide rather than water. Some of the bacteria were single-celled; some were multicellular filaments or sheets. We also have evidence of microbial mats. You just had slime over the seafloor. In this interval we start having fossil evidence of eukaryotic organisms—things with a cell nucleus, like us. But there’s not a great diversity of them. Eukaryotes are, at best, playing a rather limited role.

How did the planet get this way?

During the first 2 billion years of Earth’s history, there was no oxygen in the atmosphere or oceans. That began to change about 2.4 billion years ago. The best idea, from Don Canfield [of the University of Southern Denmark], is that building up a little bit of atmospheric oxygen causes iron pyrite minerals in the continents to oxidize and form sulfate. Rivers carry sulfate into the ocean, where certain bacteria convert it into hydrogen sulfide.

By about 1.8 billion years ago, we start seeing oceans in which the surface had a little bit of oxygen, but just beneath the surface you would regularly encounter sulfide but no oxygen. Along with my colleagues Dave Johnston and Ann Pearson at Harvard and NASA’s Felisa Wolfe-Simon, I hypothesize that biological feedback cycles, including one involving sulfide-based photosynthesis, would tend to maintain this world in which oxygen levels remain low and sulfide high [for the next “boring” billion years]. During this time, bacteria that can use hydrogen sulfide for photosynthesis are as happy as clams. But sulfide is generally toxic to eukaryotes—most of which have mitochondria [the structures inside cells that produce energy]—because it inhibits their ability to respire. So those conditions could have put a brake on the expansion of eukaryotic cells.

How do you even know what was living so long ago?

You look for rocks of appropriate age, which we can determine by measuring radioactive uranium isotopes and their products in the volcanic rocks interspersed with them, and study their composition. There you can find actual body fossils, which can be preserved beautifully. There are also organic molecules preserved in sedimentary rocks. DNA and proteins don’t preserve very well, but lipids [fatty molecules] do, and we can identify different organisms through characteristic lipids. We also look for fossils of structures called stromatolites, which are reefs built by microbial communities. Those tell us a great deal about the distribution of life on the seafloors.

If the conditions were so great for sulfur-loving bacteria back then, why didn’t they evolve greater complexity?

Prokaryotic organisms—bacteria, archaea—probably lack the genetic makeup to do that. Eukaryotic cells have a very sophisticated pattern of gene regulation, much more complicated than the comparable system in bacteria. It allows eukaryotic cells to evolve into multicellular organisms that have remarkable structural and functional variation. Bacteria have been around for something close to 4 billion years and yet have never evolved multicellular complexity that comes anywhere close to what eukaryotes have evolved—nothing like even a sponge, let alone a human being.

How can you verify your picture of life during the Boring Billion?

The idea that sulfide-based photosynthesis was important during the Boring Billion is based on one limited data set from drill cores in northern Australia showing pigment molecules associated with sulfide-using bacteria. We predict that when people do a more thorough job of evaluating the organic matter in rocks of this age, they will see a wider distribution of these molecular fossils.

After so many years of stagnation, how did evolution get going again?

A lot of people think that tectonics is what bumped life into a different world. You see some tectonic change during the Boring Billion, but you don’t have the kind of wholesale continental collisions you have both before it starts and just when it ends. That continental breakup may have been accompanied by a great increase in hydrothermal vent activity, which produces large amounts of iron. If sulfide-rich subsurface waters posed a continuing challenge to eukaryotic organisms, the shift to iron-rich subsurface waters would have removed this challenge.

As the Boring Billion closes, things really happen. Geochemical evidence shows that we begin losing sulfidic waters about 800 million years ago. At the same time, paleontology tells us that eukaryotes are diversifying and expanding over large areas of the ocean. Molecular evidence suggests that animals start to differentiate around then.

There are now major fluctuations in the carbon cycle never before seen. We have multiple glaciations, of which at least two seem to have pretty much covered the world. And we have oxygen rise, so that we come to have a world much more like the world that we know. The 300 million years after the end of the Boring Billion are probably the most eventful 300 million years in our planet’s history.

So you would say that calling it the Boring Billion sells this period short?

Very much so. One reason is that understanding the interval’s stability may be more of a challenge than understanding the change we see both before and after. And we know it wasn’t that evolution stopped. In fact, there’s reason to believe that all of the properties of cell biology that made complex life possible in the next geologic era were put in place here: cytoskeletons that allow eukaryotic cells to change shape, and cell polarity that allows cells to send a molecular message to one side of the cell but not the other, and to interact with nearby cells. The molecular circuitry and cross talk that allow complex organisms like us to exist today all took root in the so-called Boring Billion.

You recently showed that the oceans had an abundance of sulfide and a dearth of oxygen during a later period as well, around 500 million years ago. Evolution slowed down then, too. Is this a regular pattern?

Yes, but it is less and less frequent. If you look at the last 65 million years, in the so-called Cenozoic era, I don’t think there are any examples of globally widespread subsurface oxygen depletion. In the previous era, the Mesozoic, from 65 to 250 million years ago, there were six or seven such oceanic anoxic events. They were short, sharp shocks. Going back even farther, in the Proterozoic, these kinds of environments were everywhere. Over the course of time, it goes from being ubiquitous to repetitive to rare to absent—more evidence that we live at an unusual time in the history of Earth.

You are a member of the Mars Rover science team. What parallels do you see between the geologic history of Earth and Mars?

We can apply what we’ve learned about studying ancient rocks on Earth to Mars. NASA’s Mars Exploration Rovers have enabled us to examine 3.5- to 4-billion-year-old sedimentary rocks on Mars, in much the same way that we study ancient strata on Earth. We’ve learned that liquid water was present on the Martian surface during this interval, but also that its chemical makeup and short duration would have challenged any known life-forms. Mars was wetter very early in its history, but the probability that it was ever a blue planet like the Earth is, I think, remote. The more we learn about Mars, the more it seems to me a planet that’s very different from Earth.

So you don’t think we’ll find signs of life on Mars?

It’s not impossible, but I wouldn’t bet large sums of money on it.