Why cooperation is hard for people with borderline personality disorder

Social lives are delicate things. We've all had situations where friendships and relationships have been dented and broken, and we're reasonably skilled at repairing the damage. This ability to keep our social ties from snapping relies on being able to read other people, and on knowing a thing or two about what's normal in human society. 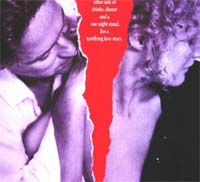 For instance, we appreciate that cheating fosters ill-will, while generosity can engender trust. So cheaters might try to win back their companions with giving gestures. These little exchanges are the glue that bind groups of people into happy and cooperative wholes. Now, a new study uses psychological games and brain scans to show what happens when they go amiss.

Brooks King-Casas at Baylor College of Medicine used a simple game to compare the social skills of healthy volunteers with those of people diagnosed with psychiatric condition called borderline personality disorder (BPD). People who suffer from BPD show erratic mood-swings and find it difficult to trust and understand the motives of others. As a result, they suffer from fraught personal relationships with friends, colleagues and partners.

So it was in the games. Each one was played by two players, an investor and a trustee, over the course of 10 rounds. The investor was given a princely sum of $20 and could split as much of it as they liked with the trustee. This investment was tripled and the trustee could then decide how much to return to the investor. Trust and cooperation is essential if both players are to benefit. The investor can make the most money by trusting the trustee with a sizeable share, on the assumption that some of it will find its way back. If the trustee violates that agreement, they are likely to get smaller investments in future rounds. 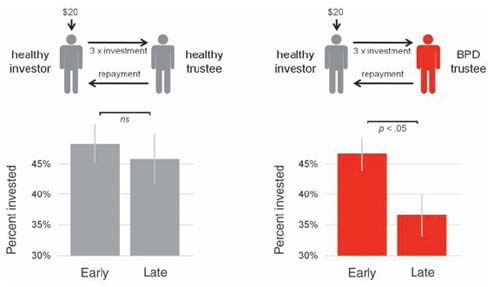 When healthy people played both parts, King-Casas saw that their alliance remained stable throughout the game. Investors tend to start the games by offering just under 50% of their loot, and at the end, they were still as generous. But when people with BPD played the trustee role, cooperation started to break down and by the 10^th round, investors were putting in a meagre 35% or so of their money.

In both cases, the odd lapse in trust threatened to sunder the players' cooperative spirit. The difference was that the healthy trustees knew how to remedy the situation, and King-Casas discovered this by focusing on "low-cooperation" rounds where the investors offered $5 or less. Such a low offer could well be seen as a slight, and trustees could either retaliate and giving back a similarly paltry sum, or try to fix the broken relationship by offering the investor a larger profit-making return.

The healthy volunteers were almost twice as likely to use the latter strategy than those with BPD (45% of the time compared to 25%). And this "coaxing" proved to be the most successful strategy; it proved that the trustee was trustworthy, and led to increasingly large investments in later rounds. So in social interactions, people with BPD are both more likely to cause rifts in cooperation, and less likely to be able to mend them successfully. Why?

To find out, King-Casas looked for activity in the brain that might reflect these behavioural tics. Specifically, he searched for areas which respond differently in healthy and BPD brains, in response to the size of the investors' investment. He found one - the anterior insula.

Other psychological studies have suggested that this part of the brain plays a role in assessing fairness, and it has a particular propensity for reacting to injustice. In ultimatum games, where one player offers a share of a pot and the other decides whether to take it, the anterior insula is most active when offers are low and when players reject. When people watch someone else being punished, their anterior insula is most active when the parties are punished after apparent fair play, and least active when an actual cheat gets their comeuppance.

King-Casas found similar patterns in his players. In the brains of healthy trustees, activity in the anterior insula shot up in response to low investments, and diminished as the offerings grew bigger. But in the brains of BPD trustees, there was no such clear-cut pattern; their insulas seemed to be equally active in all cases. To account for other differences between the two groups, the team adjusted for differences in age, sex, IQ, education, income level or any medications they were taking, but to no effect - the results stood their ground. 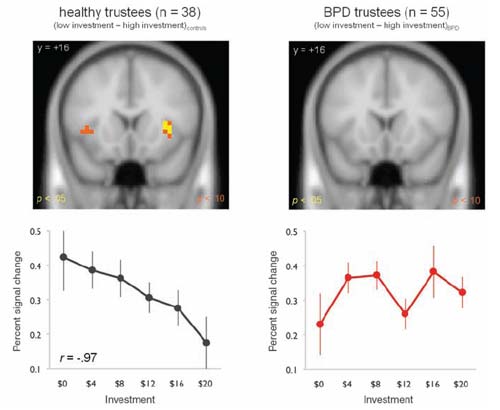 However, the insula's activity also changed when players were deciding how much to send back and this itme, both groups, with or without BPD, behaved in the same way. The stronger the activity in this area, the greater the chances of low repayments. So in volunteers with BPD, the insula is insensitive to the size of an offer but not its repayment. Clearly, it's not the case that the entire region is faulty so what's actually going on?

This sense of what's normal in social interactions is either badly askew or missing entirely in people with BPD. King-Casas supported this theory by giving his volunteers a questionnaire to assess the outcomes they would expect of typical social situations. Their responses showed that the BPD group showed far less trust than their peers did.

This interpretation helps us to view the exchange game through new eyes, and explains why cooperation broke down between healthy investors and BPD players. The two were badly mismatched because each had a fundamental problem with understanding the other's intentions.

The investor might offer a small sum to say, "I don't trust you and I expect a sign of solidarity." But the BPD trustee wouldn't understand the investor's ploy - to their minds, they received what they expected and they had no incentive to try and foster the investor's good will. So they offer a small return. To the investor, that looks like a slight and a confirmation that cooperation had been abandoned, and they too have no incentive to fix the ruptured relationship.