Baby leatherback sea turtles can barely see in their journey to the ocean, and light pollution isn't helping. 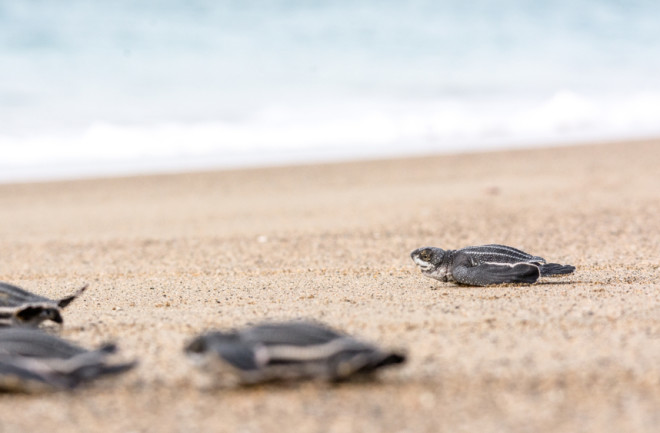 Navigating the watery milieu of the open ocean is a challenge for any species. And it’s even trickier for sea turtles, who as hatchlings must survive a mad dash from land to sea before spending the rest of their days underwater.

"Lots of things like to eat [hatchling sea turtles]," says Samantha Trail, a Ph.D. student at the Marine Science Laboratory of Florida Atlantic University and lead author of a new study on marine turtle sea-finding behavior. "Night herons, ghost crabs, raccoons, coyotes — even once they get in the water we have fish that like to eat these guys."

Trail’s study shows that hatchling leatherback turtles (Dermochelys coriacea) sometimes struggle to see the sea. The International Union for Conservation of Nature currently lists these turtles as vulnerable, and they may be at risk from light pollution, which has been a growing global issue for decades.

"[Our paper] strengthens the argument that not only are all of these turtles having trouble with [light pollution], but [leatherbacks] may be even more susceptible," says Trail.

The Dangers of Circling

According to the National Ocean Service, only between one in 1,000 and one in 10,000 sea turtles survive to adulthood. Given these odds, you would think natural selection would shape sea turtle vision to help them best navigate towards the ocean. But Trail’s study found otherwise.

The study aimed to identify why leatherbacks seemed disoriented more frequently while navigating to the ocean than their relatives, loggerhead turtles. This disorientation leads to a behavior called circling, which is exactly what is sounds like — the turtles get confused about where the ocean is and spin around in circles looking for it.

Circling puts turtles at risk for predators, and is also a waste of energy that is needed once they make it to the water. To understand why leatherbacks exhibit this behavior, Trail and her co-author, Michael Salmon, examined the visual perception of leatherbacks and loggerheads under different moon phases.

Baby sea turtles find the water by "looking for the lowest and brightest horizon," says Trail. "They’re looking at a very narrow, but wide field of view."

While there’s a popular misconception that sea turtles navigate using the moon, in reality they don’t look up while making their daring trek. The moon still plays a critical role though. When the moon is full and bright, it reflects off the water and provides a stronger visual cue for the turtles to orient toward.

Bright city lights can confuse the turtles. To combat circling, some localities in Florida implement “lights out” policies during turtle nesting season. And various conservation organizations that monitor turtle nests are cognizant of circling. If they see tell-tale tracks in the sand, they alert local light producers to flip their switches off.

Leatherback eyes are less sensitive to all wavelengths of light than loggerheads, and during a dark night, they can’t tell where the horizon is. This result surprised Trail.

"When you look at what the photoreceptors are capable of doing from a physiological perspective, this is not what we anticipated to see," says Trail. She expected the leatherback eyes to be more sharply tuned than their relatives, because of how they go about finding food as adults.

"They’re deep divers and we think they’re foraging at those depths," says Trail. But instead, "across all wavelengths, even those that they’re most sensitive to, [leatherbacks] appear to be around 10 to 100 times less sensitive than their hard-shelled relatives."

Even though leatherbacks swim in the dark as adults, they don’t seem to be well-adapted for it. Along with poor light sensitivity, they also don’t have big eyes that are typical of nocturnal animals. Despite this, Trail hypothesizes that leatherback vision was adapted for their lives as adults, with those later-life benefits coming at the cost of early-life struggles.

"When they’re foraging at depth, perhaps what they’re sensitive to is bright enough, and what they’re hunting for tends to be pretty large and slow moving," says Trail. "They like these pyrosomes," refers Trail to colonial tunicates that can reach up to 60 feet in length. "And some of the prey that they’re looking for is bioluminescent. It’s not like they have to strain their eyes to see those things," says Trail.

Leatherbacks are the only marine turtles that spend their entire adult lives in the open sea, hunting for jellyfish and pyrosomes. "They’re quite good at seeing below and in front of them, which you can imagine during sea-finding isn’t super helpful, looking at the sand," says Trail.

This is a classic case of an evolutionary trade-off, where the traits of adult vision and hatchling vision are in conflict with each other. To best see floating jellyfish in the vast, sometimes dark, open sea, leatherbacks sacrifice the ability to see the horizon as hatchlings.

Leatherbacks are unique animals, somehow surviving almost entirely on low-nutrient jellyfish while also growing to be the largest turtles in the world. Their early lives as hatchlings are hard enough without the bright lights of our civilization to confuse them, but there are ways we can help prevent their population’s decline.

If only we could get them some glasses so they could see the horizon better!