Why aren’t all chillies hot? 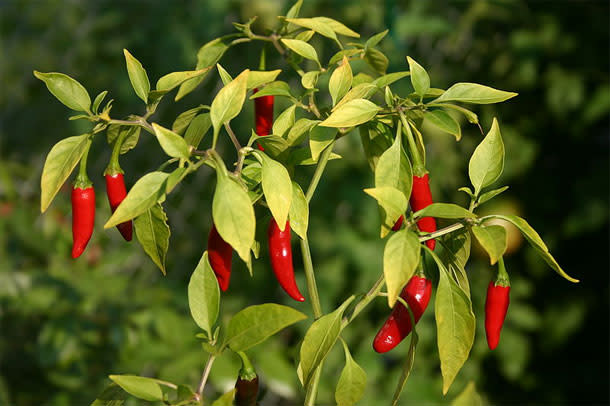 Chillies come in many degrees of heat, from the sweet painless bell peppers to the “Trinidad Scorpion Butch T pepper”, a superlatively hot chili that needs to be handled with gloves. A less dramatic range also exists in the wild: some chillies are hot, and others are not. In supermarkets, the spectrum of heat is the result of clever breeding. It the wild, it’s due to a tension between two threats: drought and disease. Hot chillies owe their mouth-watering bite to substances call capsaicinoids – a unique breed of chemical weapon wielded only by these plants. The weapon targets proteins that detect excessive heat, delivering an intense burning feeling without any actual burning. Birds, which pollinate chillies, don’t have these proteins and are immune to the fiery tastes. Mammals aren’t so fortunate; against them, capsaicinoids are an effective deterrent. But pilfering mammals are not the biggest threats that wild chillies face. In 2008, Joshua Tewksbury at the University of Washington showed that their most important foe is a fungus called Fusarium semitectum, which rots the fruits and kills the seeds. Tewksbury showed that capsaicinoids kill the fungus, and chillies that lack their protection have half as many seeds in areas where Fusarium is around. Tewksbury studied wild chillies across 1,000 square miles of Bolivian rainforest. Those at the south-western corner are almost uniformly loaded with capsaicinoids, while most of those in the north-eastern corner aren’t hot at all. That seems puzzling: if being hot affords such valuable protection, why aren’t all chillies as pungent as possible? Back in 2008, Tewksbury suggested that the fungus was responsible – it’s more common in the south-western area. With less pressure to defend themselves, the north-eastern chillies could afford to be milder. But this explanation was never entirely convincing. Even in the north-east, the fungus was still a significant threat. Now, Tewksbury has a different idea. He thinks that being a red hot chilli pepper comes at a price: hot chillies suffer when it’s dry. The chillies in Tewksbury’s patch of Bolivia experience very different levels of rainfall: the south-western corner is drenched in rain, and the north-eastern one is relatively dry. Tewksbury mimicked these conditions in a greenhouse. When he gave the chillies all the water they wanted, all of them did equally well. When he deprived them of water, the ones that were fortified with capsaicinoids produced half as many seeds as their milder cousins. The hot plants have 40 percent more pores – stomata –on the undersides of their leaves, so they’re more likely to lose water when it’s dry. The milder plants, with their relatively sparser stomata, are better at retaining water. It might seem strange that hot flavours and drought tolerance could be so intimately connected. But Tewksbury thinks that the genetic changes which alter levels of capsaicinoids in the chillies’ fruits also affect the number of stomata in their leaves. He now wants to work out what these changes are. On top of that, chillies produce capsaicinoids using the same sets of chemical reactions that produce lignin – the sturdy substance that coats their seeds. If they’re channelling their resources into defensive chemicals, they might not have enough to protect their seeds. The fact that not all chillies are hot shows two important lessons about evolution. First, living things live in a world of varied restrictions, and something that’s adaptive in one place (like pungent chemicals) could be your downfall in another. Second, living things aren’t made from independent modules – it’s very difficult to tinker with one bit without affecting something else. For the chillies, the ideal situation would be to pack defensive chemicals while still resisting drought – that doesn’t seem possible. People often think that evolution is about progress and improvement; in reality, it’s more often about compromise and trade-offs. Reference: Haak,McGinnis, Levey & Tewksbury. 2011. Why are not all chilies hot? A trade-off limits pungency. Proc Roy Soc B http://dx.doi.org/10.1098/rspb.2011.2091More on chillies: The fiery taste of chillies is a defence against a fungusPhoto by Daniel Risacher