The fiery taste of chillies is a defence against a fungus

Food from countries all over the world owes a lot of its flavour to a fungus. The species in question isn't one of the many edible mushrooms used for cooking, the baker's yeast that gives rise to bread, or the moulds that spread through blue cheese. It's a little known species called Fusarium semitectum and its role has only just been discovered - it's the driving force behind the fiery heat of chillies. 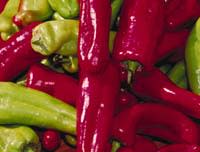 Chillies were one of the first plants from the New World to be domesticated and they have spread all over the world since. Just today, a quarter of the world's population has eaten something flavoured with chillies, be it salsa, curries or stir-fries. The chemicals behind their eye-watering bite are called capsaicinoids, and they are unique to this group of plants. Why did they evolve?

No matter what cookbooks and supermarkets tell you, chillies are fruits - fleshy parts of plants that contain seeds. Like all fruits, they serve to reward pollinators for spreading a plant's seeds, using the currency of nutritious pulp. But these same nutrients make fruits a ripe target for other unwelcome species that aren't involved in pollination or, even worse, eat the seeds. To deter these unwanted fruit-eaters, plants defend themselves with toxic chemicals, such as capsaicinoids.

Take the chillies. Their seeds pass through the guts of birds, their major pollinator, unharmed but they fail to sprout after being eaten by mammals. Birds, however, lack the receptors that sense capsaicinoids and trigger the burning sensations that mammals like ourselves experience all too readily. So it's tempting to view capsaicinoids as a mammal-deterrent, but Joshua Tewksbury at the University of Washington found that this isn't the whole story.

Working in Bolivia, Tewksbury found that while mammals are an occasional nuisance, the biggest threat that chillies face are microbes, which are also after the sugars and nutrients they contain. One species in particular - Fusarium semitectum - rots the fruits and kills the seeds, and it's the only major cause of damage to the plant. If the capsaicinoids are intended to defend the plant against any threat, then surely it was this fungus.

To test this idea, the research team compared chilli plants across a 1,000 square miles of Bolivian forest. At the south-western end of this area, almost every single chilli is loaded with capsaicinoids and packs jalapeno-level heat. Head up north and east and the fruits become less and less pungent so that at the north-eastern corner, more than 70% of chillies lack any capsaicinoids at all, and those that do have less than a third of the levels found in their spicier peers. 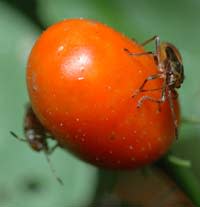 Tewksbury compared the ability of these different fruits to resist infection by placing cages over them that would block out their bird pollinators but let in small bugs like aphids and treehoppers. Their biting mouthparts are the vessels that Fusarium stows away on. When they pierce the chillies to suck their juices, they also seed them with fungus and their bites leave a telltale scar on the fruit's surface.

These experiments revealed that the north-eastern chillies weren't just weaker in taste - they were also weaker against Fusarium. Lab experiments have revealed that capsaicinoids kill off a variety of microbes, and compared to the weak capsaicinoid-free chillies, those that were loaded with these chemicals had half the amount of seeds that were infected by the fungus.

To rule out the possibility that some other factor was responsible for protecting against Fusarium, the researchers mixed up different pots of jam that mimicked the nutrients of chillies but had differing levels of capsaicinoids. As expected, they ports found that the fungus was least able to grow in pots with the highest concentrations of these pungent chemicals. In fact, at the concentrations of capsaicinoids found in the spiciest natural peppers, the fungus's growth was slashed exactly by half, showing that these chemicals and they alone were responsible for safeguarding the chillies.

If capsaicinoids are so important, why are some of Bolivia's chillies weak? The answer is simple - Fusarium, and the bugs that spread it, are rare in these areas and the fruits have far less need for defensive measures. In the northeast, where chillies are milder, Tewksbury found very few of the bug-made scars that indicate entry by the fungus, whereas the hotter chillies in the southwest were rife with them.

So the presence of fungi and bugs cause some chillies to defend themselves with chemical weapons, and this evolutionary pressure is at least partially responsible for the wide variations in chilli strength. It might also explain why humans started eating chillies in the first place.

Tewksbury suggests that our ancestors may have first started using and domesticating chillies for their ability to kill of nasty microbes. Before refrigerators became commonplace, the fungi and bacteria lurking within our food were a massive problem, and it's possible that our ancestors developed a taste for spicy food precisely because the chemicals that make our eyes water also cause trouble for contaminating bugs.