Why are stabby mantis shrimps so much slower than punchy ones? 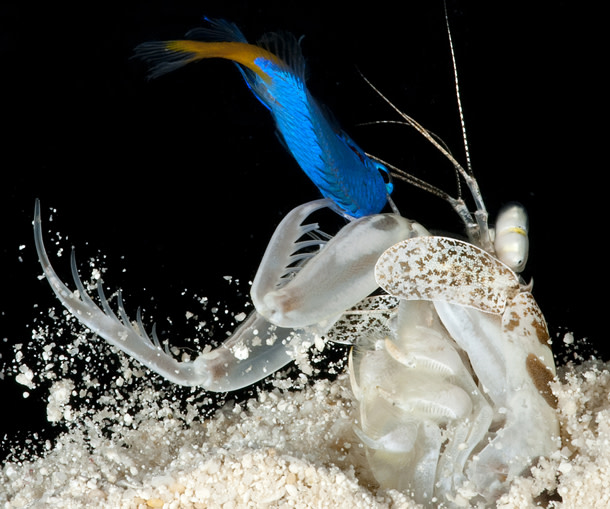 If you want to find an ocean animal that kills with speed, don’t look to sharks, swordfishes, or barracuda. Instead, try to find a mantis shrimp. These pugilistic relatives of crabs and lobsters attack other animals by rapidly unfurling a pair of arms held under their heads. One group of them—the smashers—have arms that end in heavily reinforced clubs

, which can lash out with a top speed of 23 metres per second

(50 miles per hour), and hit like a rifle bullet. These powerful hammers can shatter aquarium glass and crab shells alike. Most research on mantis shrimps focuses on smashers, but these pugilists are in the minority. The majority are “spearers”, whose arms end in a row of fiendish spikes, rather than hard clubs. While the smashers actively search for prey to beat into submission, the spearers are ambush-hunters. They hide in burrows and wait to impale passing victims. They’re Loki to the smashers’ Thor. Given their differing lifestyles, you might expect the spearers to be faster than the smashers. They rely on quick strikes to kill their prey, and they target fast victims like fish and shrimp rather than the tank-like, slow-moving crabs favoured by smashers. But surprisingly, Maya DeVries

from the University of California, Berkeley, found that the fastest spearer strikes at just a quarter of the speed of the fastest smasher. Working with Sheila Patek, who first properly measured the smashers’ record-breaking punches

, is the largest mantis shrimp in the world—DeVries worked with individuals were just 13 to 17 centimetres long, but they can grow to 40. She teased her spearers with frozen shrimps, and filmed them with high-speed cameras as they launched out of their burrows. [embed width="610"]http://youtu.be/Pm2afaiXr0c[/embed] The footage revealed that the smaller A.vicina reached a top speed of just 5.7 metres per second, and the bigger L.maculata had a top speed of just 2.3 metres per second. That’s fast for a punch that moves through water, but pathetically slow compared to the 23 metres per second record of a peacock smasher. The strikes took longer too. The peacock connects with its target in 2.7 milliseconds, while A.vicina takes 3.2 milliseconds, and L.maculata takes 25 milliseconds. The difference between the two species is surprising in itself: you’d expect the bigger animal to be faster than the small one because of its larger muscles. To understand why L.maculata is slower, you need to understand the anatomy of a mantis shrimp’s arm. A smasher would never be able to achieve its record-breaking speeds if it simply flicked its arm out like a human boxer. Instead, it first stores up energy. Once its cocks its arm back, a small latch locks the club in place. The animal tenses its large muscles and builds up energy, which is released all at once when the latch lets go. (To see the difference in speed and power, try flicking out your index finger on its' own, and then hold holding the tip against your thumb first.) There’s also a saddle-shaped structure that compresses like a spring when the arm is cocked. As the latch releases, the spring expands and provides extra push for the speeding club. Both spearers have the same features, and the small one carries out spring-loaded strikes just like the smashers. But L.maculata doesn’t—it never engages its saddle-shaped spring, and powers its strike entirely by contracting its muscles. Maybe at that size, the spring just doesn’t work very well, or the big muscles provide enough force. But the spearers that DeVries studied were just as big as many of the smashers from previous research—if the latter could engage their springs, the former should be able to as well. 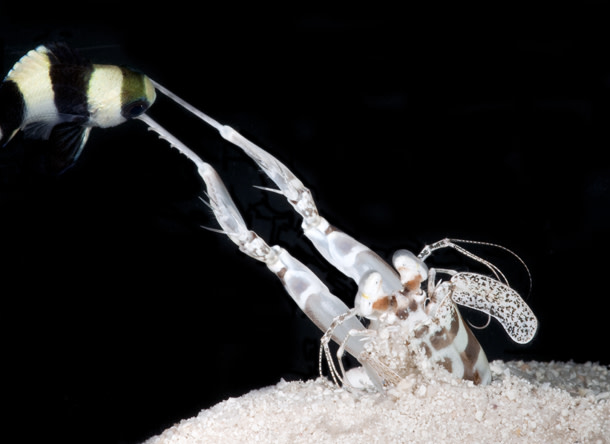 To check that the captured mantis shrimps weren’t just being sluggish, DeVries went out into the field. She spent three weeks swimming around the sandy flats and mangroves of Lizard Island, Australia, filming wild zebra spearers. And she saw the same thing – the wild individuals caught prey with strikes that were just as slow as their captive peers. Obviously, that’s fast enough to capture fish and shrimp, or the spearers would have starved themselves extinct by now. So perhaps the right question isn’t why the spearers are so unexpectedly slow, but why the smashers are so ridiculously fast? The traditional assumption is that fast speeds are for capturing fast prey – think falcons and cheetahs. But DeVries suspects that the smashers have extreme punches so generate extreme accelerations and extreme forces. A spearer needs one successful strike to impale its prey. A smasher needs many strikes to cripple its quarry. It doesn’t need speed to deliver a quick punch; it needs speed to deliver a punishing one. Reference: DeVries, Murphy & Patek. 2012. Strike mechanics of an ambush predator: the spearing mantis shrimp. J Experimental Biology http://dx.doi.org/10.1242/jeb.075317