Why Are Some Mountain Ranges Volcanic and Others Not?

The Andes and the Himalayas are the two of the largest mountain ranges on Earth, yet one is full of volcanoes and the other isn't. Why are they different? 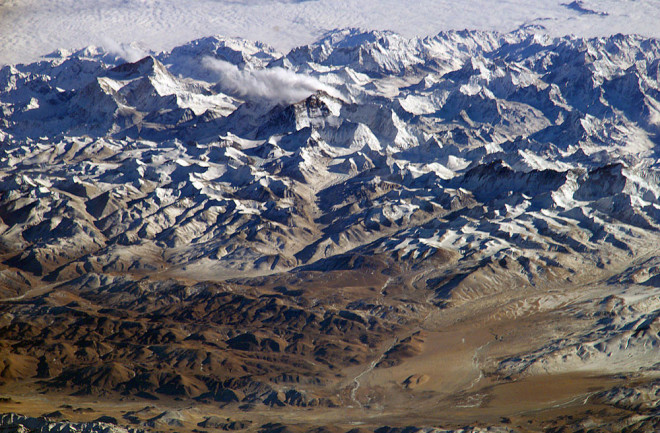 A view of the Himalayas and Mount Everest seen from the International Space Station. Credit: NASA.

I was looking at the geology subreddit the other day and someone asked an intriguing question: why aren't the Himalayas volcanic? They are the largest mountains on the planet and span thousands of miles but nary a volcano can be found. This might seem strange to many people as there are mountain ranges that are full of volcanoes -- the Andes and the Cascades for example. Why are they different?

What it boils down to is the different ways the Earth's tectonic plates interact. Sometimes when they collide, you just build big mountains and other times you get mountains and volcanoes.

The Himalayas are enormous, running over 1,400 miles from end to end. The multitude of 25,000+ foot mountains in this range is astonishing, with a full 18 peaks reading that elevation. Yet, none of those mountains are volcanic. Instead, they are built by the collision of two tectonic plates that has been going on for tens of millions years.

A schematic of the collision of the Indian subcontinent with Eurasia. Credit: US Geological Survey.

The Indian subcontinent and Eurasian are at odds with each other. India has been moving steadily northward and when it struck Eurasia, things got messy. Both plates are continental, so they are made of relatively low density rocks like granite and sandstone. They are also tens of miles thick, so when India hit Eurasia, it was like a car smashing into a giant wall.

That ongoing collision is what drives up the mountains. The crumpling and stacking of the two continents as that tectonic energy mashes them together keeps the land surface moving up faster than all the forces of weathering and erosion can bring it down. With that, you get towering peaks like Everest and K2.

A view of the Andes in northern Chile seen from the space shuttle Endeavour. Credit: NASA.

Just like the Himalayas, the Andes are a chain of large mountains. The Andes are actually a much longer chain, running 5,500 miles down the west coast of South America. The mountains themselves aren't as tall as the peaks of the Himalayas. The tallest Andean mountain is Aconcagua (which, incidentally, is not volcanic) that comes in at ~22,800 feet, a full 7,000+ feet shorter than Everest. That being said, there are dozens of mountains in the Andes that are taller than 20,000 feet.

Unlike the Himalayas, two continents aren't colliding to form the Andes. Instead, the South American continent is interacting with oceanic tectonic plates that are more dense and much thinner than continental plates. This means that when they slam together, instead of both plates crumpling, the oceanic plate just gets jammed underneath the thicker, less dense continent. There is still stress that happens that can cause the South American continent to crumple a little and get thicker, raising that land surface, but nothing like the Himalayas.

The tectonics of the Andes. Credit: Wikipedia.

The consequence of this type of collision is the oceanic plate dives into the Earth's hot mantle. Now, the mantle isn't a sea of molten rock but it is hot, just not hot enough to melt. However, if you add some water to those mantle rocks, their melting point drops much like how water melts at a lower temperature when you add salt.

The oceanic plate, with all the ocean sediment and altered basalt, is chock full of water. So, as it goes down and heats up, it releases that water into the mantle under the Andes and suddenly you have magma. That magma rises to create the thousands of volcanoes that litter the Andes from Colombia to the Tierra del Fuego.

We call the style of tectonic interaction in the Himalayas a continental collision, which is an intuitive enough name. Because neither plate is being fed back into the mantle to deliver any water, little-to-no magma form and you don't have any volcanoes.

The Andes are what we call a subduction zone, which is a much less intuitive name. However, what you can try to remember is submarines go under water like an oceanic plate goes under a continent. Melting happens thanks to all the liberated water and you get volcanoes.

Both of these boundaries are convergent as plates are moving towards each other, so beyond building mountain, the Andes and Himalayas are also a focus of earthquakes. Interestingly, although you might think that two continents mashing into each other would make bigger earthquakes, it is the subduction zones that hold the record for largest known earthquakes.

Now, there are still other ways to get mountains to form, but at least in terms of the biggest chains on Earth today, it is the collisions of plates that creates them. However, all collisions aren't the same leading to the giant and non-volcanic Himalayas and the less-giant but highly volcanic Andes.