Why Are Gray Whales Moving to the Ocean Next Door?

For the first time in thousands of years, the massive creatures of the Pacific are finding their way across the Arctic to the North Atlantic. But trouble may await them. 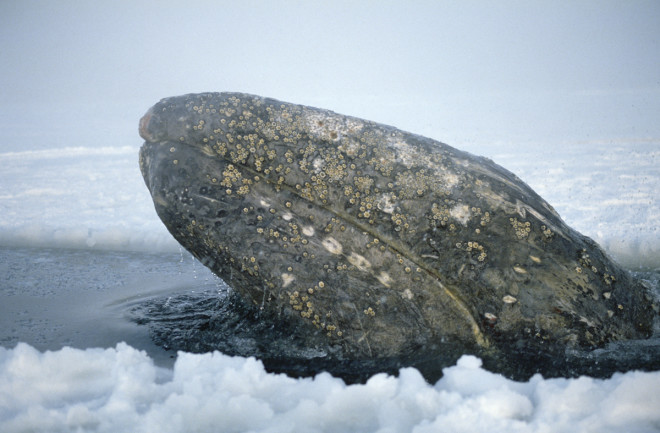 A gray whale finds its way amid the ice off the Alaskan coast. (Credit: Michio Hoshino/Minden Pictures)

In 2010, when marine biologist Aviad Scheinin posted a photo online of a gray whale off the coast of Israel, his fellow scientists weren’t buying it. “Nice Photoshopping,” one researcher responded. “Is this April Fools’?” another replied.

Their skepticism was understandable. The species had not been seen outside the Pacific Ocean since the 18th century, when whalers are thought to have harpooned the last Atlantic gray whale. But in 2013, another was spotted even farther afield, off the Atlantic coast of Namibia in southern Africa, where it lingered for a month before swimming off.

Until recently, the Arctic’s wall of sea ice made such polar ocean-hopping impossible. Whales need to surface every few minutes to breathe and cannot venture under frozen seas. But increasingly warmer summer temperatures are melting the ice of the Bering Strait and Northwest Passage, opening a water highway between the Pacific and the Atlantic.

If gray whales do migrate to the ocean next door, they’ll find that a lot has changed in the Atlantic since the species last plied its waters, including increased ship traffic and higher temperatures. At the same time, says biologist Elizabeth Alter of the City University of New York, these 40-ton bulldozing bottom feeders could have an oversized impact on their new home — for good and for ill.

“Both the physical ocean and the life within it are shifting much more rapidly than our models predicted for the Arctic,” Alter notes, adding that temperatures there are rising twice as fast as everywhere else on the planet.

A full-on return to the Atlantic would be an evolutionary homecoming for the species; gray whales lived in the Atlantic for thousands of years. Alter believes traces of these gray whale ancestors hold hints of the species’s future. In determining how gray whales responded to historical shifts in the environment, she may be able to help chart what lies ahead for this sensitive “indicator species” — as well as the larger ecosystem.

This 2010 photo of a gray whale off the coast of Israel surprised marine biologists, who believed the species was confined to the Pacific Ocean. (Credit: Aviad Scheinin/Israel Marine Mammal Research and Assistance Center)

Whales on the Move

Every year, the nomadic grays take two to three months to swim from the lagoons of Baja California, where they breed and nurse their young, to the feeding grounds off the coast of Alaska. It’s one of the longest migrations of any mammal, a round-trip trek of nearly 12,000 miles every year. Once in northern seas, the whales plow the bottom mud and strain it through flexible baleen plates for tiny, shrimplike creatures and tube worms, fattening up each summer for the return journey south.

But as temperatures rise, these age-old patterns are changing fast. The timing of the migration has shifted: The whales are leaving their calving grounds earlier and coming back later. Their feeding grounds move steadily north, and evidence suggests some even spend the winter there. And the whales are beginning to feed at various depths as well as along the sea floor, a shift that may have to do with changes in the population densities of their prey.

Even against the backdrop of these changes, the 2010 and 2013 sightings in the Atlantic took biologists by surprise. Those first two gray whale pioneers, which threaded their way through the icy labyrinth of the Northwest Passage into the North Atlantic, accomplished this feat by dumb luck, according to Alter. But now, with the ice receding farther every summer, she says, “the current trickle of strays may turn into a steady stream,” though that could take decades or even centuries.

How will these colonizers fare in the Atlantic after all this time? The best guess comes from past population patterns. For years, Alter and her colleagues have meticulously reconstructed the history of the species using subfossils — ancient bones that, unlike true fossils, are not yet fully mineralized and still contain minute traces of DNA.

Extracting genetic material from these ancient bones is a meticulous practice. At the American Museum of Natural History in New York, where Alter is a research associate, she pauses by a wall of steel shelving in the museum’s cavernous basement. It holds ribs the size of small logs and 6-foot-long mandibles — modern bones similar to the subfossils Alter has studied. She points to a black smudge discoloring the surface of a flanged whale vertebra. “We scrape off this dark material, which contains traces of bacterial DNA,” she explains. “Then we drill out a tiny wedge of spongy bone matrix and grind it into a fine powder that we use to extract the DNA in the lab.”

That DNA was hard-won. When Alter first had the idea to trace the history of gray whales from subfossils in the early 2000s, she quickly hit a major snag; gray whale subfossils are hard to come by. Most lay widely scattered on the bottom of the sea. With little material to work with, the project languished for a year.

Then in 2005, she met evolutionary biologist Michael Hofreiter, then at the Max Planck Institute for Evolutionary Anthropology, who shared some extraordinary news: Dutch trawlers raking the mud of the North Sea dredged up a cache of gray whale subfossils, the largest ever discovered. “I almost fell out of my chair,” Alter recalls. She and Hofreiter teamed up to tease out the story hidden within their new trove.

“Now, for the first time, there was enough material to conduct a really thorough study,” Alter says.

Analyzing this Atlantic material and comparing it with DNA from the Pacific from the same time period, Alter and Hofreiter discovered that grays moved freely between the Pacific and the Atlantic on at least three separate occasions during the late Pleistocene and the Holocene, periods when temperatures were warmer and sea ice was light. (The most recent migratory “pulse” ended about 5,000 years ago.) And based on the genetic diversity in the samples, Alter’s team estimated in 2007 that the archaic population was three to five times larger than it is today.

Nicholas Pyenson, curator of fossil marine mammals at the Smithsonian Institution, reached a similar conclusion after analyzing earlier gray whale fossils from the Pleistocene. Not only are gray whales no strangers to the Atlantic, it seems they’ve thrived there under warmer conditions.

These insights into the gray whale’s past have left researchers guardedly hopeful about their future. Gray whales are accustomed to traveling far and exploring new areas. And throughout their long history, grays have been “generalists,” not tied to only one food source or feeding method. While they’re sensitive to change, they are also, it turns out, quite resourceful in responding to it. “They’re a good example of a species that will likely adapt to global climate change better than other less behaviorally flexible whales,” Pyenson says.

But the Atlantic today is different from the ocean the grays once swam in. The whales that return to their ancestral home will have to cope with a greater risk of fatal collisions with ships than in the Pacific. They may have to dodge oil- and gas-drilling operations in the Arctic and the North Atlantic as well as deafening sonar blasts. And as the climate changes, their food sources, from phytoplankton to tiny crustaceans, may shrink.

The whales, in turn, could affect their new neighborhood if they arrive in large numbers. Like beavers, gray whales are ecosystem engineers whose activities transform the places where they live. They stir up enormous plumes of mud while bottom-feeding, for instance. But just what effect they’ll have is unknown.

Studying the ancient DNA of gray whales has opened a new door into how ecosystems have changed over time — and underscores the unprecedented pace of change in today’s human-altered world, Alter says.

“With human-caused climate change, we’re running a vast, unintended ecological experiment,” she says. “We simply can’t say yet what the results are going to be. But it is clear that the consequences for gray whales — and for the oceans they inhabit — will last well beyond our lifetimes and our children’s lifetimes.”

This article originally appeared in print as "Why Are Gray Whales Moving to the Ocean Next Door?"